For more than a decade, two identical concepts have coexisted in the information technology world — DevOps and Site Reliability Engineering (SRE). At first glance, they may seem like rivals. But a closer look reveals that the supposed competitors are supplementary pieces of the picture that complement each other perfectly.

This article defines DevOps and SRE, describing how they make it easy to build robust software, where they overlap, how they differ, and when they can work together effectively. 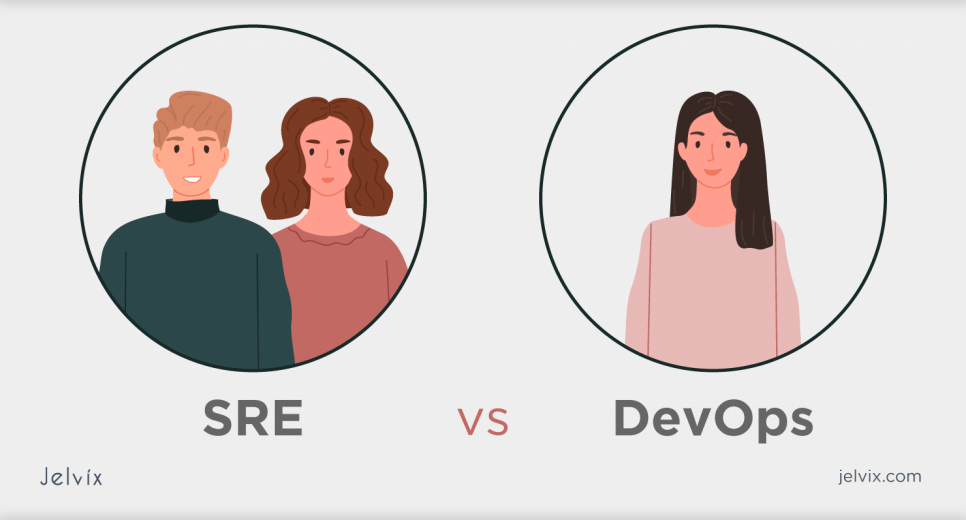 The first question we are going to answer is “What does SRE mean?” SRE stands for Site Reliability Engineering. In a few words, SRE teams solve operational, scaling, and reliability issues.

This approach arose in the early 2000s at Google to keep a large, complex system running for over 100 billion queries a day. According to Ben Traynor Sloss, Google’s VP of Engineering, who invented the term SRE, “SRE is what happens when you ask a software engineer to design an operations team”.

SRE’s focus is on system stability, which is measured as the most fundamental characteristic of any product. The pyramid below picturizes the elements that affect reliability, from the simplest (monitoring) to the most complicated (reliable product launch). 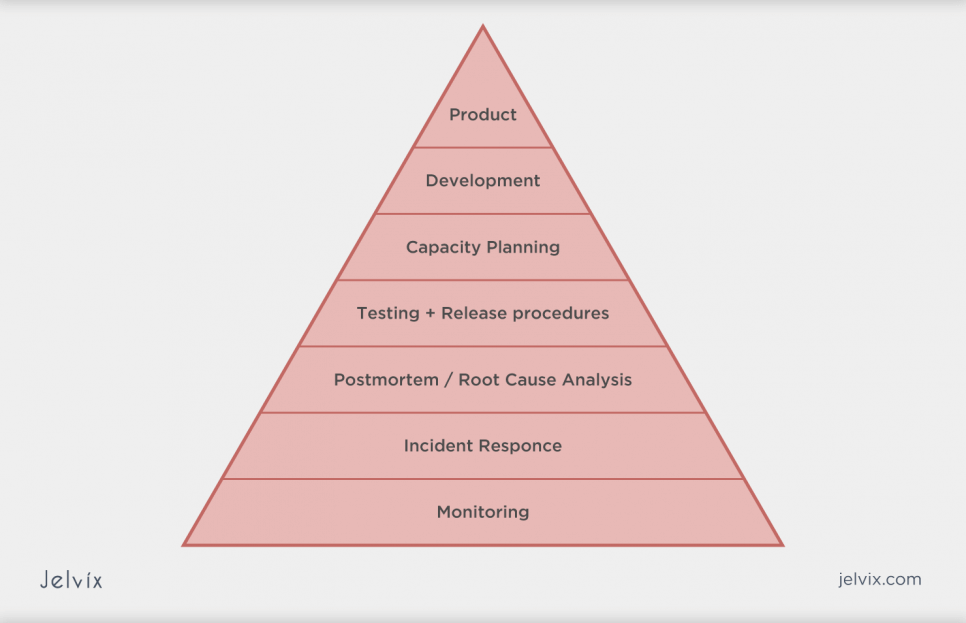 As soon as the system becomes “sufficiently reliable”, SRE changes efforts to adding extra features or building new products. In addition, there is a strong focus on results tracking, measurable productivity improvements, and operational task automation.

DevOps is a set of cultural principles, approaches, and tools that improve the ability of companies to build applications and services at high speed. With DevOps, product development and optimization are faster than traditional software and infrastructure management processes.

Patrick Debois, a Belgian IT consultant, and Agile practitioner invented the term in 2009. Its main principles are similar to those of SRE: applying engineering methods to operational assignments, measurements, and using automation instead of tedious tasks. But its focus is much wider. 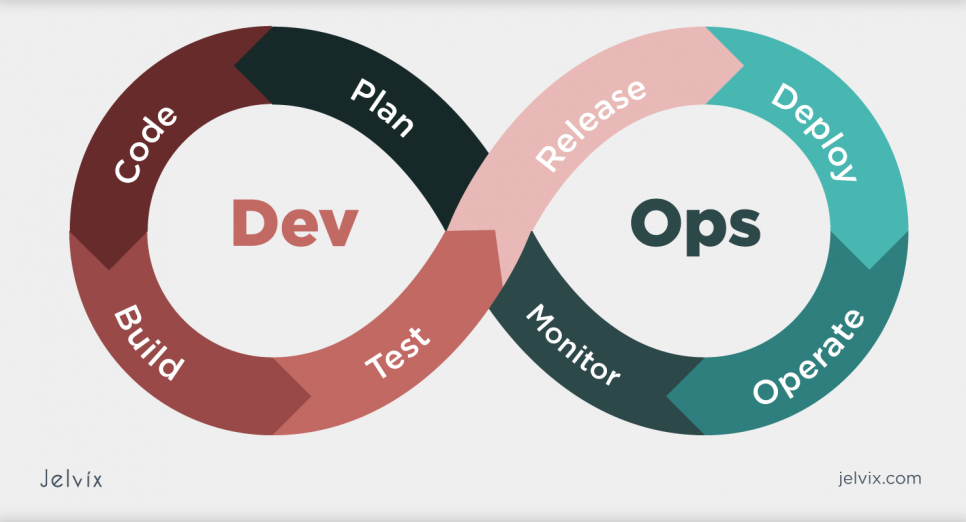 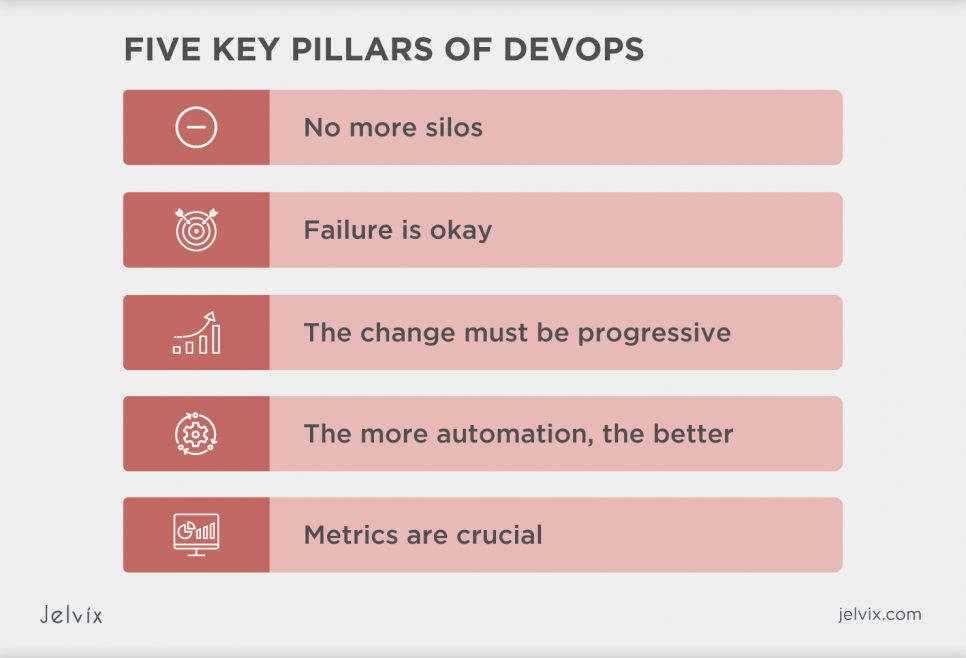 How is SRE Related to DevOps?

SRE and DevOps are not competitors since SRE provides a hands-on approach to solving most DevOps problems.

Now, let’s take a look at the way teams use SRE to implement DevOps principles and philosophy:

Both DevOps and SRE use automation to make better processes and service delivery. While DevOps encourages the adoption of automation tools, SRE guarantees that every team member can access updated automation instruments and technologies. SRE allows teams to share the same tools and services through scalable application programming interfaces (APIs).

The DevOps task ensures that different software development departments/teams work harmoniously on a common goal. SRE achieves this by sharing ownership of projects between teams. With SRE, every team uses the same instruments, methods, and codebase to support uniformity and smooth cooperation.

Summing up, both can be viewed as leveraged resources. There is no 1:1 ratio in DevOps vs. software engineers or site reliability engineers. O’Reilly’s Building Safe and Reliable Systems compared to the first edition of the Google SRE book discusses the command structure that poisons SREs as consultants/experts.

Creating solutions at scale requires specialized engineers to help solve issues and expand opportunities. DevOps engineers, SREs, and other experts such as application security engineers fall into specialized consultants. Google, in its SRE book, describes all the experience in several areas required to deploy and support a product like Gmail.

Matthew Flaming, the vice president of software engineering at New Relic Application Software Monitoring, depicts software reliability engineering as “the clearest embodiment of DevOps principles in one role.” That being said, the SRE and DevOps toolbox can be largely the same and typically includes the following items:

In recent years, the roles of SRE and DevOps have become critical in lots of organizations. But that doesn’t mean everyone agrees on exactly what the SRE and DevOps teams are doing. Similarly, there is no one-size-fits-all job description for DevOps and Site Reliability Engineer. Below we will highlight the most important points of the DevOps and SRE functions.

The SRE Role and the SRE Team 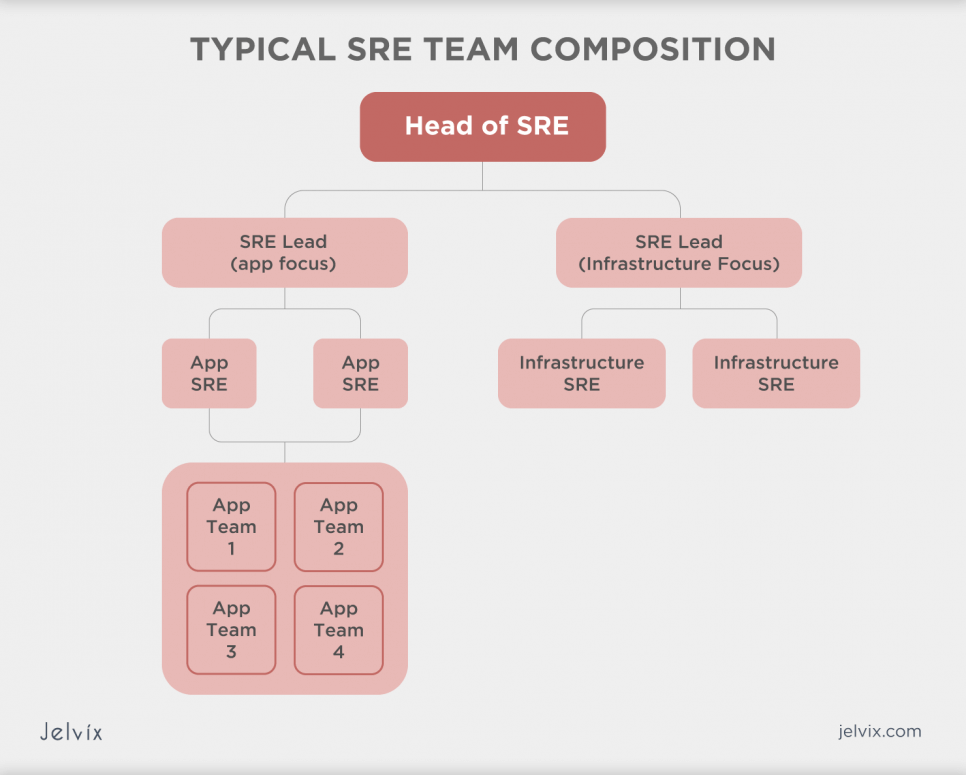 In addition to operations and software development, areas of expertise relevant to the SRE role include monitoring systems, factory automation, and systems architecture.

So, what does a site reliability engineer do? All SRE team members share duties for code deployment, system support, automation, and change management. And the goal of each site can be changed by a reliability engineer over time depending on the existing focus of the team — creating new functions or increasing system reliability.

Unlike the SRE team, where each expert is a do-all, the DevOps team consists of various experts with particular duties.

The team structure varies from organization to organization and commonly includes (but is not bound to) the following experts:

For sure, this is not a comprehensive list of DevOps roles. Commonly, such a cross-functional team invites an SRE to assure the availability of services. Usually, when site reliability engineers work as part of a DevOps team, they have a more restricted scope of duties than in fully dedicated SRE teams.

Difference Between Job Roles of SRE and DevOps

The differences between SRE and DevOps in terms of work roles are best explained by the day-to-day tasks of the people working in those roles.

On the other hand, DevOps engineers typically focus on: 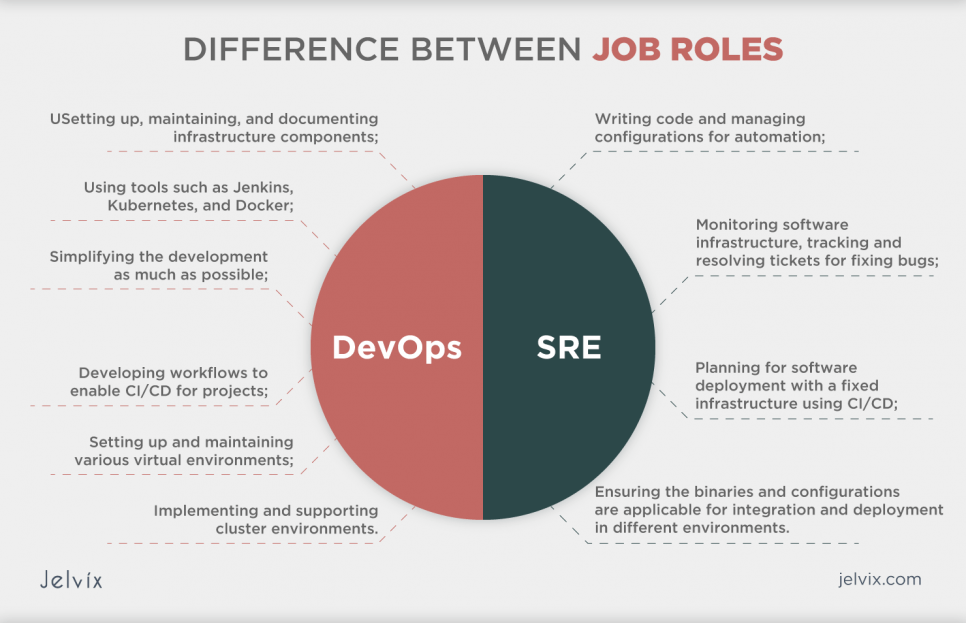 Both approaches enable minimal separation between development and operations teams. But we can summarize the main distinction as follows: DevOps concentrates more on cultural and philosophical shifts, while SRE is more pragmatic and practical.

In the table below, we highlighted the key distinctions in the way the concepts operate: 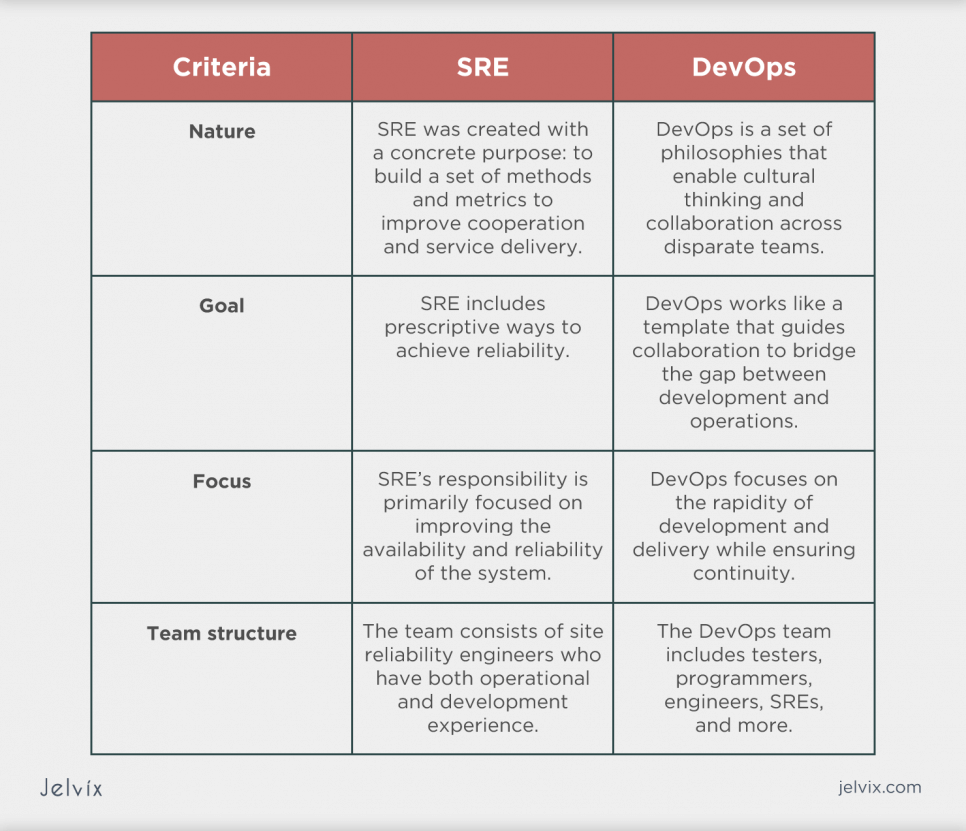 What’s the Difference Between DevOps and SRE? 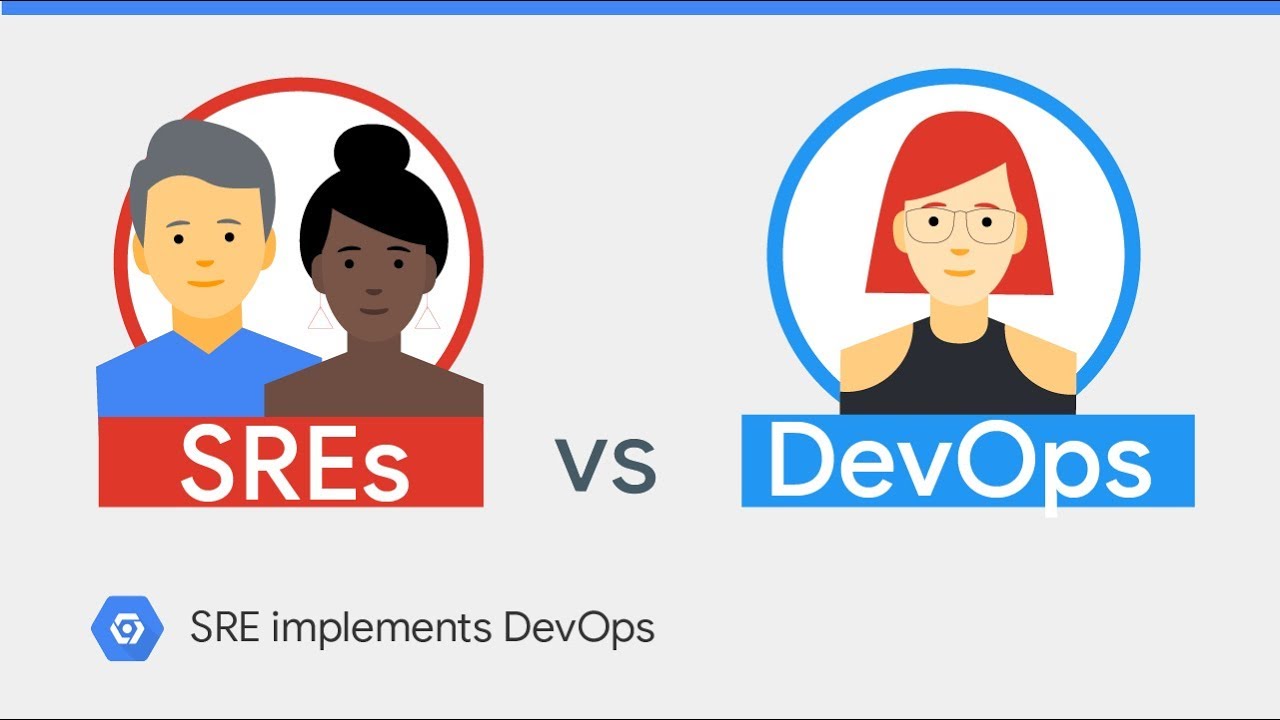 When do Businesses Need DevOps and SRE?

Despite all the misunderstandings, one thing is the truth: site reliability engineers and DevOps are not contradictory factions, but rather two relatives working towards the same purpose and with the same instruments, but with slightly distinctive focuses.

While the SRE culture values reliability over the speed of change, DevOps instead emphasizes scalability throughout the product development cycle. Although, both approaches try to find a balance between the two poles and can complement each other in terms of methods, practices, and solutions.

Depending on their size and goals, businesses can implement various DevOps scenarios, SREs, or even combinations of both.

Modeled after Google, SRE teams are suitable for large technology corporations such as Adobe, Twitter, or Amazon that handle billions of requests daily and prioritize the availability of their services.

DevOps culture and cross-functional teams benefit any business operating in a highly competitive environment where even a bit shorter time-to-market provides a huge advantage. Besides, the DevOps team can be reinforced with a site reliability engineer to control system performance and guarantee system stability.

Some companies have two teams, SRE and DevOps. The first one is answerable for supporting and maintaining the present service, while the latter builds and delivers new apps.

Whatever the size of your business is, someone in your company is probably already doing SRE work, facilitating collaboration between developers and IT, or writing scripts to automate tedious tasks. If you find these people and formally identify their work, they can form the foundation of a performative SRE or DevOps team, whatever you prefer.

Which is Better DevOps or SRE for Your Career?

According to PayScale, a DevOps annual salary is around $95,000, while the average salary for an SRE is $116,000. There must be a reason why SRE gets more. Usually, they are responsible for a variety of practical activities each day. They must monitor, code, attend calls, resolve tickets, ensure systems are available, and plan. Thus, they are usually paid more than DevOps engineers.

With the fundamentals of SRE and DevOps in mind, engineers can make informed decisions about where to build their careers, which skill sets to improve, and which industry advances to learn and follow. This helps them not only make intellectual decisions better but also create a better career structure.

So, is there a difference between DevOps and SRE? Google, the “founder” of the SRE name, has clearly defined this, along with a straightforward set of expectations. DevOps seems to be more like a “free spirit” whose definition and perspective vary from organization to organization.

However, DevOps and SRE teams aren’t all that different. Both help brings development and operator teams together while sharing similar responsibilities with a focus on automation and reliability.

Jelvix will be glad to partner with you and your organization to help achieve DevOps and SRE goals, as well as software development in general. Don’t hesitate to contact us, in case of any necessity.

Who is a DevOps Engineer?

Who is a DevOps Engineer?

SecDevOps: When The Safety Comes First

Can Agile and DevOps Get Along?