What is the Difference Between REST and SOAP?

To connect different programs and services in a single platform, developers use protocols for access and communication. Developers don’t have any need to write any necessary functionality from scratch. All there is to do is to integrate a ready service – usually, after choosing a method, like REST vs SOAP.

SOAP vs REST API entered software development a while ago and became common tools for web developers. Let’s take a look at their characteristics and differences. 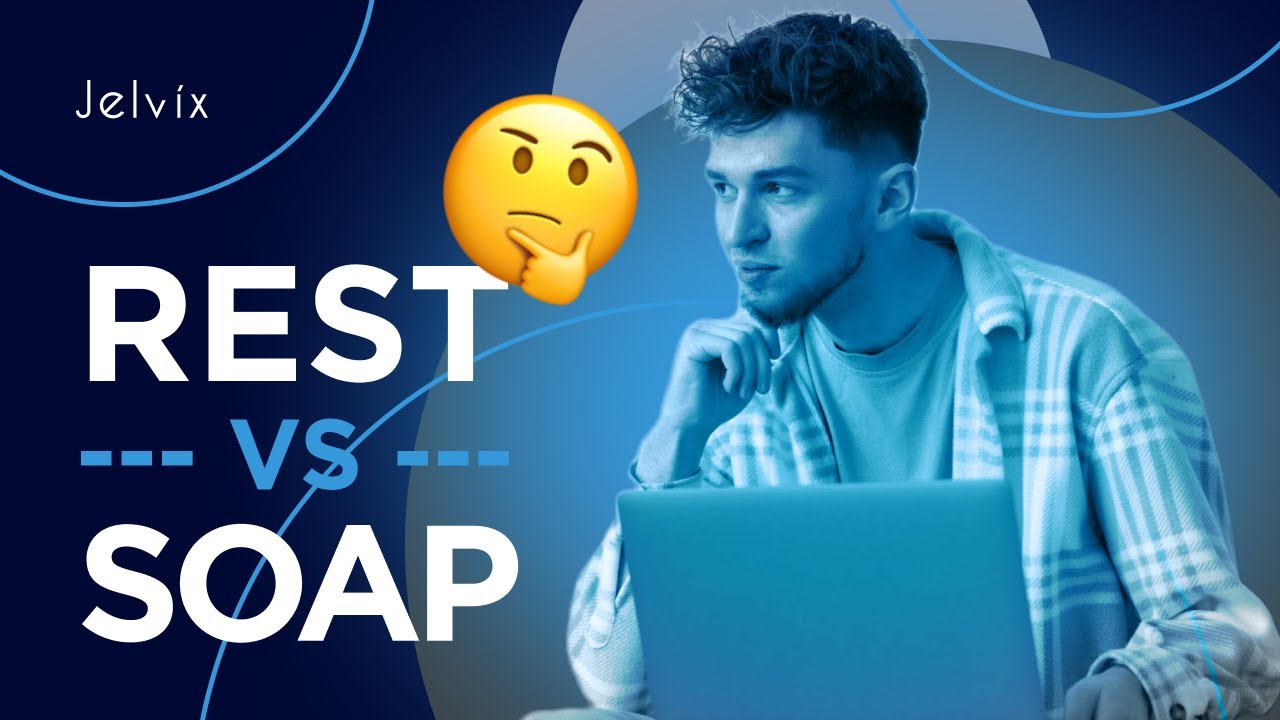 What is REST API and SOAP API

The Definition of SOAP

Each SOAP protocol is comprised of three parts:

Each message in SOAP is completely standalone and independent. All the information that you need to get a response is present in the message itself. You can predict the structure of responses based on the request – which makes a codebase more reliable and easier to control. It helps that all messages follow the same rules as well.

However, this standalone approach has disadvantages, too. When messages feature so much information by default, they become increasingly heavier and harder to navigate. Even when you are sending a very simple request, the overhead might still be a problem.

The Definition of REST

REST stands for Representational State Transfer and refers to architectural rules used when building APIs – programming interfaces that allow connecting two services and interfaces in the same codebase. Software that complies with REST architectural requirements is known as RESTful.

To be RESTful, an application needs to support multiple components and interactions. The codebase should be semantically simple, performance-efficient, and allow the introduction of additional services.

To be connected, software within REST must share a uniform interface. They should be comprised of isolated scalable components, which can be modified even in the running application.

Unlike SOAP, REST doesn’t stick to a particular standard for requests – it’s the difference between SOAP and REST. It uses URLs, HTTP, JSON, and XML. REST apps are more flexible but less predictable.

However, it’s worth taking into account that all REST APIs have different performance. Some APIs that rely on themselves as REST don’t comply with the constraints at all. That’s something a REST developer should always keep in mind. 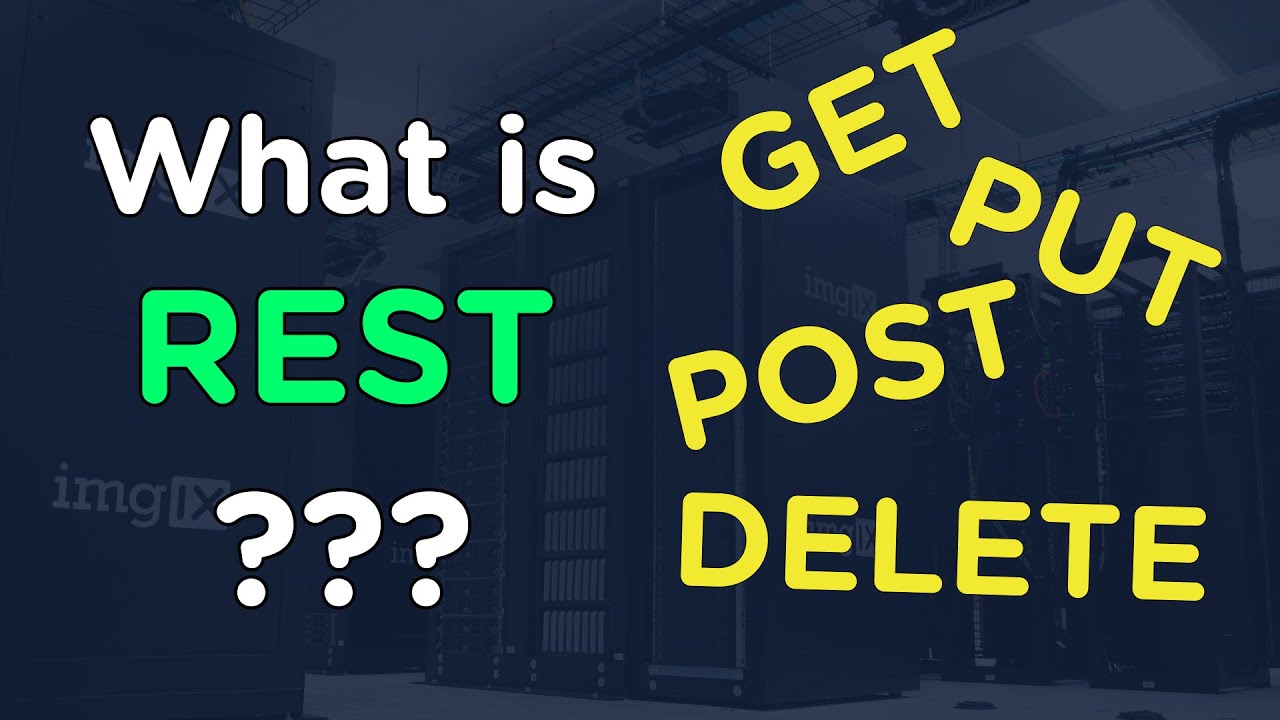 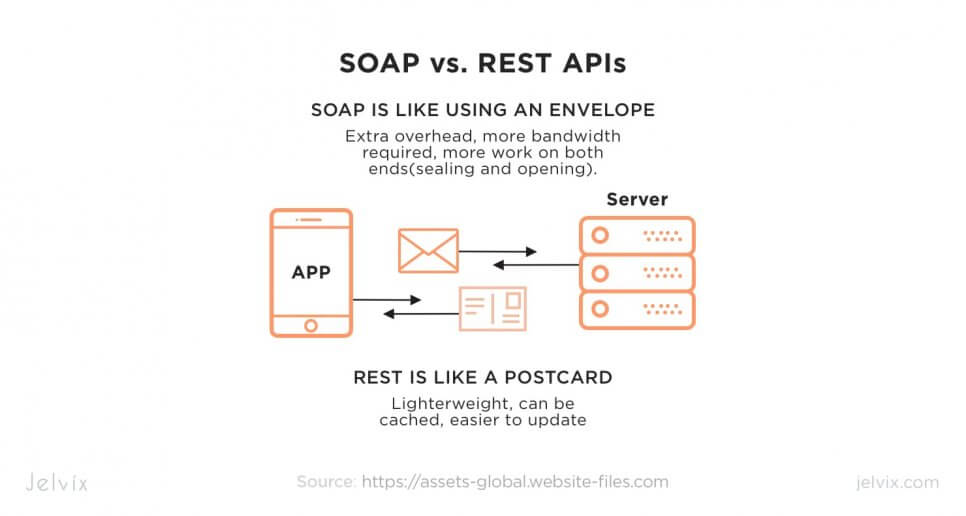 We have covered the basic differences between SOAP vs REST API, but that’s obviously not everything. Let’s dive deeper and examine more specific distinctions.

SOAP is a protocol that has a specific structure. As already discussed, the organization of the query and response sort of mirror each other. All SOAP requests have a unified look and organization. All specifications feature a WSDL file that describes the purpose of the web service, as well as its location.

REST is not a protocol; it’s an approach to architecture. The basic constraints of RESTful software, in short, are the following: REST APIs are defined as REST if they are cacheable, client-server, stateless, have a uniformed interface, and a layered system. In REST, the client-side and server-side are isolated. The backend codebase doesn’t receive information about the front-end component of the application.

So, this SOAP and REST difference has several important consequences. SOAP, being a strict protocol, uses only XML, for a unified structure. REST, on the other hand, can use HTML, JSON, XML, and plain texts – various ways of communicating. As an architecture, REST can use SOAP, but not the other way around.

SOAP is a web development version of a post. Requests are put in “envelopes” and sent to the right service and locations (all specified, just like in normal letters). These “letters” are written with XML, with its own standardization.

The basic components of SOAP are the envelope, the body (the text of the request itself), and the header (sender information and request details). SOAP also has a type-system – the system of types that developers refer to during development. 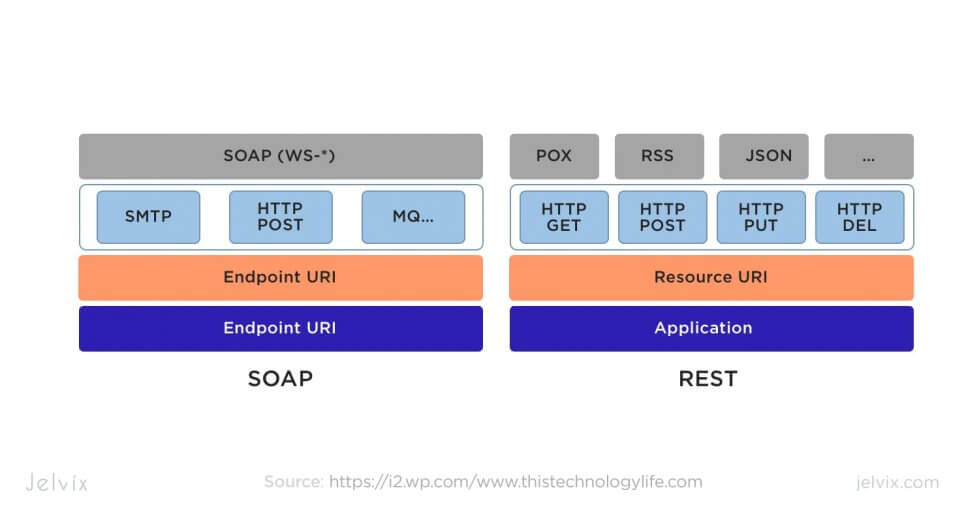 REST APIs are defined with an interface description language (IDL). Languages are used to describe an API, generate libraries, and connect APIs of different programming layers. It’s an intermediate level between services that use a different tech stack.

During development, software engineers use XML, HTML, JSON, and other ways of expression. REST isn’t tied to a single type-system, like SOAP.

SOAP, due to its higher specification, sends heavier requests and, therefore, requires more bandwidth. The protocol transfers a lot of data in a single request, and, consequently, works better with a stable connection.

REST requests, on the other hand, are lighter, since they are represented by small JSON messages. There’s no heavy type system or default specifications in headers. This is why REST is recommended for software that works in low-bandwidth conditions.

In data transfers, SOAP shows the application logic for each protocol. Protocols expose not only the location of the transfer but also a description of each service’s functionality. REST, on the other hand, focuses mainly on naming resources that will be accessed during a transfer. A request in REST is a list of URLs that a message needs to pass before achieving its target. 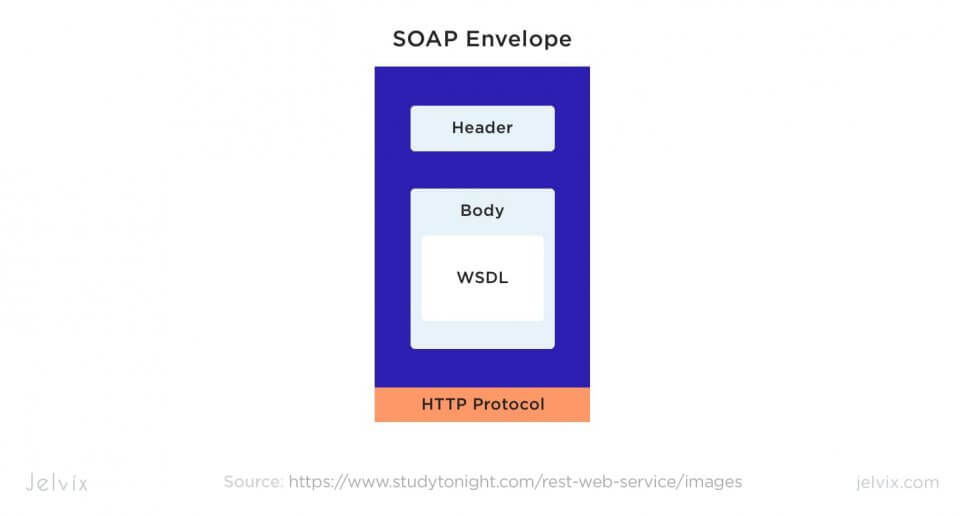 This is why you can use SOAP for operations that need to be highly controlled and described in detail. If developers want to predict the transfer and fit it into a precise typing system, SOAP is a great fit. It’s often used for money transfers, operations with confidential and personal data, legal information, etc.

On the other hand, REST requires you to specify less information – it’s faster to write and more flexible in the long run. So, unless you need this fail-proof stability, it’s advisable to use REST for most features.

SOAP is difficult to implement with the overall codebase. Developers constantly need to write a lot of specifications to set up the mandatory XML structure. On the other hand, REST doesn’t require you to change the code so much. All you need to do is list a URL and add an HTTP command (put, get, delete, or post).

REST doesn’t require you to adapt code; you can use the approach that suits your existing codebase better. For instance, the data for the transfer can be written as an RSS, JSON, or CSV. 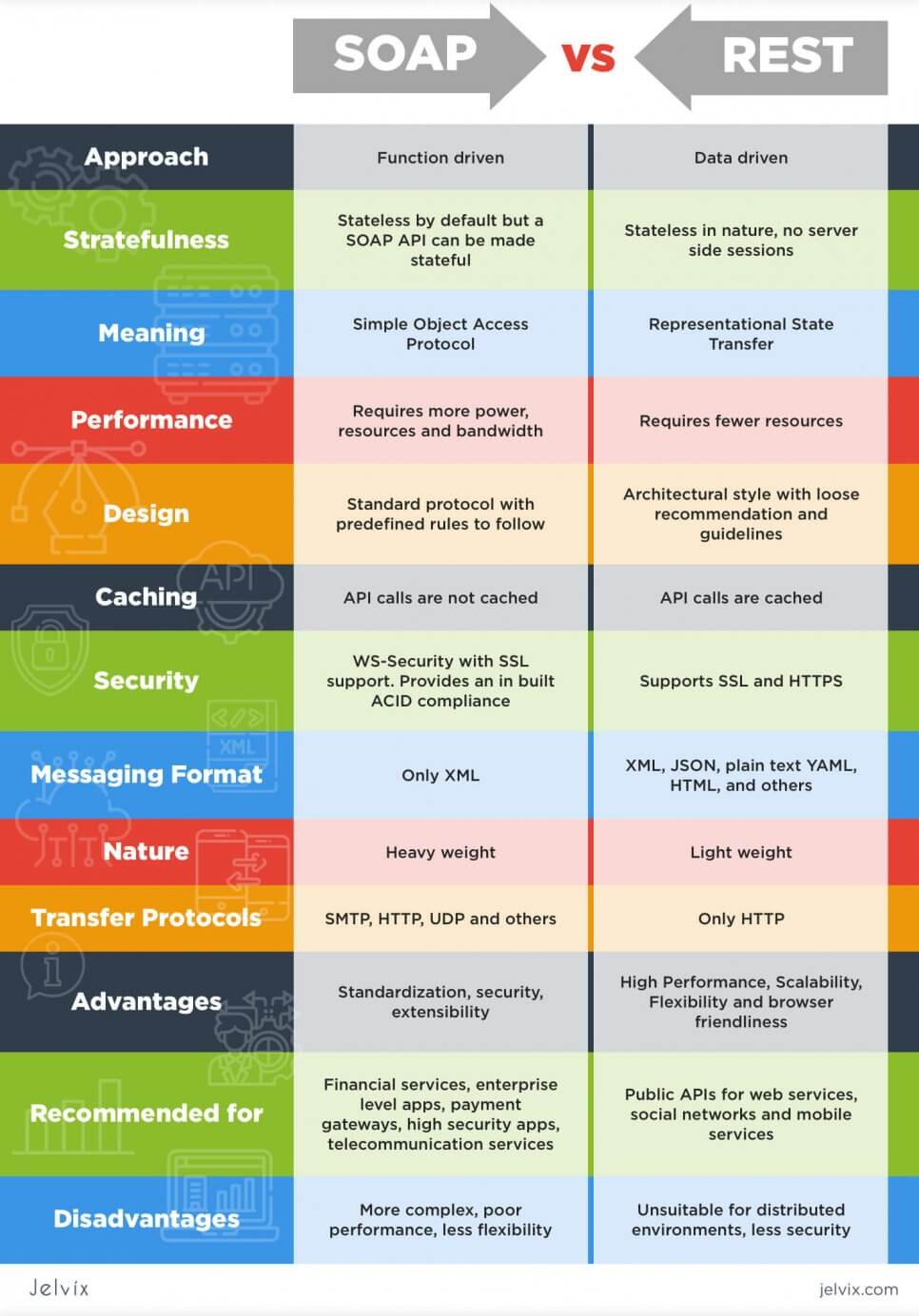 What is the Difference Between REST and SOAP: Advantages and Disadvantages

After a quick rundown of technical characteristics, we can get a bigger picture of the qualities of both REST and SOAP. How do their technical differences influence your result and development process? Let’s take a look.

SOAP has the reputation of being a safe access protocol. It’s predictable, easy to control and customize. Developers can regulate how much data is obtained in the transaction (no over-fetching or under-fetching, which are quite common in REST).

If SOAP offers standards, REST provides simplicity. REST is oriented towards resources rather than operations. Developers use the architectural style to transport data from one location to another. If users want to see a list of purchases, they need access to an object; the operation is secondary. Then, you need a simple way of fetching this information without over-specifying the process.

The Interface of SOAP API vs REST

A common opinion among developers is that SOAP’s interface is a lot more difficult than REST’s. Technically, it’s true – we’ve already seen that there’s a strict typing system in place and a lot of additional specifications.

However, the mere fact of having WSDL files that describe web-services doesn’t make development more challenging. There are many automated tools that generate SOAP WSDLs automatically. 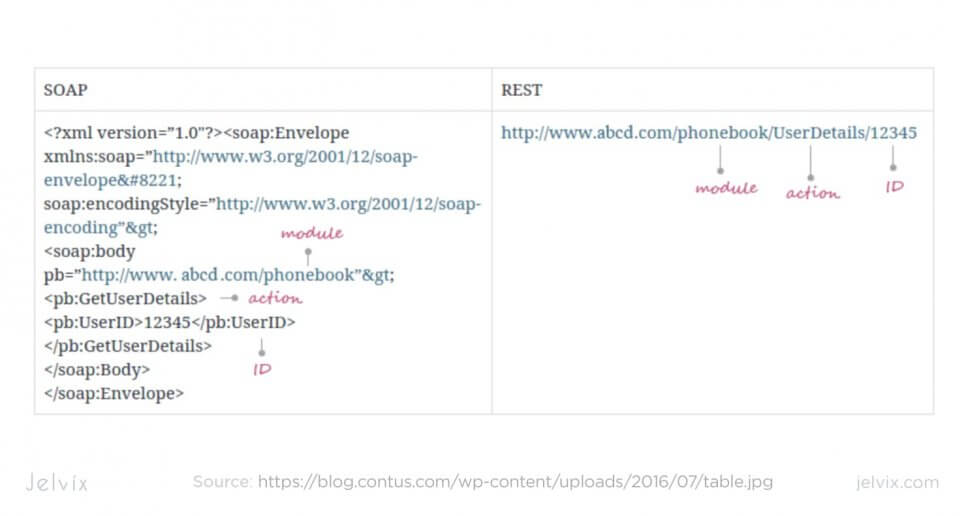 Another advantage of SOAP is its automated error-handling. SOAP checks requests by default and offers standard procedures for code monitoring. REST doesn’t have a similar system – errors can run undetected for years.

Overall, REST is more flexible and can be adapted to more operations. It’s better suited to small transfers (there’s no need to deal with SOAP complexities for an insignificant operation). However, the difficulty of handling SOAP can be mediated with development tools.

We have already talked about this a lot, so it makes sense to summarize the most important difference between SOAP and REST web services and their performance.

So, SOAP is safer and more reliable, but it’s slower and heavier. REST, on the other hand, is flexible and high-performing, but it’s a lot less predictable and not as controlled.

From the main technical characteristics of SOAP and REST, it’s easy to conclude that SOAP is a lot less versatile. You can only use XML for writing protocols since there’s a conservative type system in place, and the structure of associated files is well-regimented. Even the smallest operations need to follow these strict rules – which is why using SOAP for these purposes is inefficient.

REST, on the other hand, doesn’t require developers to use strictly XML. You don’t have to generate additional files or modify the underlying codebase to make XML fit. You can choose the format of expression based on your codebase. This is why REST is generally more used than SOAP. The latter is preferred only for highly controlled operations. 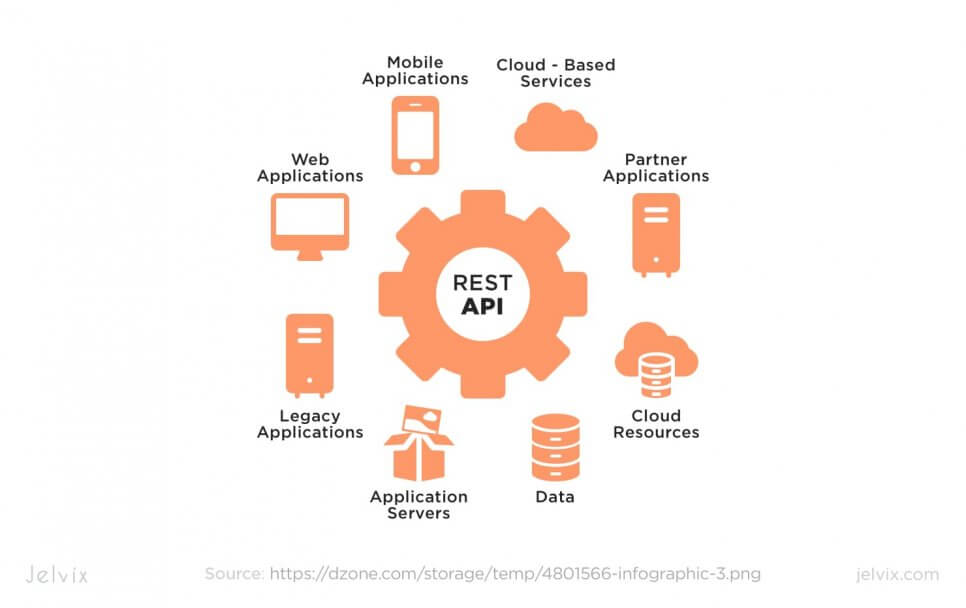 Use Cases of SOAP and REST Services

To give you a practical idea of what REST API and SOAP API are, let’s take a look at the situations where these tools perform best.

Use cases for REST are tasks where developers need to benefit from the main REST’s advantages – flexibility, speed, and high performance. Here are some REST vs SOAP examples.

So, REST is used in situations where running multiple operations is more important than having a single big one. IT’s a go-to solution for performing stateless requests. Also, REST is simple, which is another important reason for RESTful API’s popularity.

Find out more in our article about Top 10 Picks for Real Estate APIs in 2023 and the advantages of implementing them in your business workflow.

We have already discussed how a lot of SOAP issues can be solved by using assisting software. You don’t need to generate envelopes and additional files manually – there are tools that will write them for you. Hence, you can solve the issue of SOAP’s complexity while still benefiting from advantages. Here are some use cases where SOAP is quite indispensable.

SOAP is a more controlled option, which is why it’s a go-to option for financial transactions. Developers can predict how much information SOAP needs and how the end service will function. The internal logic is described in additional files in detail. 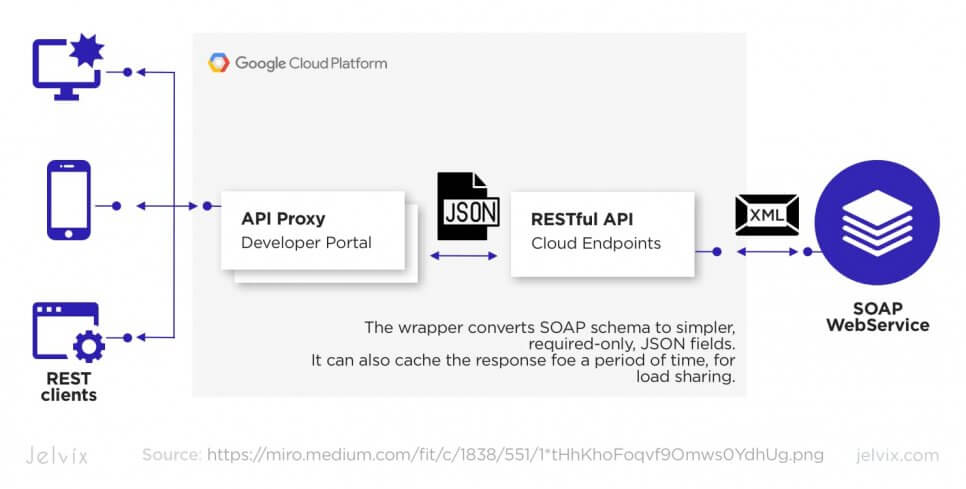 SOAP and REST aren’t competing with each other. Both approaches have different goals and architectural methods for achieving them. SOAP is a strict protocol that offers a defined logic for performing operations. REST is an architectural approach that cares about compliance with general conditions – and not so much about precise means.

When you choose between SOAP and REST, analyze performance, connection availability, required outputs, statelessness, and statefulness of requests. To implement REST and SOAP APIs into your project, contact our web developers. We will analyze your functional and non-functional requirements, infrastructure, and internal logic and execute the right solution.

Extend your development capacity with the dedicated team of professionals.

GraphQL vs REST: Which is the Best for API Development

SDK vs. API: What’s the Difference?

GraphQL vs REST: Which is the Best for API Development