Development frameworks are used to organize the development progress. Developers get the ready structure for their code base, can apply reusable elements, and increase product speed. Using web frameworks for the front end is common – developers use frameworks to work with JavaScript.

Using frameworks for backend is slightly less common, but it is just as helpful. When we work on web development projects, we apply frameworks to a client- and server-side alike – because it’s highly efficient and convenient. 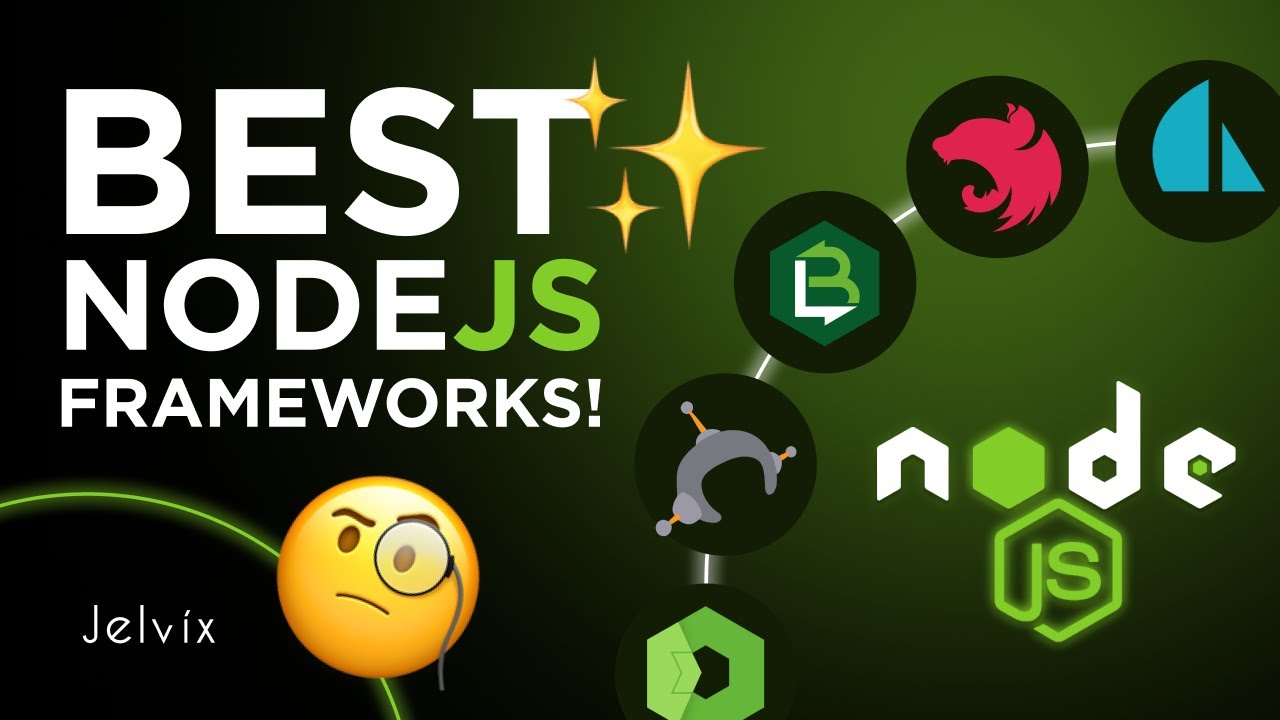 How to choose the best Node.js framework?

When we choose the best Node JS framework for our projects, we always pay attention to determining factors. Normally, it takes experience to select the fitting Node.js framework for a particular task, but there are some rules that work well for all products. 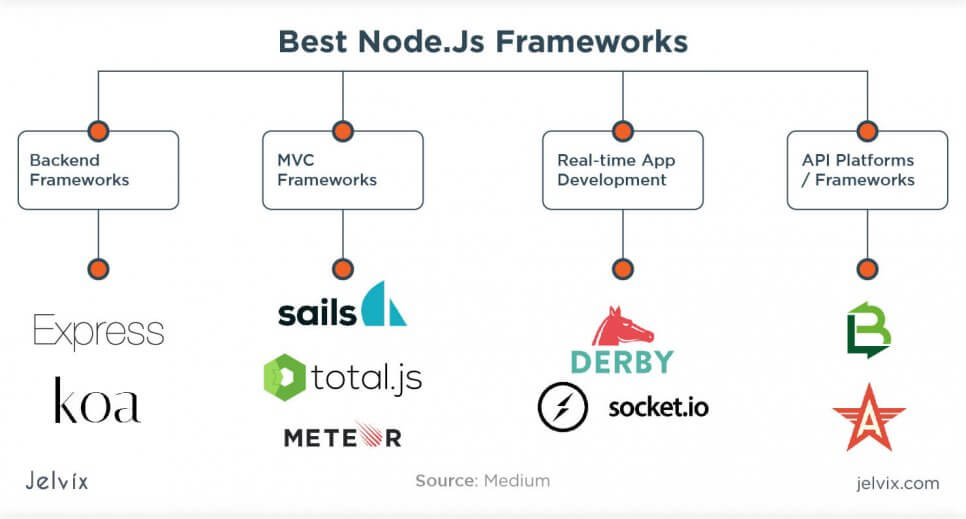 Node.js web frameworks provide a defined structure for a codebase. In the long run, they decide what characteristics your product will have, how the app will process the data, and handle computing. You want a framework that isn’t too opinionated – it shouldn’t limit you in possible ways of executing the project. If the framework boxes you one method, it definitely is not good enough.

On the other hand, you want to be able to use packages, Node.js libraries, and reusable code frameworks. This is where the ecosystem comes in. You want a framework with an actively contributing community, educational materials, and the one used across many industries.

If you define quality standards for your Node JS frameworks selection early on, you’ll have an easier time narrowing down the options. The list of optimal functionality is certainly subjective for each development project – still, we have selected our favorites to give you an idea of the big picture.

We will review the best Nodejs frameworks, describing their respective advantages and use cases. To make this list, we have analyzed statistics, functionality, use cases, and advantages.

Express.js is the most popular framework for Node.js. It allows reusing code to process data in web applications, storing user sessions, managing cookie files, and handling the payload. Without a framework, Node.js requires you to rewrite a lot of repetitive processes from scratch.

Express combines Node.js API  frameworks with browser-specific APIs that aren’t normally supported by the runtime environment. You can connect the backend code to the browser and store certain files directly in the browser. This is why Express is a top choice for dynamic content. It quickly responds to users’ requests, uploads text, images, videos, and other content on the page.

Companies that use Express.js

Meteor.js has a reputation for being a go-to Node.js framework for fast development. Its packages and libraries have a lot of reusable components. You will be presented with a very clear structure that will allow you to get your project off the ground in several weeks.

The framework can be integrated with Cordova, which means developers are able to build native mobile apps while reusing Meteor’s code. That said, Meteor is hardly the best option for complex long-term projects; the ecosystem of the framework has the reputation of being a ghost town – the framework has been getting increasingly less popular over the years. Still, it’s a good choice for time- and cost-efficient solutions.

Companies that use Meteor.js

Koa is one of the simplest Node.js frameworks out there. It’s elegant and lightweight. On top of that, the installer file doesn’t feature a built-in templating tool or router. Many Express plugins and libraries have been adapted to Koa. It’s similar to Express, only simpler and slightly less universal.

Koa is not hugely popular among enterprises, and it’s considered a startup solution that offers a lightweight approach to web development. The framework mainly gained traction when Express wasn’t updated for some time, but now, after Express’ team resumed active support, the framework is losing its initial traction.

Companies that use Koa

Sails.js is a popular framework for small projects. Similarly to Meteor, it doesn’t have the most active community which was probably affected by the absence of any recent updates. However, that aside, Sails is an elegant framework that integrates well with JS frameworks and databases.

Its model-view-controller is similar to what Ruby on Rails offers but supports more data requests. It’s a popular choice for real-time services and data-based applications. The framework is famous for its ability to generate REST JSON automatically and default HTTP support.

Nest.js is a framework that uses JavaScript, TypeScript, Functional Programming, Object-Oriented Programming, and Reactive Programming. It can be integrated with other Node.js frameworks, notably Express.

Node.js’ architecture is hugely inspired by Angular – to the point where both teams participate in the events together. The logic behind code providers, controllers, pipes, interceptors is similar to Angular’s structural solutions. Developers that worked with Angular before will find Nest easy to master. 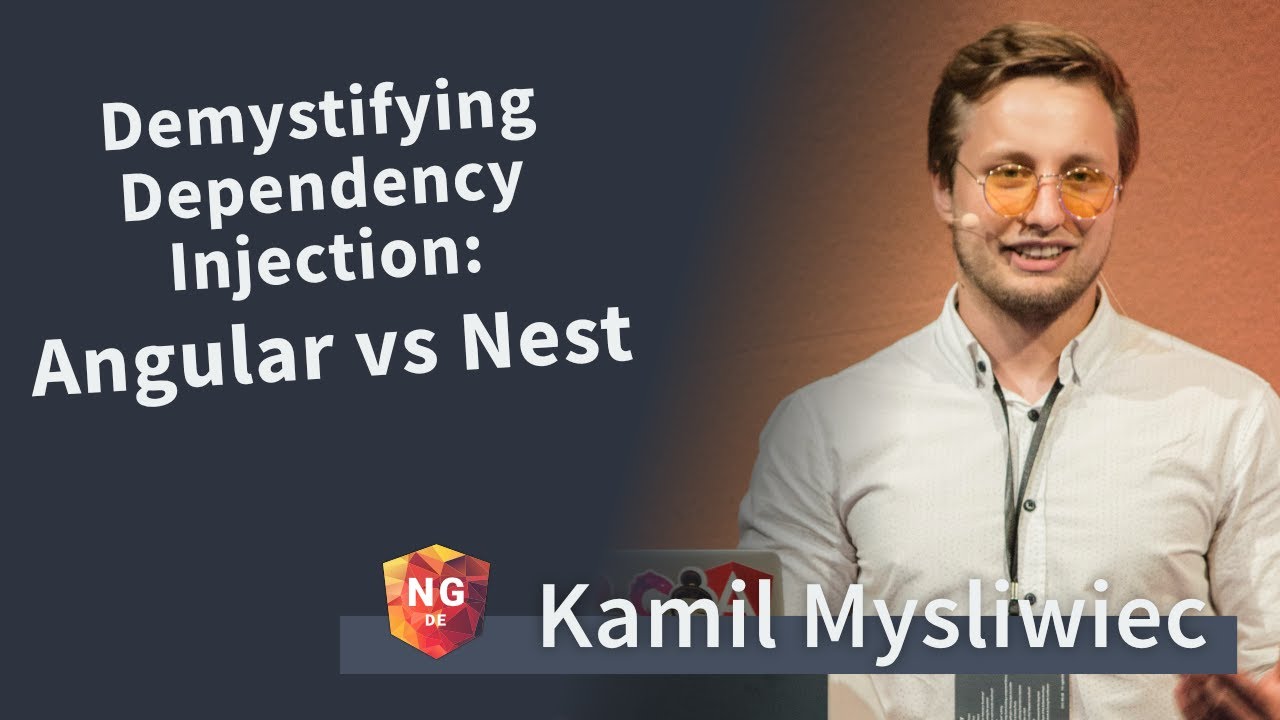 Companies that use Nest.js

The application supports the SQL and NoSQL databases, allowing conversion of web applications to mobile apps, running the software locally, or in the Cloud, and changing the settings of push-notifications.

Hapi.js has the reputation of being a safety-focused Node.js framework, and we can confirm that it is the case indeed. The team clearly prioritized code quality control and verification over extensive functionality, but ultimately, came up with a great mix.

All security updates in Hapi’s development have a clearly defined immutable ownership. If something goes wrong, developers know whom to hold accountable. Hapi also offers a collection of plugins, although not as many as in Express or Nest.

Companies that use Hapi

Adonis.js is a relatively new Node.js framework for microservices development. The tool itself consists of multiple packages that run the server-side of the application. The framework provides quite a lot of abstraction over Node.js – you won’t be working with typical runtime’s syntax.

The framework was hugely inspired by Laravel, so developers who worked with this PHP framework will perhaps have the easiest time transferring to Adonis.js.

Companies that use Adonis:

Keystone consists of a range of modules, supporting core functionality for backend, UI tools, web protocols, and Mongoose 4  – a database for object modeling in Node.js.

Total.js started as a Node.js framework for real-time applications. REST servers, e-commerce platforms, and Internet of Things projects, but now turned into an entire platform. The platform now combines the functionality of the platform and library, providing, on the one hand, established structure for a web project, and on the other, reusable functionality codebases for different types of projects.

Even though Node.js frameworks technically aren’t essential for backend development, they make a huge difference in development efficiency, product performance, and code quality.

Having access to predefined templates, libraries, and middleware allows developers to save time on writing repetitive code, getting through thousands of callbacks, and struggling to integrate Node.js with front-end frameworks.

We can’t say for sure which one is the best Node js framework 2020, although we do have our favorites. Still, when a Node.js project comes along, we always base our choice on the product’s needs and characteristics.

Some frameworks are better equipped to handle dynamic content, while others fit best for MVP development.

A professional team is able to pinpoint the key product characteristics and take them into account while choosing a framework. You are always welcome to talk to our team to get a third opinion on the project’s tech stack.

Leverage the top skills and resources to scale your team capacity.

Why Do Data-Driven Businesses Need a Data Governance Framework?