What Are the 7 Layers of IoT Architecture?

IoT is a very popular term these days. It stands for the Internet of Things. According to Oracle, the IoT is an umbrella term. It gathers all smart devices used by people and businesses. In most cases, the devices have sensors and microchips. Also, they are connected to other devices or the Internet. For example, smart gas leak sensors, a wireless doorbell camera, or robotic vacuum cleaners are the components of IoT.

The market has exploded recently, and it’s not going to slow down the pace of development. According to ResearchGate, more than 75 billion IoT devices will be connected to the Internet by 2025. 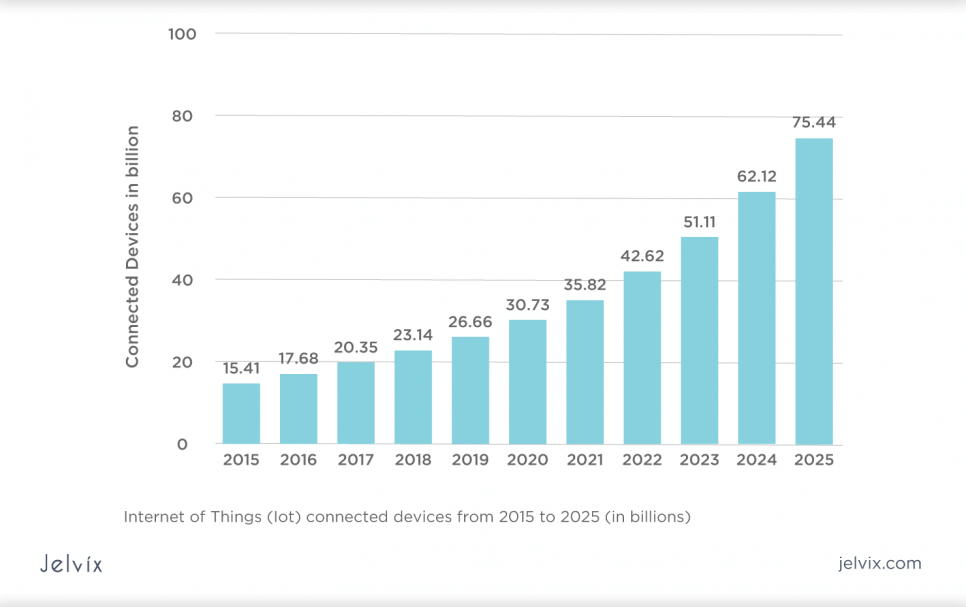 All devices connected to the Internet need a unique IP address. But, the massive adoption of IoT components forced a shortage o IPv4 addresses. Consequently, the IPv6 protocol has become massively used recently.

What Is IoT Architecture?

IoT devices are not helpful when they are utilized separately. Smart sensors connected to the Internet bring an advantage to businesses. A well-developed architecture of IoT devices foresees the ability to create automated systems. They help run large mechanisms hassle-free. What are the stages of IoT architecture? In a nutshell, an IoT architecture comprises four crucial stages. They are the following: 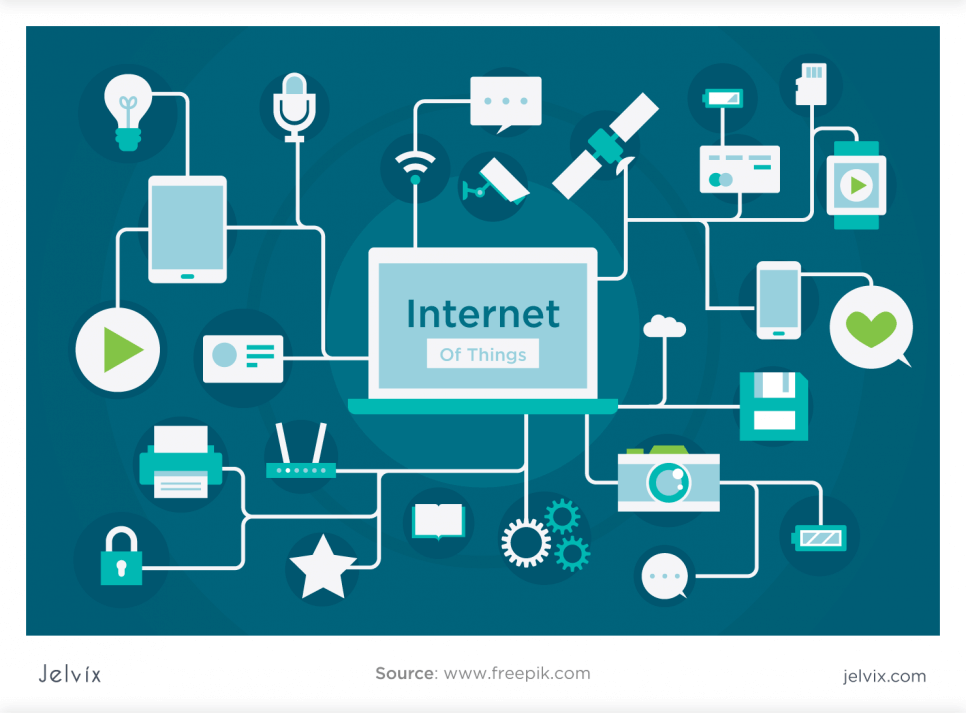 IoT devices have to be integrated into a complicated system to gather data, analyze it, and send commands. Such a system implies a lot of IoT architecture layers. Do you want to discover what the Internet of Things architecture layers are in more detail?

If so, you’re at the right place. Below, you will be able to dive deeper into the architecture of IoT. 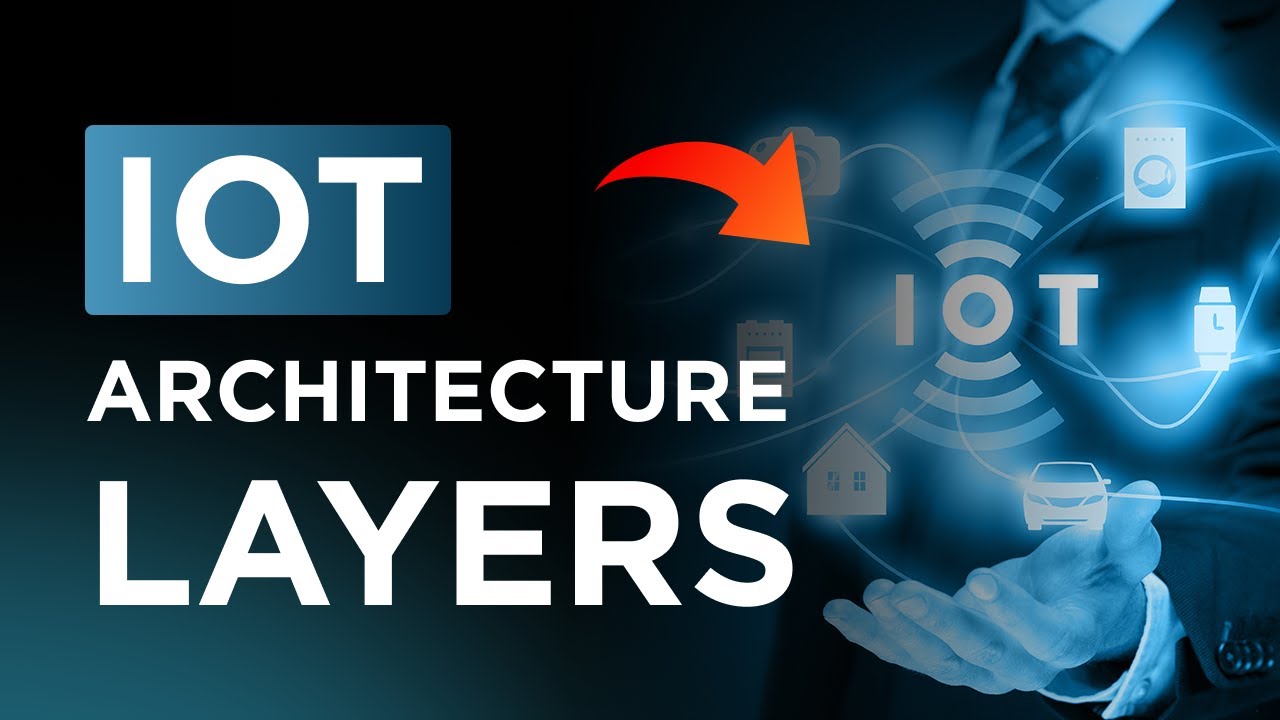 There is one thing you have to remember about the IoT architecture before taking a deeper dive into the topic. Note, there is no one-size-fits-all solution that works for all projects. The complexity of an IoT ecosystem used by a business depends on the tasks connected devices need to tackle. Therefore, it’s vital to know about all the IoT architecture layers to create a system that meets all the requirements.

Nevertheless, even though almost every IoT system deployment is unique, its architecture is limited by particular layers. Keep reading the post to learn more about the Internet of Things architecture layers that can be used.

The basic IoT layered architecture was widely used at the dawn of IoT technology development. The three-layered architecture can still be utilized because it is easy to implement. However, it has a lot of drawbacks. Many security threats are the most important reason why this architecture is almost not used these days. 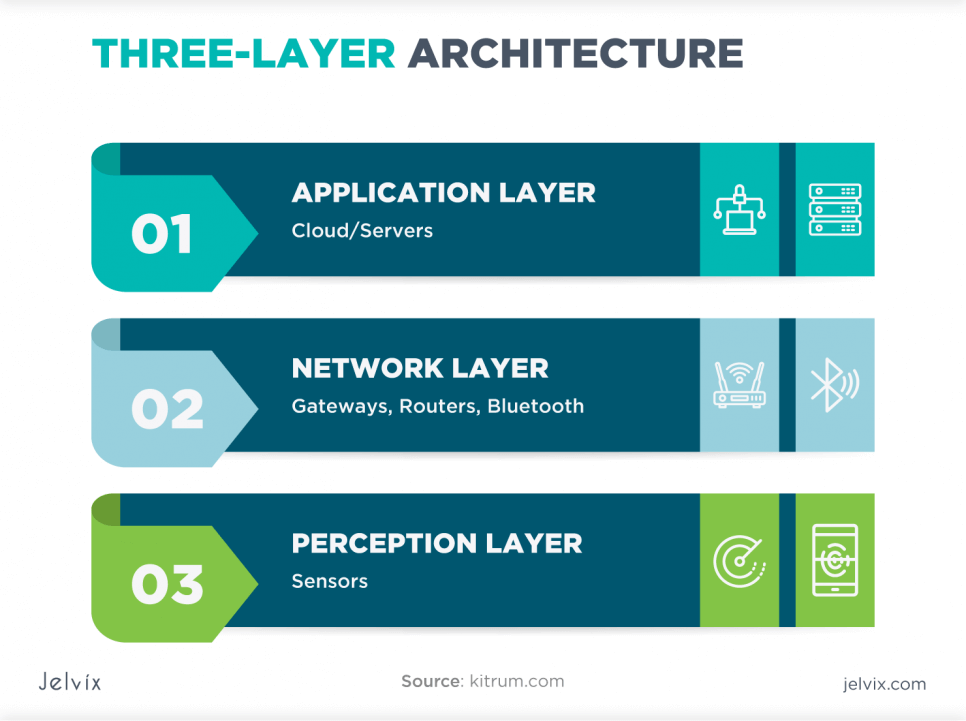 It is the foremost layer that is also known as the sensor layer. It implies all types of sensors that can be used in IoT devices. They gauge particular parameters. Then, they transform signals from the environment sensors interact with them into digital information. Sensors can help create smart premises maintenance systems. The most popular ones that represent the first IoT architecture layer are temperature, pressure, and infrared sensors.

The Perception layer implies devices that collect information and receive commands from users. It is one of the most sensitive IoT architecture layers. As a result, scammers conduct a lot of different attacks to get control over them and access the data they gather. Down below, you will find the most popular threats of this layer.

It is known as a gateway layer that helps establish the logical design of IoT by connecting devices with a platform. The data captured by sensors get transmitted by wires or radio to back-end IoT services. The transferred data is secured to prevent unauthorized access. In most cases, the transmitted information is encrypted. The most popular IoT communication models are the following: 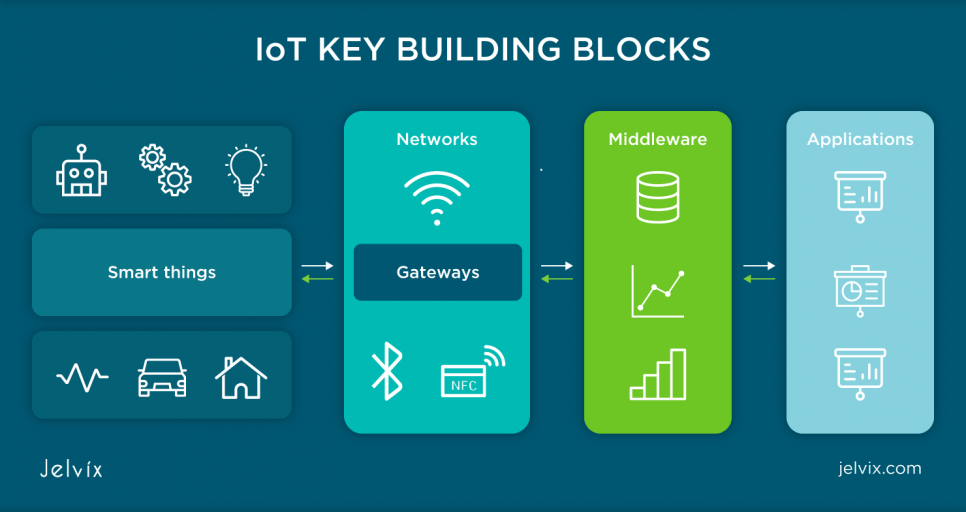 When all devices are networked, a messaging protocol has to be configured. According to IBM, messaging protocols are rules that different devices and computers follow to understand the information and commands they exchange. The most popular protocols used in the second layer of the three layers of IoT architecture are the following:

The network layers are the most important in the Internet of Things architecture because it connects users with devices. So, many hackers attack this layer. They strive to get unauthorized access to IoT systems and manipulate them without permission. Here are the three most popular types of attacks.

What is the application layer in IoT architecture? It is the final layer in this IoT reference model. It represents all devices that use the IoT devices or systems deployed. It can be smart devices that help keep your houses clean and safe or entire smart-home systems that can be managed with the help of a smartphone. At the application layer, end-users interact with all the connected devices.

The layer has a lot of different issues that need to be resolved. However, security concerns are the most important ones. There are many different ways to attack devices in this layer to get unauthorized access. The most popular ones are the following: 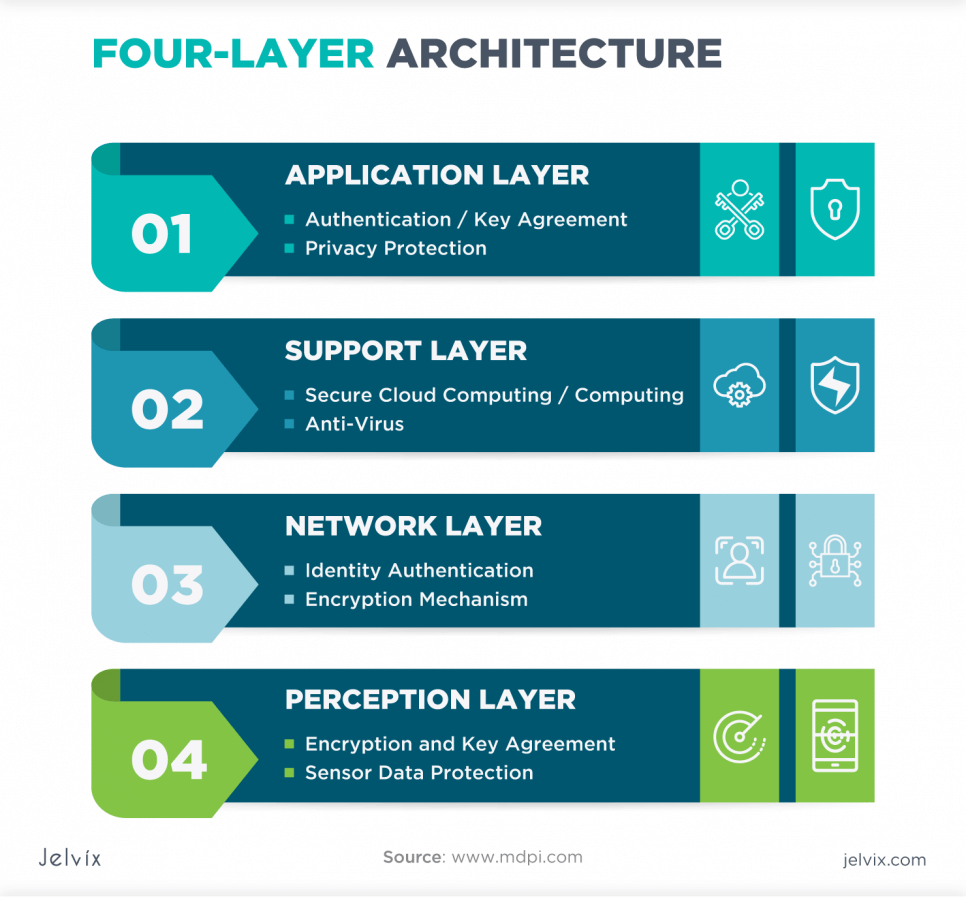 There are a lot of threats that the three-layer logical design of IoT experienced. Therefore, it was offered to add another level that could resolve most issues. It’s also known as Secure because it focuses on making IoT communication models more protected from possible threats.

The support layer verifies if the information is sent from an authenticated user. In most cases, passwords or shared keys are used as authentication methods. After verifying a user, the Support layer sends information obtained from sensors of IoT devices to the Network layer. It is third in this IoT layered architecture.

The Support layer helps enhance security. However, it doesn’t protect all IoT architecture layers from all other threats. Since these attacks are very hard to conduct, the Support layer significantly enhances the security of an IoT reference model. The two most common threats are the following:

The model that implies four IoT architecture layers was a good solution. It helped enhance the security of the logical design of IoT. However, it wasn’t ideal. The architecture didn’t meet all the demands of users. Also, there were some security concerns. Therefore, the five-layer architecture has been developed.

But, this architecture isn’t an enhanced version of the four-layer iteration. Instead, this one consists of the basic architecture that implies two extra Internet of Things architecture layers. The two new layers are Processing and Business. 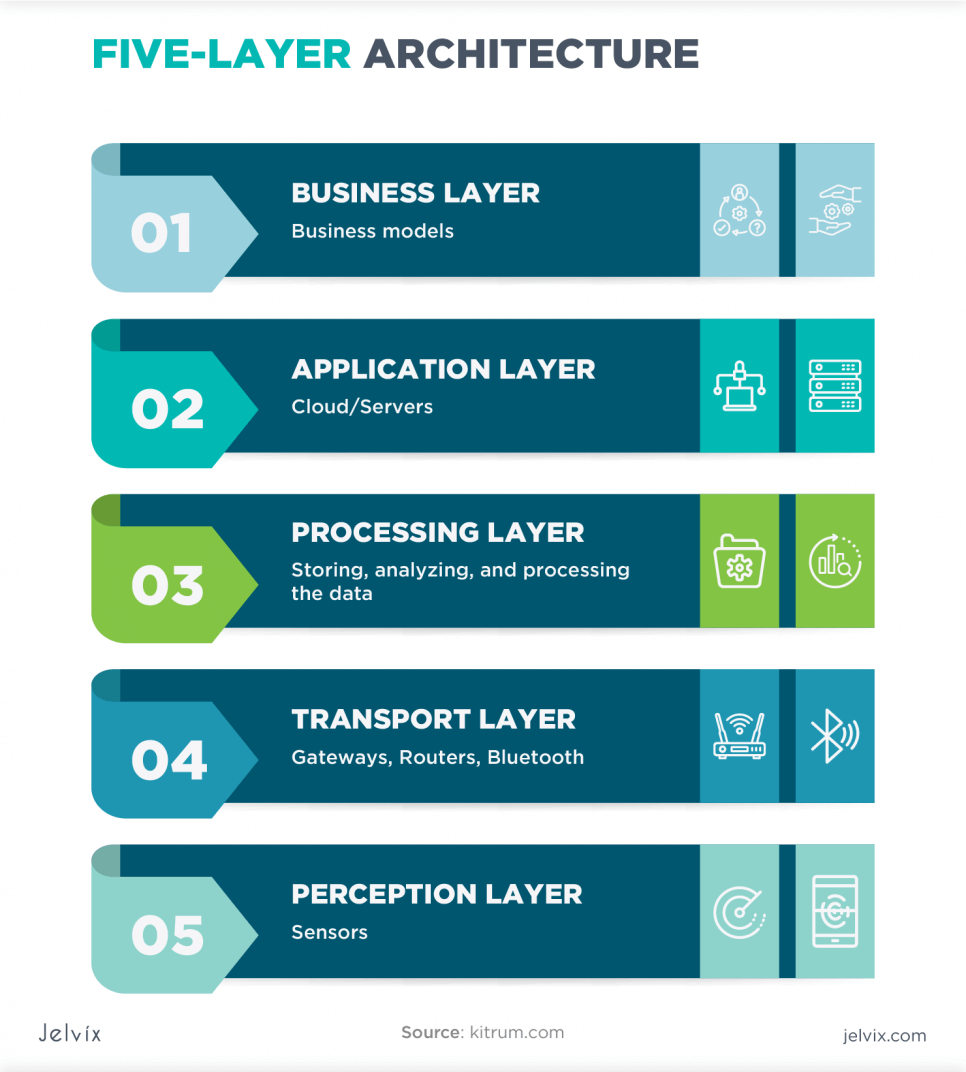 It is a layer that gathers all the data provided by the perception layers through a network. All the information is stored and analyzed. It is one of the most important layers of IoT because it makes decisions based on data analysis. Also, the application layer interacts with a user to manage and operate their IoT devices. This layer is placed between Network and Application layers in the logical design of IoT architecture.

There are two major data processing stages of this layer.

By adding a new layer that stores the gathered data securely, developers increased the security of the basic architecture of the  Internet of Things. However, it doesn’t bring 100% security to a system. The most popular threats are the following:

All IoT communication models strive to deliver convenience in information consumption to end-users. It is the top layer that is located above the Application layer. The Business layer ensures that users can use IoT systems hassle-free. For example, it takes raw data and forms insights in graphs and charts. This layer is related to decision-making because it interacts with stakeholders.

This layer is considered secure. Therefore, there are no serious threats to this IoT layered architecture. The only one that users should be aware of is the logic attack. It needs hackers to find any flaws in code conducted by developers and use them to get unauthorized access to important data. Also, there is always a chance that this layer may have zero-day vulnerability.

An additional layer may enhance the architecture that implies five IoT architecture layers. The demand in this layer has appeared because the amount of data processed by IoT devices has increased significantly. Moreover, it helps build a large-scale IoT reference model. The layer is placed between the Network and Processing layers.

This layer uses the Fog computing model, which enhances large-scale IoT systems. It erases the need for all devices in a network to access the main server to make computations. Instead, most computations are made on devices locally. Also, it helps decrease the data storage and transferring because most information is stored locally on devices.

Additional layers increase security compared to the basic IoT reference architecture. Nevertheless, there are a lot of different threats that IoT devices and systems experience. Therefore, additional layers have been developed to protect sensitive data and IoT deployments.

The Security layer is considered the seventh. Thus, now you know the answer to the question, “What are the seven layers of IoT?” It helps protect other layers of IoT by keeping devices, clouds, and connections safe from intruders.

The IoT market develops at a high pace these days. The number of smart devices connected to the Internet grows exponentially year by year. Since most people use IoT devices constantly and share large amounts of sensitive data, the IoT architecture has added four additional layers.

There were only three vital IoT architecture layers when the technology was developed. However, some systems use from five to seven Internet of Things architecture layers these days. Thanks to Jelvix’s extensive expertise in IoT, our specialists can build a system of any complexity.

Feel free to contact us if you want to create a forward-looking IoT solution that will help you reduce spending, automate processes, and enhance supply chains.

Leverage the top skills and resources to scale your team capacity.

Internet vs Intranet vs Extranet: The Difference Explained

Edge Computing Definition and Use Cases

Monolith vs. Microservices: Why Companies Switch Back and Forth