Did you know that most of the programming languages extensively used in the computing world are object-oriented? With their help, programmers create a lot of computer programs and a significant part of web content. Therefore, explaining how object-oriented languages (OOLs) ​​work is important for anyone who deals with the field of computing. 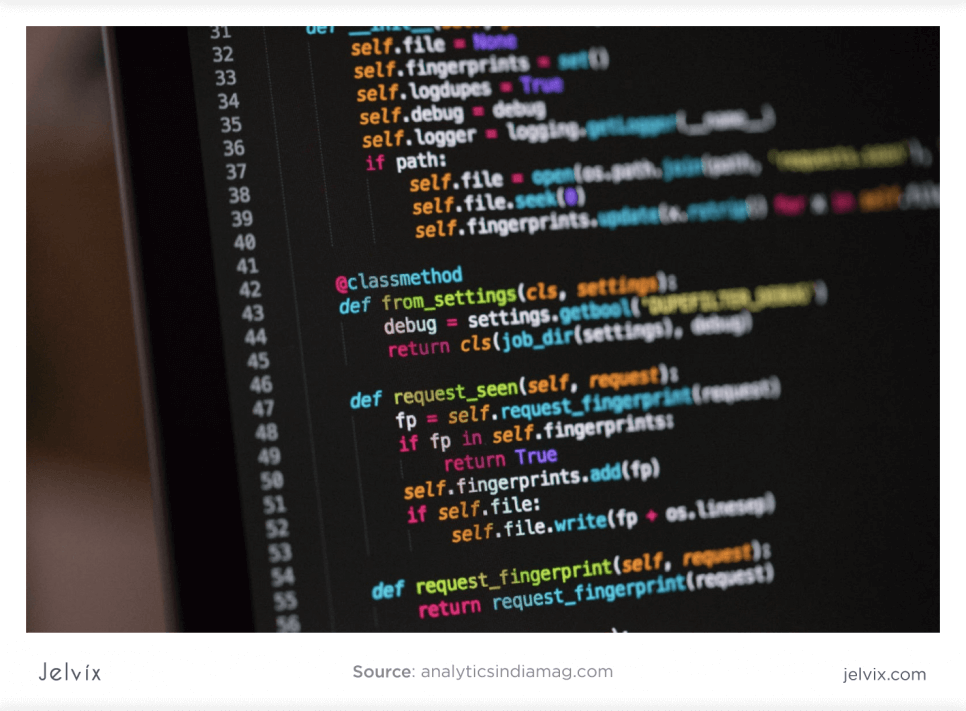 Programming language is a tool for writing computer programs that tell a computer how to operate various objects, perform specific computational processes, etc. Each language has its syntax; after learning it, you can program the computer’s tasks.

Machine languages ​​are instructions in machine code, understood well by a computer but difficult for humans to read. Programmers prefer to read and write higher-level programs.

High-level procedural languages ​​(e.g., Fortran, Pascal, C). When writing functions and procedures for modularity of code with these languages, programmers can divide the process into different activities. High-level languages ​​work through a compiler or interpreter to receive instructions for the machine code.

Object-oriented languages ​​(Ruby, Java, C++). OOL’s are high-level languages that are more human-readable but require translation by a compiler or interpreter for machines. They go further and combine their data and procedures into units named objects, which comprise more than just functions (actions represented by verbs). 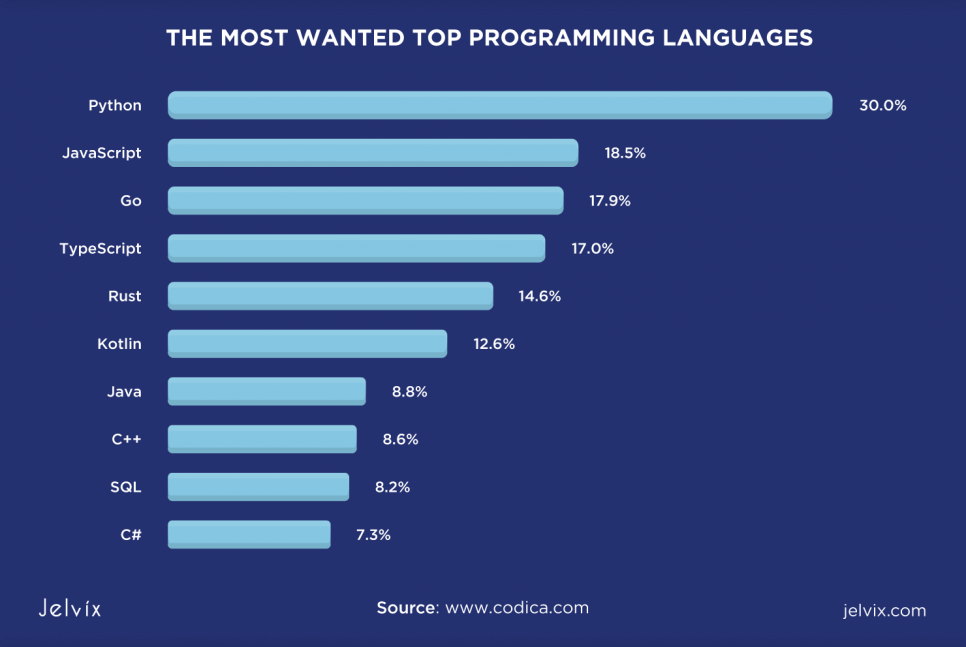 What is a Programming Paradigm?

The further we move away from the machine code, the more specialized and abstract data processing becomes. That is why so many programming languages ​​have emerged. We categorize languages ​​by programming paradigm — the style to work at and access the data.

A programming paradigm is a set of principles and techniques for creating the code. We need them to streamline the program and make it structured, convenient, and understandable for other people working with the same paradigm. 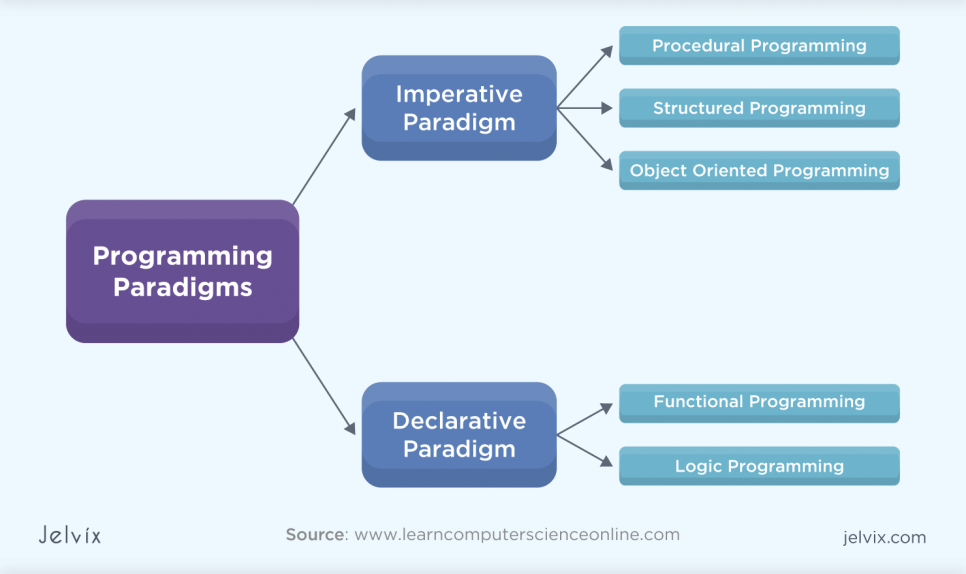 What is Object-Oriented Programming (OOP)?

The most prevailing paradigm at the moment is Object-Oriented Programming. This is a subtype of imperative programming based on sequential calls of data-modifying commands that the program works with. Thus, it operates on objects, and this is convenient for many applications.

The second most widespread paradigm is functional programming (FP). It reflects the idea of ​​declarative programming when a program is a tool that solves a specific problem. FP is based on the description of processes (functions), not objects.

These are user-defined data types. With classes, you can create a schema of the structure of methods and attributes based on individual objects being instantiated.

These are instances of classes designed with specific data. In most OOP languages, almost everything is a unique object with values and executable code. Although it may be a copy of another object, its variables will be different. And OOP software applications are collections of objects that can interact with each other.

They represent behavior and perform actions — restore information about an object or update the object data. Methods promote reuse and keep the functionality included in the object. When individual objects are instantiated, the methods described in the class are called these objects.

This is information that is stored in a class template. When objects are created, the unique objects include the data stored in the Attributes field. The state of an object is determined by the data in the object’s attribute fields.

What are the 4 Basics of OOP?

Object-oriented languages ​​are based on four principles, and these are the general properties that define them and make them much more effective. So what makes a language object-oriented?

It is the concept of data binding to functions that work to keep that data secure. For instance, many OOP languages ​​prohibit anything other than specific class methods that own the data to access it.

We can view abstraction as an extension of encapsulation, and its purpose is to reveal only those information objects necessary to interact with it and hide everything else. Using this principle reduces complexity and makes it easier for programmers to make changes.

If you do something too often, it should become a separate entity. For example, if you frequently rewrite the same function for various objects, it can be abstracted.

Programmers use inheritance when working with several objects with a lot in common but still having unique logic. This principle allows programmers to reuse common logic by removing particular logic into another class to maintain an irregular hierarchy for better accuracy.

Polymorphism distinguishes object-oriented languages from procedural languages (C, Fortran, Basic, Pascal). That means “taking over one form.” It allows the same method to perform a different behavior in two ways.

Compile-time polymorphism applies method overloading. Functions or methods can have the same name, but different parameters pass when the method is called. Programmers may get different results depending on the number of parameters given.

Runtime polymorphism enforces a method override in which a child class can implement differently than its parent class. 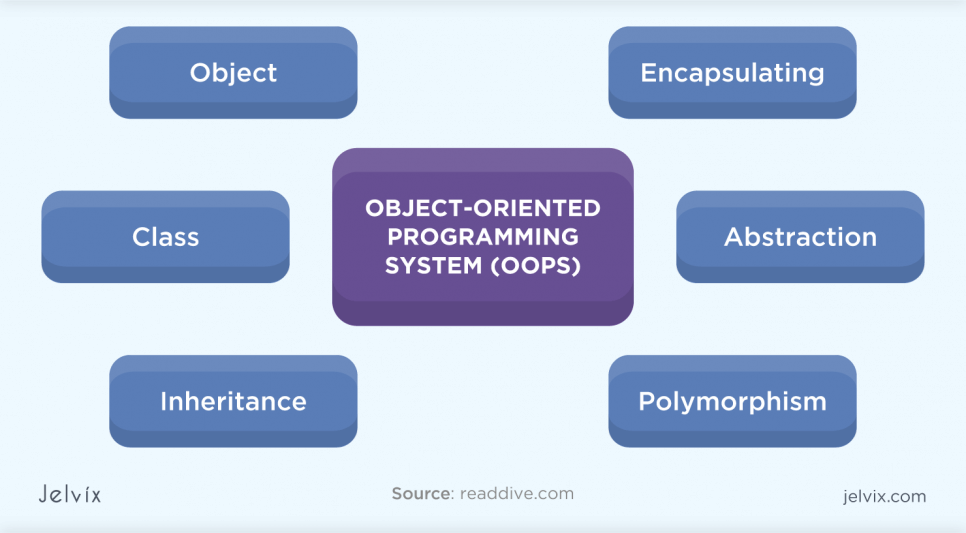 Some limitations of OOP 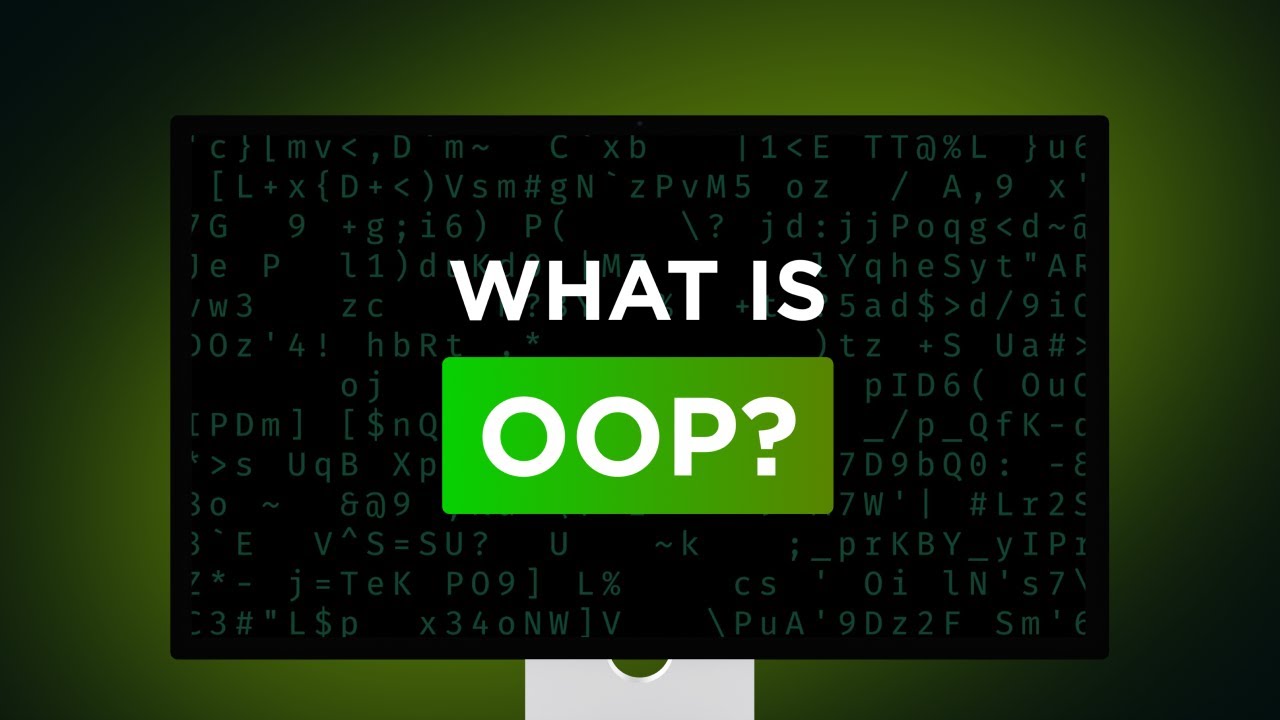 OOP can be an excellent investment in future projects. By considering the pros and cons, you can compare the initial value with future earnings to determine if this is the right approach.

In OOPL, modularity breaks an app down into objects and classes. That is great because the app gets a modular structure, and the modular code is simpler to read and maintain. That is why object-oriented programming affords higher productivity in software development compared to traditional procedure-based methods.

Because of polymorphism and abstraction, we can use one created function repeatedly. That reduces complexity, saves time and space, and simplifies programming. You can also copy information and tasks that have already been written using inheritance.

The bottom line is that parts of a program are developed separately and function by object-oriented principles, which simplifies large development teams’ work.

This code is easy to maintain because most of it, if not all, sits in one place and is called and reused. In addition, one modular and polymorphic function is easier to fix than a hundred different cases of function calls separately.

While most languages ​​have some vulnerabilities, the security of OOL ​​is built-in with encapsulation. Other methods cannot access personal data by default, so programs written in OOP languages ​​are more protected.

Because object-oriented languages ​​are so scalable and customizable, it can sometimes make it hard to comprehend how the code works. And the OOP code itself can work in different ways. There are many programming methodologies in OOP that do not work with other methods, are inefficient, or are difficult to use.

Because these languages ​​are scalable and modular, giving up on a clear design will fail. Creating an effective program requires coherent planning more than using other programming paradigms.

This one is both an advantage and a disadvantage. Objects and functions can work independently, and they receive information and return valid results. But sometimes, what they do is not always obvious. While the programmer has created this object and knows it, OOP languages ​​are not as transparent as other languages.

OOLs often suffer from performance degradation. Because the programs are larger, they require more computing resources to run. But this is not always critical. The diversity in speed only becomes apparent when processing tremendous or complicated computations or when extreme speed is required.

As mentioned above, to be fully object-oriented, a language must support seven qualities:

The first OOPL is considered Simula – a simulation tool developed in 1960. But the archetypal object-oriented language we can call Smalltalk, set in the late 1970s. Further, the baton of this programming style was picked by C++, Java, and C#.

We can roughly divide current OO languages into categories from which they borrow the most concepts:

OOP is easiest in Python, harder in C++. But if Python is also suitable for functional programming, in Java and C #, it is always necessary to create classes; functions alone are not enough.

Python is a general-purpose, interpreted programming language. Its philosophy is to enable programmers to write clean and valid code. Thus, there is a clear answer to the question, “Is Python object-oriented or not?” Since everything except a stream is an object in Python, we’ll call it object-oriented, anyway. 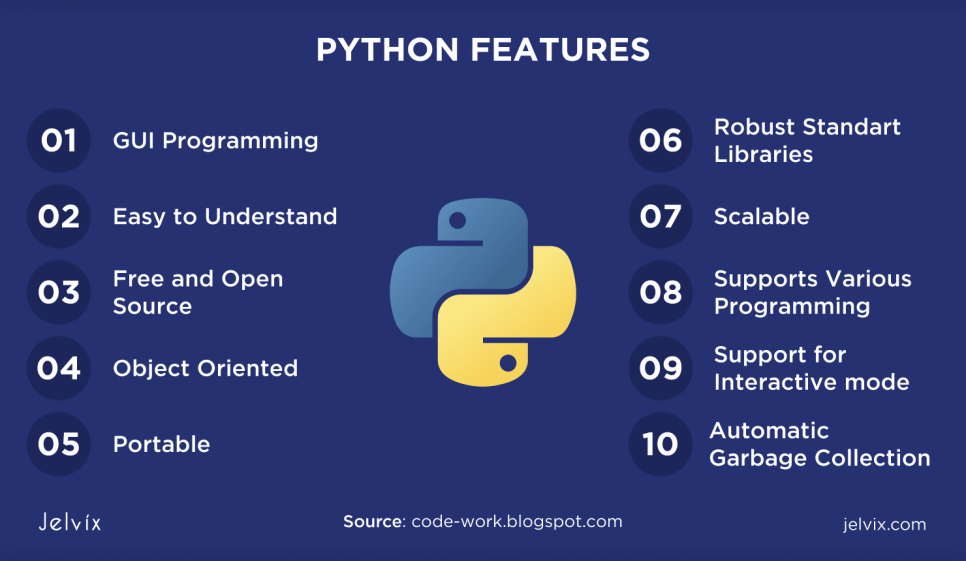 With Python, you can create:

We consider this language the best choice for machine learning and data analysis. And as the importance of ML and DS continues to grow, Python is becoming more popular. Google, Facebook, Netflix, and Spotify actively used Python as a language for their projects.

It is a high-level, interpreted programming language. Ruby can be dynamically typed and uses garbage collection. In addition, it presents full support for programming paradigms, including object-oriented, procedural, and functional. 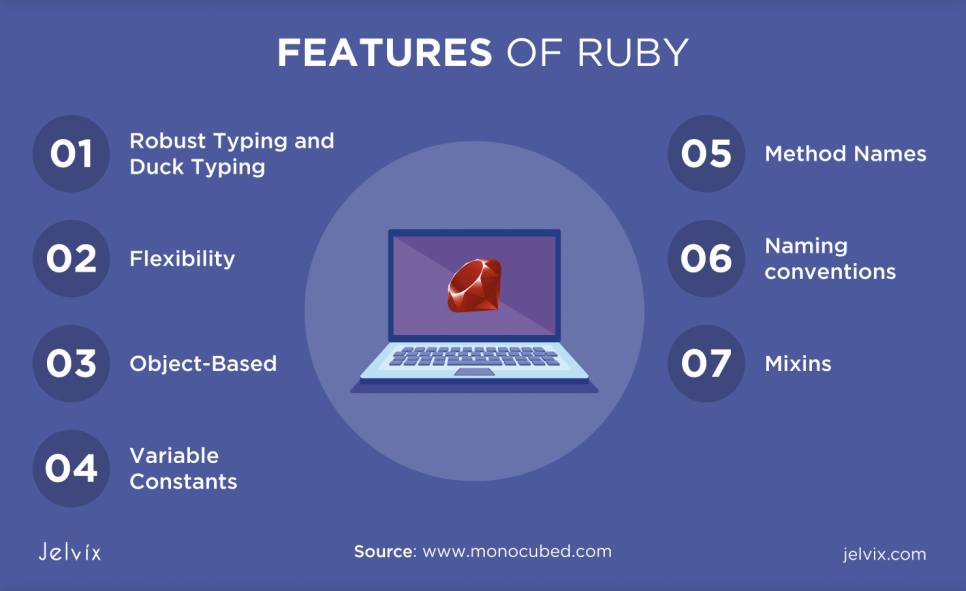 With Ruby, you can create:

The language is geared towards faster software development and is called “startup technology.” Famous companies like Airbnb, GitHub, and Basecamp use Ruby.

Go developed in 2007 as a collaborative effort by the Google team and other contributors. There is still debate about whether Go is an OOPL. We note that the Go programming language has nothing that resembles an object or a class, but it has some similar structures.

The language offers excellent concurrency and a super-fast compiler. Companies such as Uber, SoundCloud, and Twitch successfully use Go.

Undoubtedly, Java is one of the most extensively used OOP languages ​​in the market.

It is a general-purpose, class-based programming language explicitly designed to implement all dependencies. It allows Java programmers to write once and run anywhere, and that means that the compiled code runs on every platform that supports Java with no recompilation.

Java is not purely object-oriented because it does not support clauses about user-defined types as objects and the execution of methods represented on objects. This is the answer to the question “Is Java an object-oriented language?” 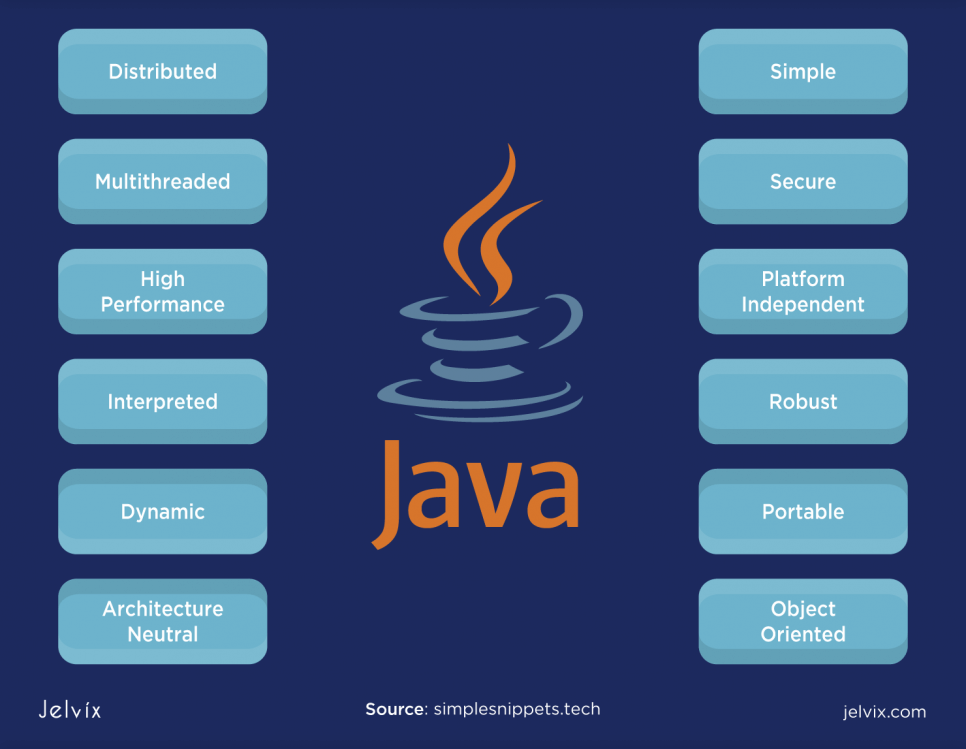 With Java, you can create:

Part of the reason for the widespread use of Java is that it is one of the official Android development languages. Airbnb, Spotify, LinkedIn, eBay use Java, like hundreds of other well-known companies.

It is a powerful general-purpose programming language that completely supports functional, procedural, and object-oriented programming techniques. Since C++ is a middle-level PL, we can use it as a low-level and high-level language. 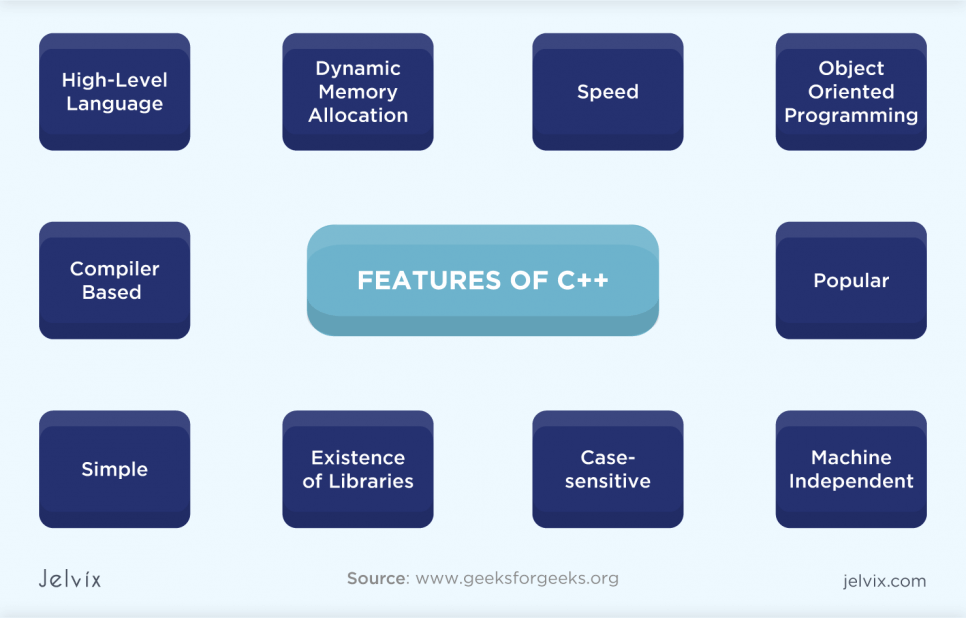 Object-oriented programming languages play a significant role in software development, and this is unlikely to change soon. Therefore, any of them will be an excellent choice to start your journey into the exciting programming world.

But if you want to order development in one of the OOP languages, write to us. At Jelvix, you can hire skilled developers and bring a competitive, innovative product to the market.

PHP vs Java: Differences and Similarities

Kotlin vs Java: the key differences you should know