Ever since the arrival of the Internet, it had been a matter of time before the era of the traditional television was over. The changing moment happened in 2014, with the introduction of Android TV: a version of the Android OS created for digital media players. Ever since then, the question of how to make an app for Android TV has been on the minds of the entire industry.

Currently, Sony, Philips, LG, and many others major electronics manufacturers are including integration with Android TV into their smart television sets. In truth, these companies don’t even have to bother: a plugged-in Android TV box can turn any television set into a smart one.

The wide availability of Android TV boxes combined with their low pricing makes the entire technology very promising, and the choice to build an Android TV app the right one. 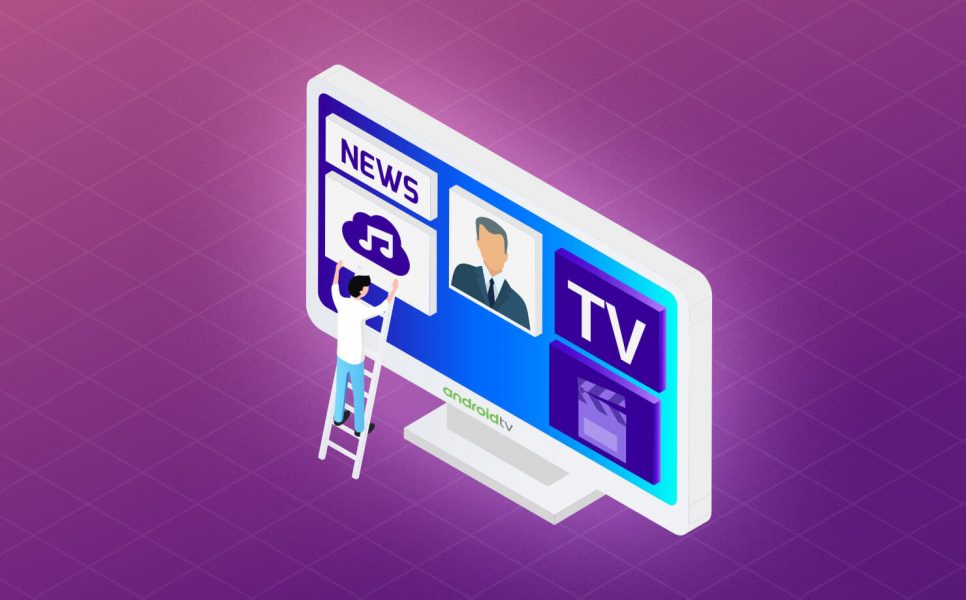 You might assume that, since Android TV is just another platform based on Android, the same apps that work on smartphones and tablets will run on it as well. This, however, is not true. TV apps are an entirely separate category on Google Play, and only those applications that correspond to a set of special technical characteristics will appear on the list.

Despite this, the market of apps already available for Android TV is pretty extensive. It includes but is not limited to four main application types:

This list, however, is far from complete. Many apps from completely different spheres of life are being adapted to Android TV. Weather forecasts, recipes, guitar tabs, and, of course, social networks – now people can access all of those on their large screens. This means you don’t need to compete with Netflix if you want to design for Android TV: you just need a good product from your niche.

How to develop apps for Android TV: requirements

Television is a very particular platform and there are plenty of requirements when it comes to the design and functioning of these applications. That’s why developing apps for Android TV specifically (as opposed to using the standard approaches to Android app development) is the only right approach.

Here are the main things to keep in mind during Android TV application development:

Your app requires a special design to run successfully on television devices. This means, first of all, landscape orientation and large elements of the interface (so that the user could easily navigate the app from the couch). Moreover, the navigation should work with the combination of a directional pad (D-pad) and a select button.

In case you already have an app and are interested in modifying it for Android TV, the same rules will be applicable. The design that works for smartphones or tablets will not work on a large screen with only your phone as the remote.

For anyone looking for Android TV app development tutorial to get a deeper understanding of the design requirements, here is a detailed technical guide created by Android themselves.

Apps designed for Android TV cannot rely on touchscreen navigation. In fact, in order for an app to appear on the list of TV applications on Google Play, functioning without a touchscreen is a requirement. Keep that in mind when starting to build an Android TV app. 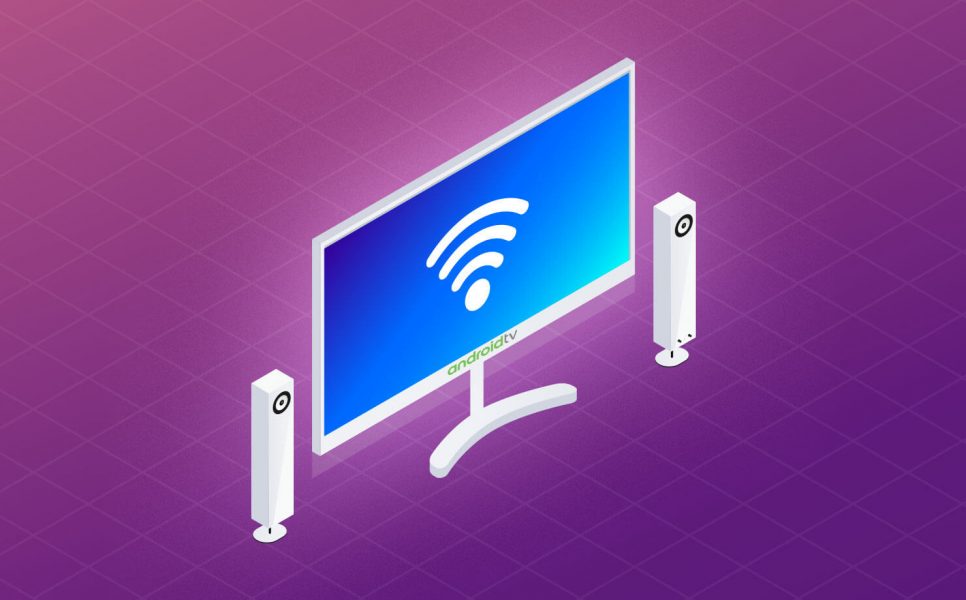 The latest models of Android TV boxes come with Google Assistant built in. This means you can turn it on and off, browse through content or change screen settings without getting up from the couch, using your voice alone. “Rewind five minutes”, “Play next episode” or even “Dim the lights” – all of these are commands that Android TV responds to.

Creating an app that can be navigated by voice commands would be a great step towards beating your competition.

User-friendly search is crucial for an Android TV application, so if your app is based on streaming services, this should be one of the things to focus on. Consider including voice search for best user experience.

This is another recommendation applicable if you are making an app for video or music streaming. Display some content recommendations based on users’ history and interests on their home screen. Your goal is to have them spend as much time in your app as possible, so create a content suggestion system that will grab their attention and not let go!

Naturally, you will want to monetize your application. There are two main ways you can do it: by offering paid subscription/paid purchase (depending on the type of app), or monetizing it through serving advertisement.

If you opt to go for monetization through ads, video advertising will be the optimal choice. The ads shouldn’t require clicking through to a website (since Android TV does not come with an Internet browser built in), and they should not redirect to content on Google Play that’s not compatible with TV devices.

Following all these rules and recommendations will ensure that your application runs smoothly on Android TV devices and offers a comfortable user experience.

The technology of Android TV app development is quite new, and its popularity is spreading and everyone has seen the prospects it offers. This combination of factors means that numerous developers are adding it to the list of their qualifications, even though not all of them have sufficient experience to show.

If you are looking to hire a developer for your Android TV application project, you need to consider several things.

The first and most important question is, how much experience do they have? Can they prove their qualification in this particular sphere? A trustworthy developer will always show you examples of their previous work similar to your project.

It’s also a good idea to work with a company instead of freelance developers. This way you can count on guaranteed quality of services and continuous support for your application in the future.

Knowing how to choose the right developers will guarantee the success of your future product. 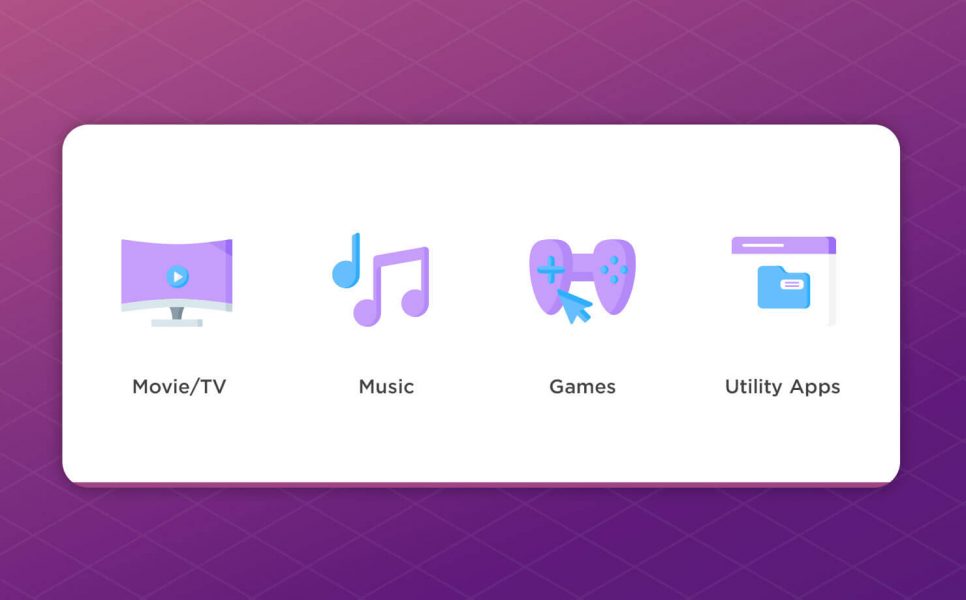 Android TV is quite a new platform, but it’s already gaining popularity and threatening to replace traditional television. The list of applications that can run on it includes streaming apps, games, and much more. However, creating a successful app takes following a certain set of requirements and recommendations. Our company has extensive experience in creating apps for Android TV and can testify for the professionalism for every developer working on your project. Contact us today to discuss your idea, and let’s build the best Android TV app together!

What Is MVP and Why Should You Build One?

Why Your Business Needs a Mobile App: 7 Main Benefits

Why Does Your Business Need a Mobile App?

Offshore Software Development: Profit or New Risk for the Company