Kubernetes vs Docker: What is the Difference?

Do you ever wonder what the difference between Docker and Kubernetes is, or which one is the best technology? The Docker vs Kubernetes debate is quite popular amongst the people who work with software containers.

But in order to get the best out of cloud-native development, software developers and data scientists need to get a clearer picture of what Kubernetes and Docker are, their differences, and if these two technologies can actually complement each other.

Today, containers are the standard de facto, amounting to 68% use in production. However, it’s important to note that Kubernetes does not make containers. Instead, it relies upon a container orchestration technology such as Docker to create them. In other words, Kubernetes and Docker more or less need each other.

According to Pavan Belagatti, “When talking about cloud-native, it is hard to ignore names like Docker and Kubernetes, which have revolutionized the way we create, develop, deploy and ship software at scale.”

In this article, we will explore the following:

But first, let’s dig a little deeper into the primary technology that brings these two technologies together – containers.

It is what you will want to run and host in Docker as it contains everything — runtimes, environment variables, files, standard input and output, operating system, and packages. Although other people have used Docker as another word for containers, the truth is that containers have been there way before Docker came into the limelight.

For instance, when chroot was introduced in the 70s, Linux and Unix already had containers, but over time, Linux containers were replaced by containerd, put into effect by Docker.

Running applications that have been containerized is so much better and more convenient than installing and configuring software. This is so because containers are portable, so you are able to build in one server guaranteed that it can work in any other server.

Conveniently, you are also able to run several copies of the same program simultaneously without having any overlap or conflict. But for all this to go according to the plan, you should have a container runtime, the software that enables you to run containers. 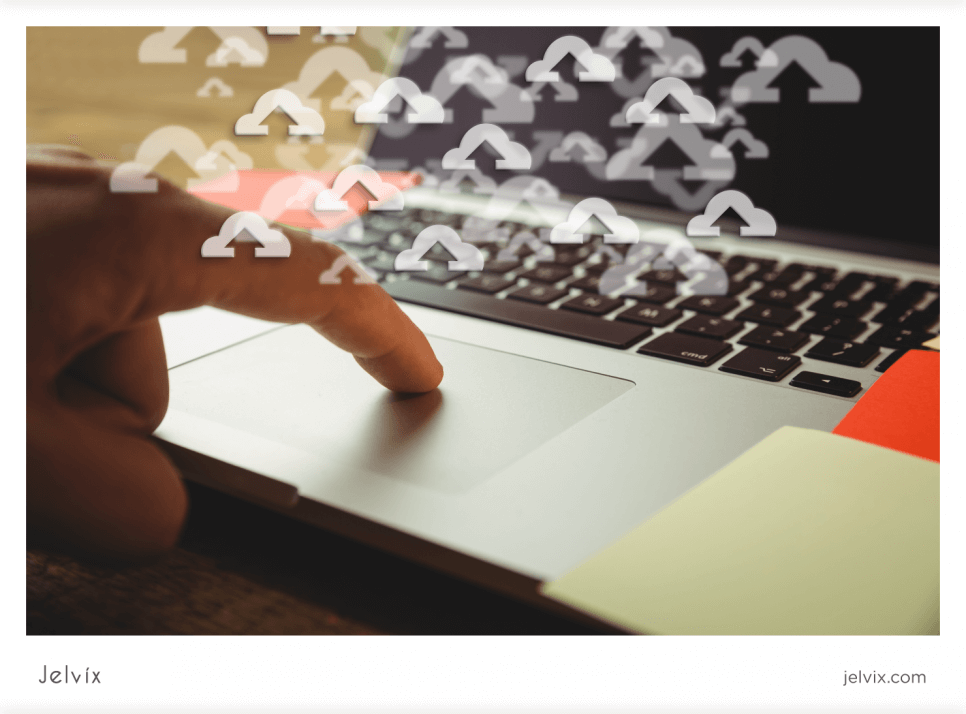 Docker is a containerization framework. When we talk of its popularity in the field of cloud and application packaging, it has definitely won the hearts of many. Docker is an open-source framework that automates the deployment of applications in containers that are lightweight and portable.

Although there were so many Docker competitors, Docker made the concept of containers widely popular and accepted, which gave rise to the creation of platforms like Kubernetes. It uses most of the Linux kernel’s features, such as AppArmor profiles, namespaces, groups, etc., to isolate processes into configurable virtual environments. 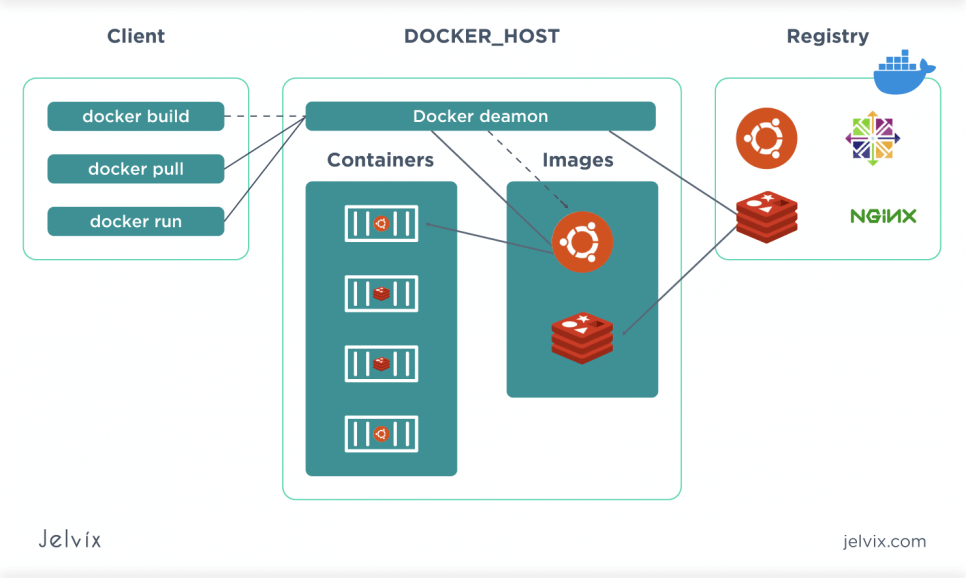 Docker uses two main artifacts that are essential to container technology. One is the actual container, while the other is the container image — a template upon which a container is realized at runtime.

Because a container cannot exist outside of the operating system, a real or virtual machine with an OS should be present for Docker to function in a continuous automated integration and continuous deployment (CI/CD) process. The machine should also have the Docker runtime and daemon installed. Normally, in an automated CI/CD environment, a VM can be provisioned with a DevOps tool like Ansible and Vagrant. 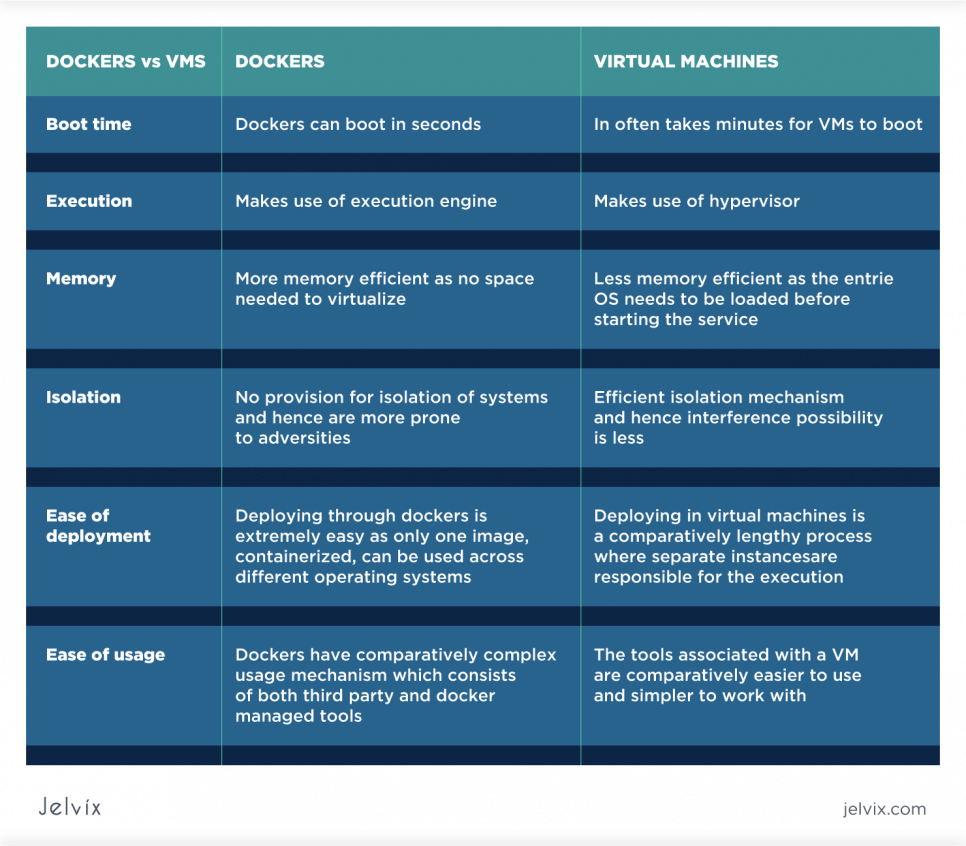 Running containers was pretty hard work before Docker existed. Now, it has enabled the process to become much easier because Docker is a full tech stack that can do a lot of stuff.

Take a look at the list below. It will help you get an answer to this frequently asked question- what is Docker used for?

Docker can help you build and deploy software within containers. With Docker, a developer can create, ship, and run applications. It allows you to create a file called a Dockerfile, which then defines the build process. When given to the ‘docker build’ command, it will make an immutable image.

Try to imagine the Docker image as a close-up photo of the application and all its dependencies. In order to start it up, a developer can use the ‘docker run’ command to run it anywhere. You can also make use of the cloud-based repository called the Docker Hub as a registry to keep and distribute the container images that would have been built.

Kubernetes is a powerful container management tool that groups containers that support microservice or single application into a pod. Generally, it’s an open-source toolkit used to build a fault-tolerant, scalable platform created to automate and manage containerized applications.

Rather than running containerized applications in a single server, Kubernetes issues them across a group of machines. The apps running in Kubernetes act like a single unit, although they may comprise an arrangement of containers paired loosely.

Pods, containers, and services (a Kubernetes abstraction that exposes a pod to the network) are hosted within a cluster of one or many computers that are either virtual or real. Kubernetes runs over a number of computers or nodes (as they are known in the Kubernetes language). 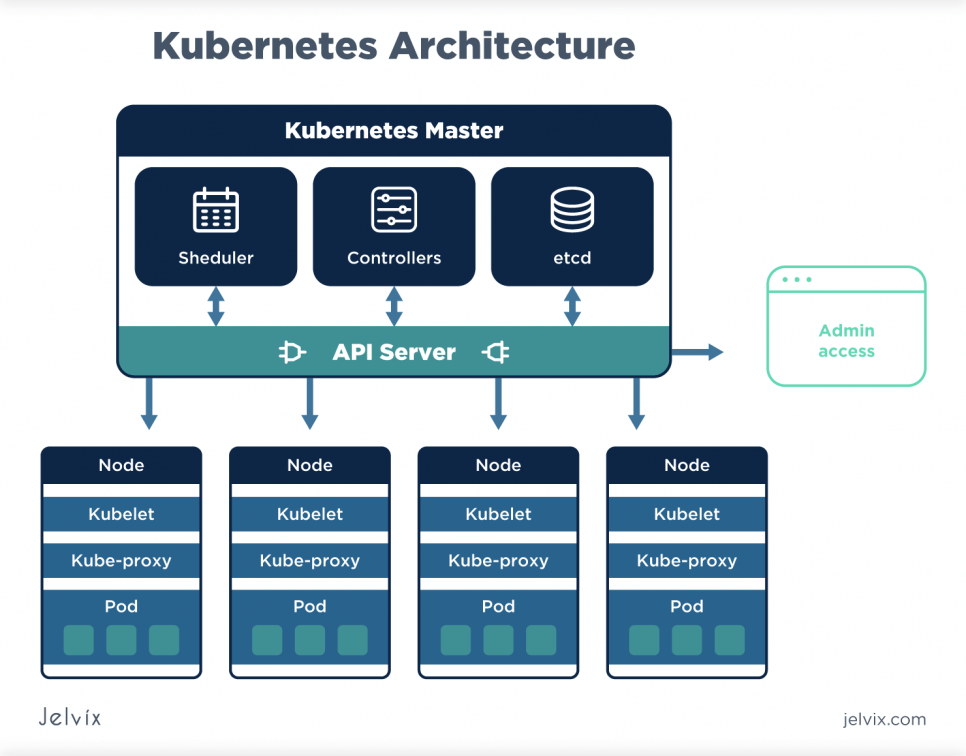 Kubernetes can add these computing features to containers:

Auto-scaling: Kubernetes can adapt automatically to changing tasks by initiating and stopping pods whenever that needs to be done.

Rollouts: Kubernetes supports automated rollouts and rollbacks. This will make seemingly complex procedures like Canary and Blue-Green releases not worth bothering about.

Self-healing: It monitors and restarts containers if they break down.

Load-balancing: requests are allocated to pods that are available.

Storage orchestration: A user is able to mount the network storage system as a local file system.

Configuration management and secrets: This feature allows all classified information such as passwords and keys to be kept under a module named Secrets in Kubernetes. The Secrets in Kubernetes are usually used when configuring the application without reconstructing the image.

Why is Kubernetes so Popular?

Kubernetes considers most of the operational needs for application containers. Here are some of the top reasons why Kubernetes has gained so much popularity:

Kubernetes deployments are fault-tolerant, versatile, and scalable. It supports upgrading or modifying pods at runtime with no interruption of service. Developers can set Kubernetes to attach more pods at runtime when the demand is increasing. This will make the applications running under Kubernetes quite scalable.

Kubernetes can repair the containers and pods automatically if a VM malfunctions. This is done on another machine running within the specified Kubernetes cluster of machines, and this shows how Kubernetes is fault-tolerant.

Kubernetes is a complex technology that is made up of components — also called resources — beyond pods and services. Kubernetes ships with default resources that facilitate security, data storage, and network management. Kubernetes can help you manage a containerized application in a more efficient manner.

The containers should be efficiently packed according to the constraints of the deployment environment as well as the cluster configuration. Moreover, Kubernetes should always be on the lookout for all running containers and replace unresponsive, dead, or every other unhealthy container.

Kubernetes uses Docker to manage containers and run images. However, Kubernetes can use other engines, for instance, rkt from the CoreOS. The platform can be deployed within any infrastructure, for example, in the server cluster, local network, data center, any kind of cloud – public (Microsoft Azure, Google Cloud, AWS, etc.), private, or even hybrid. 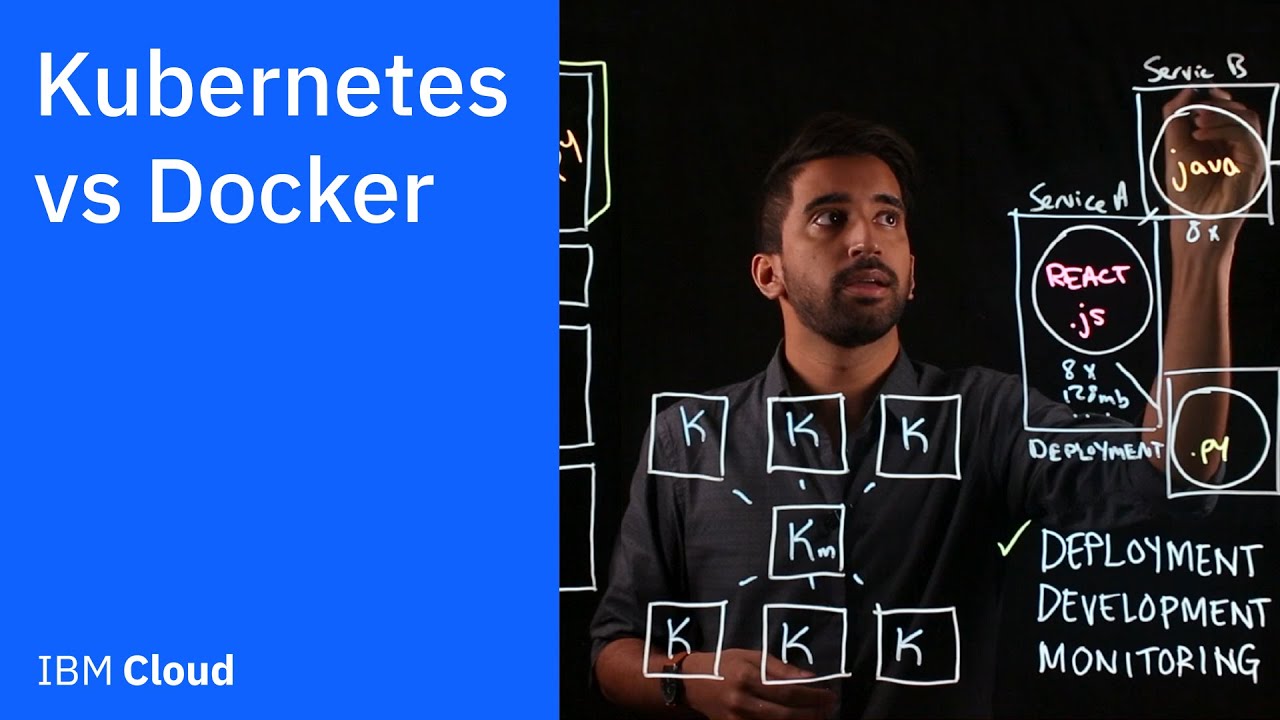 Docker vs Kubernetes: the Difference

Now that you know what Docker and Kubernetes are, it’s safe to say that these two different technologies were created to work together. These two are not competing against each other — both have their own purposes in DevOps and usually are used together.

With that in mind, take a look at the differences:

It provides a platform for building, deploying, and running containers at a much more basic level. It is the foundation on which the Kubernetes framework is built upon.

Docker vs Kubernetes: in Logging and Monitoring 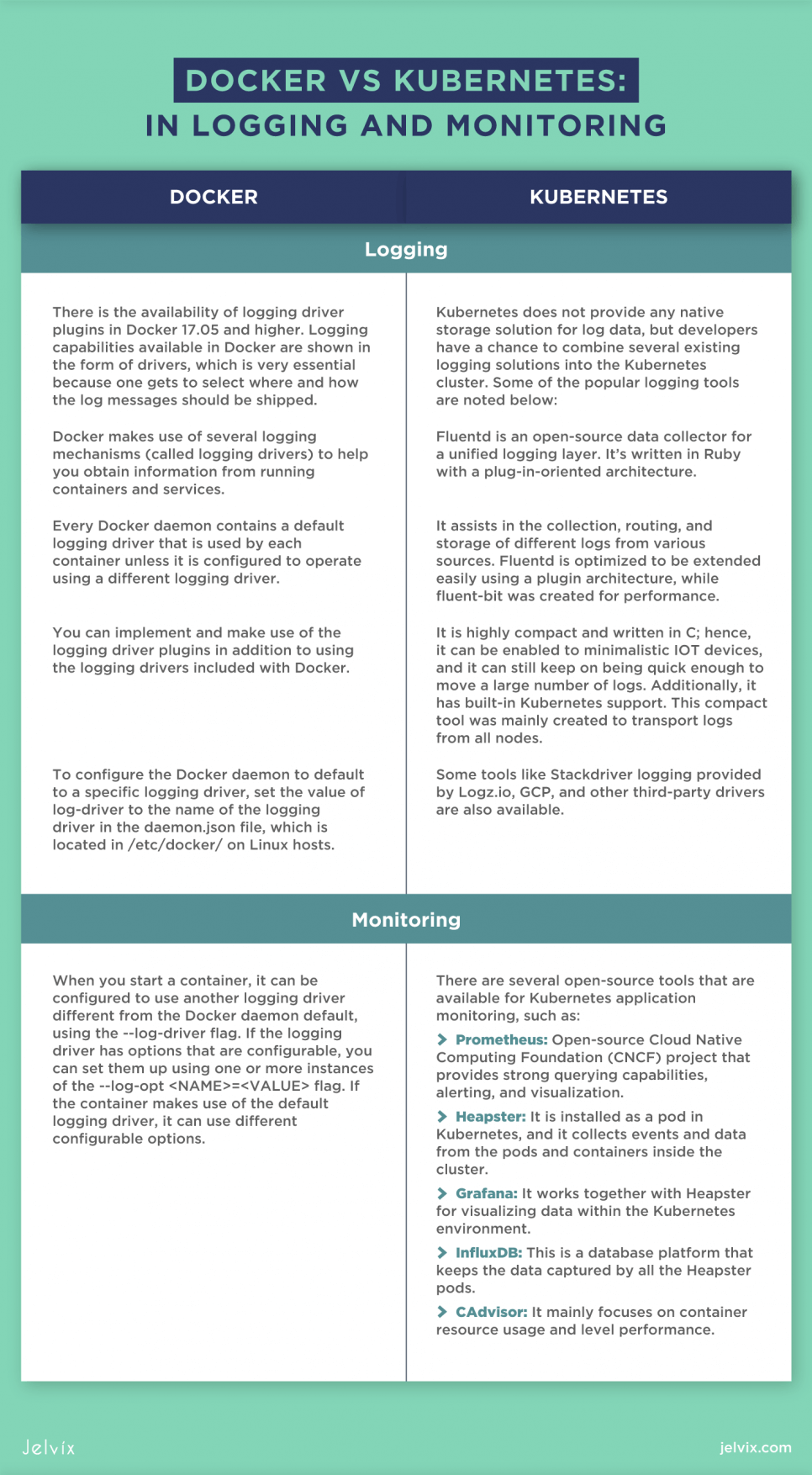 Here’s an example of CI/CD setup using Kubernetes and Docker: 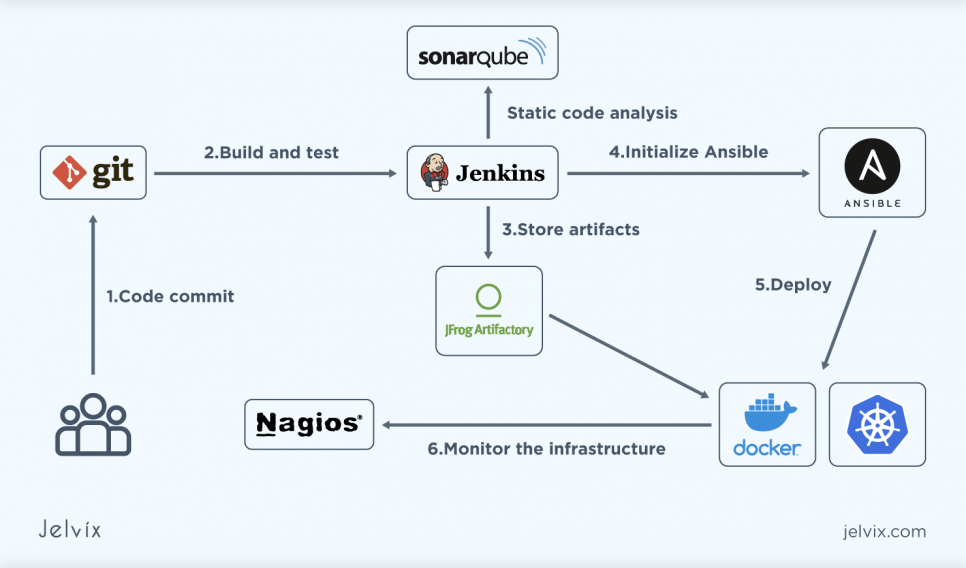 Although Kubernetes and Docker are different technologies, they work together well and make a very strong combination. You can run a Docker built on a Kubernetes cluster, but this does not mean Kubernetes is superior to Docker. Bringing these two frameworks together will ensure a well-integrated platform for container deployment, management, and orchestration at scale.

What Are the Benefits of Cloud Computing in the Healthcare Industry?

How to Choose a HIPAA Compliant Cloud Storage

What Is Cloud Data Warehouse And How To Create It Correctly