Objective-C vs Swift: A Detailed Guide

We have all been there asking ourselves this question. Should I be using Swift or Objective-C? It is a common dilemma that developers find themselves in. And you might get different answers to this question depending on who you ask. Someone may have had a bad experience with one of these programming languages, and they will always steer clear of the other one.

On the other hand, some people would go with the language they feel more comfortable with or the one they learned first. Everyone has their favorite one.

Choosing the right language for your project needs depends on a lot of different factors. This guide will look at different circumstances where one excels over the other and is more appropriate in the given circumstances. This doesn’t necessarily make one or the other better; it just means it will work best for that particular scenario.

This guide will give you directions to make an informed decision for yourself and learn about the differences between Objective-C and Swift. 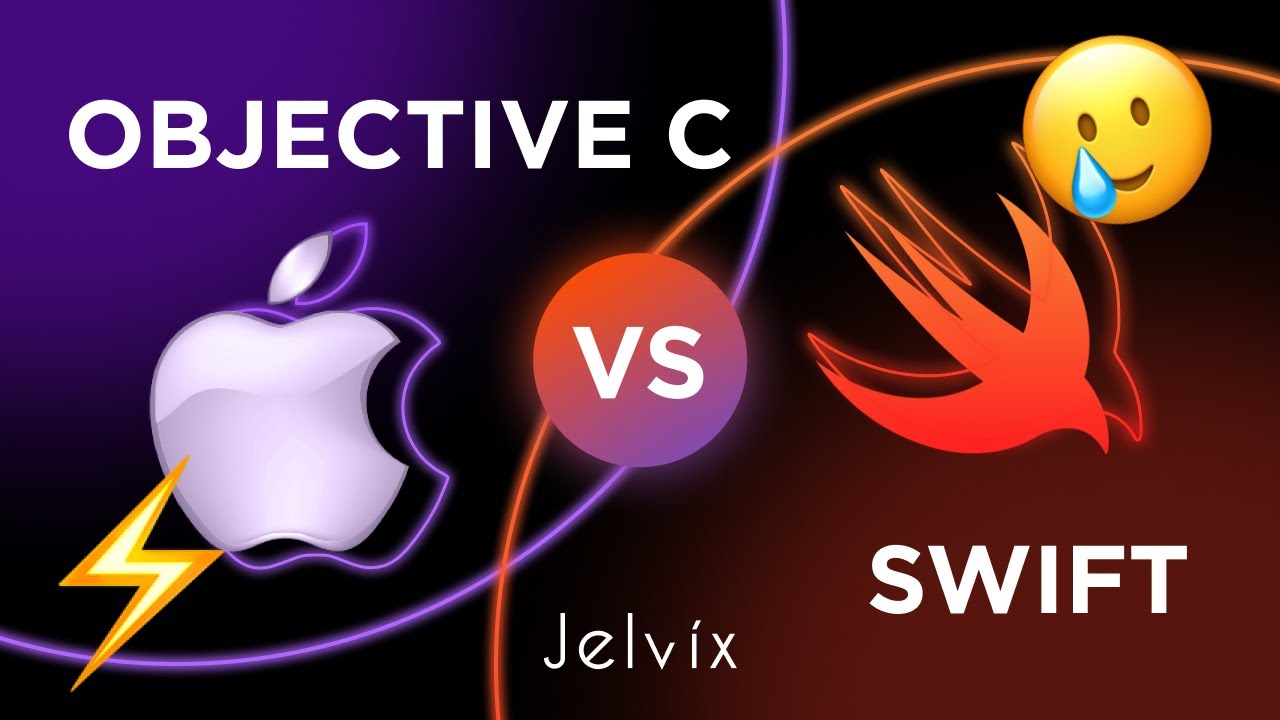 Objective-C was introduced in 1984 and used to be the main programming language for iOS and Apple OS X. It is older than Swift and offers dynamic runtime and object-oriented functionalities. Objects are at the core of building any IOS or OS X application.

Using Objective-C means that you’ll get language-level support for your object-graph management and object literals. Being familiar with Xcode is a prerequisite to using Objective-C since it is the Integrated Development Environment (IDE) you’ll be building in.

If you haven’t used Objective-C before but are familiar with some object-oriented languages like C# or Java, then it would be relatively easy for you to learn. There are a lot of established good case practices or coding rules that you need to follow while writing code in Objective-C — for example, using camel case notation while writing commands.

Swift is a newer programming language developed by Apple. Swift was released back in 2014, and developers are still getting used to it. It works for iOS, macOS, tvOS, and watchOS. Some core concepts in Swift are the same as in Objective-C, such as dynamic dispatch, extensible programming, and late binding. But Swift exceeds the ability to catch software bugs. It also addresses things like null pointers, which happen to be a common example of programming errors.

Swift programming language is open source, which means it was built by both Apple developers and the open-source community. In the early years of Swift’s release, it could already support Linux in addition to all of Apple’s platforms.

Swift also eliminates a lot of classes that are thought of as unsafe code. Swift’s objects can, by default, never be null. As a result, it’s a clean and safe way for you to write code, ultimately preventing a large number of crashes.

Swift has a unique feature called optionals. Optionals allow you to define certain instances where null would be valid, and the syntax is also very safe and easy to understand. Another considerable benefit of Swift syntax is that you can define your intent easily with keywords that are only three characters long. This saves you time while coding and can prove to be very beneficial in the long run. 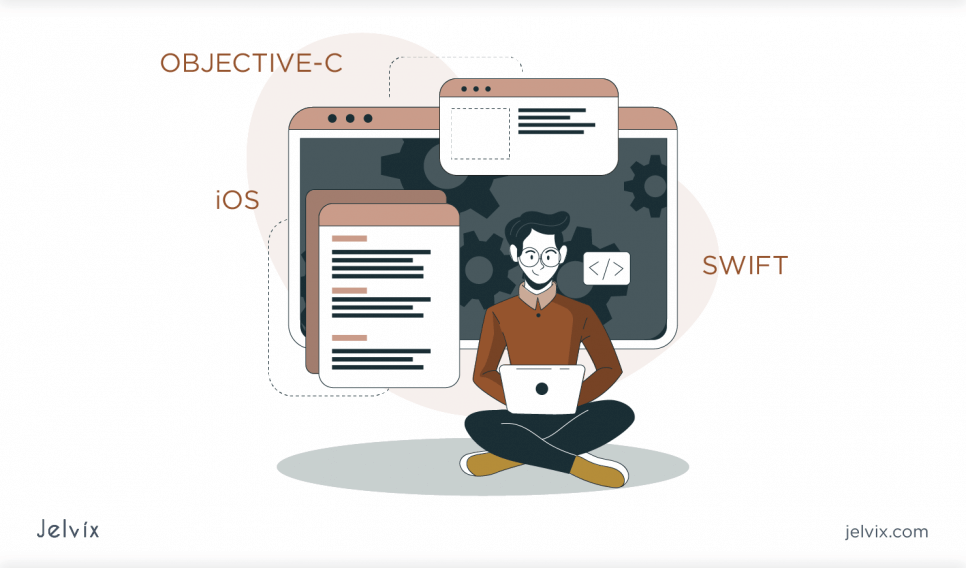 When your aim is to develop a mobile application for iOS, the first important thing you need to do is to pick up the right programming language. In terms of native app development in iOS, you get two choices: the good old Objective-C or the next-gen Swift.

Now, in order to pick up the right programming language for your project, you need to consider the pros, cons, features, and differences of both choices you have on hand. 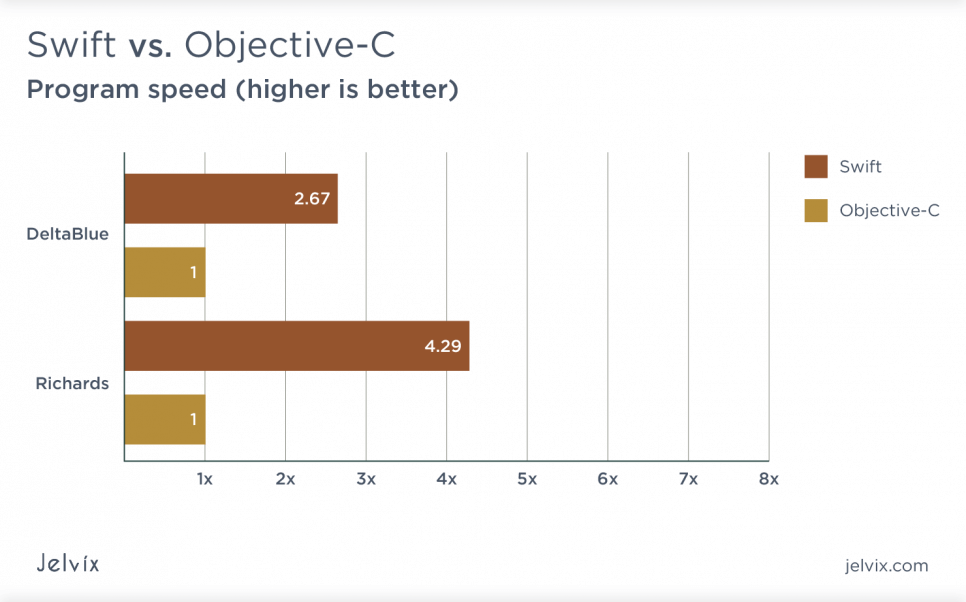 Pros and cons of both languages

There is no denying that you can develop apps faster in Swift, but that doesn’t mean it is the end-all decision to choose a programming language for your project. So let’s take a close look at some of the pros and cons of both programming languages. 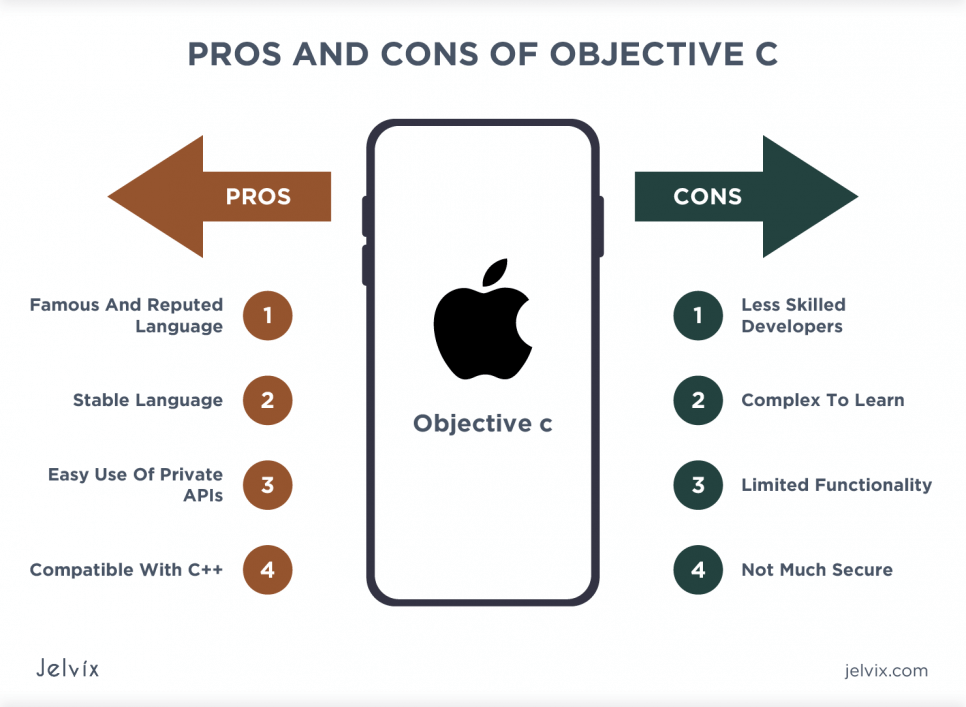 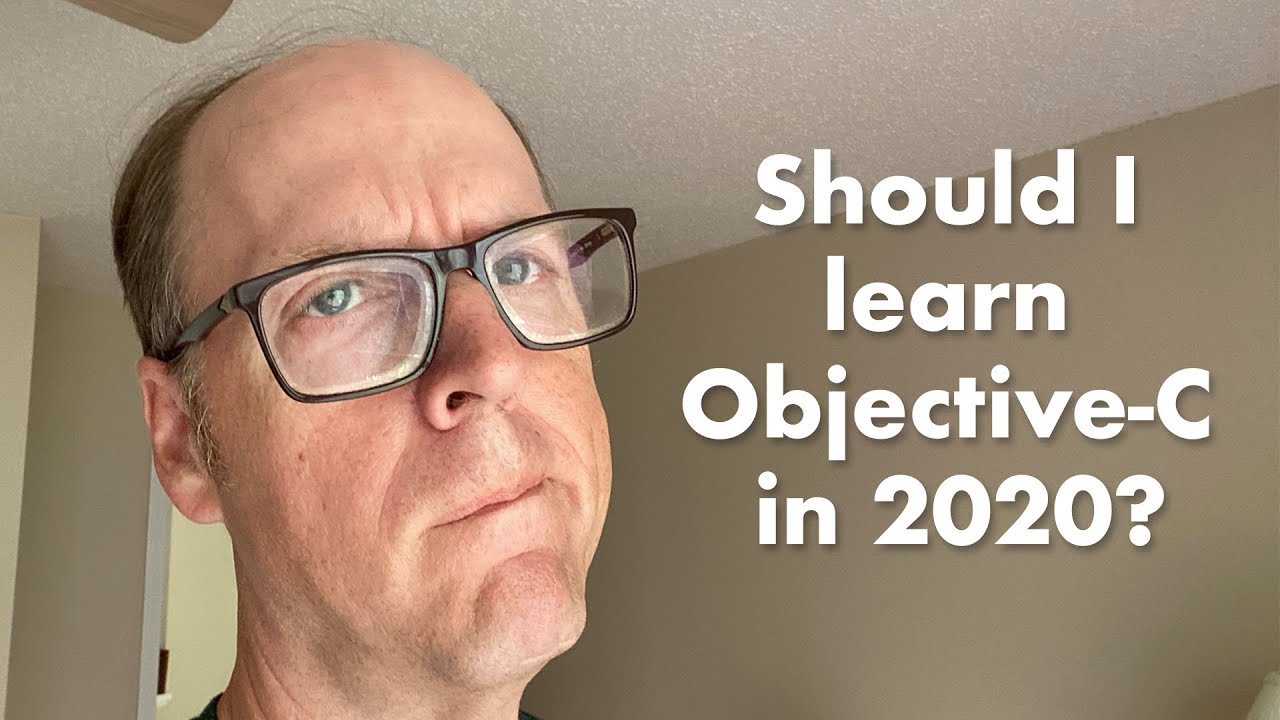 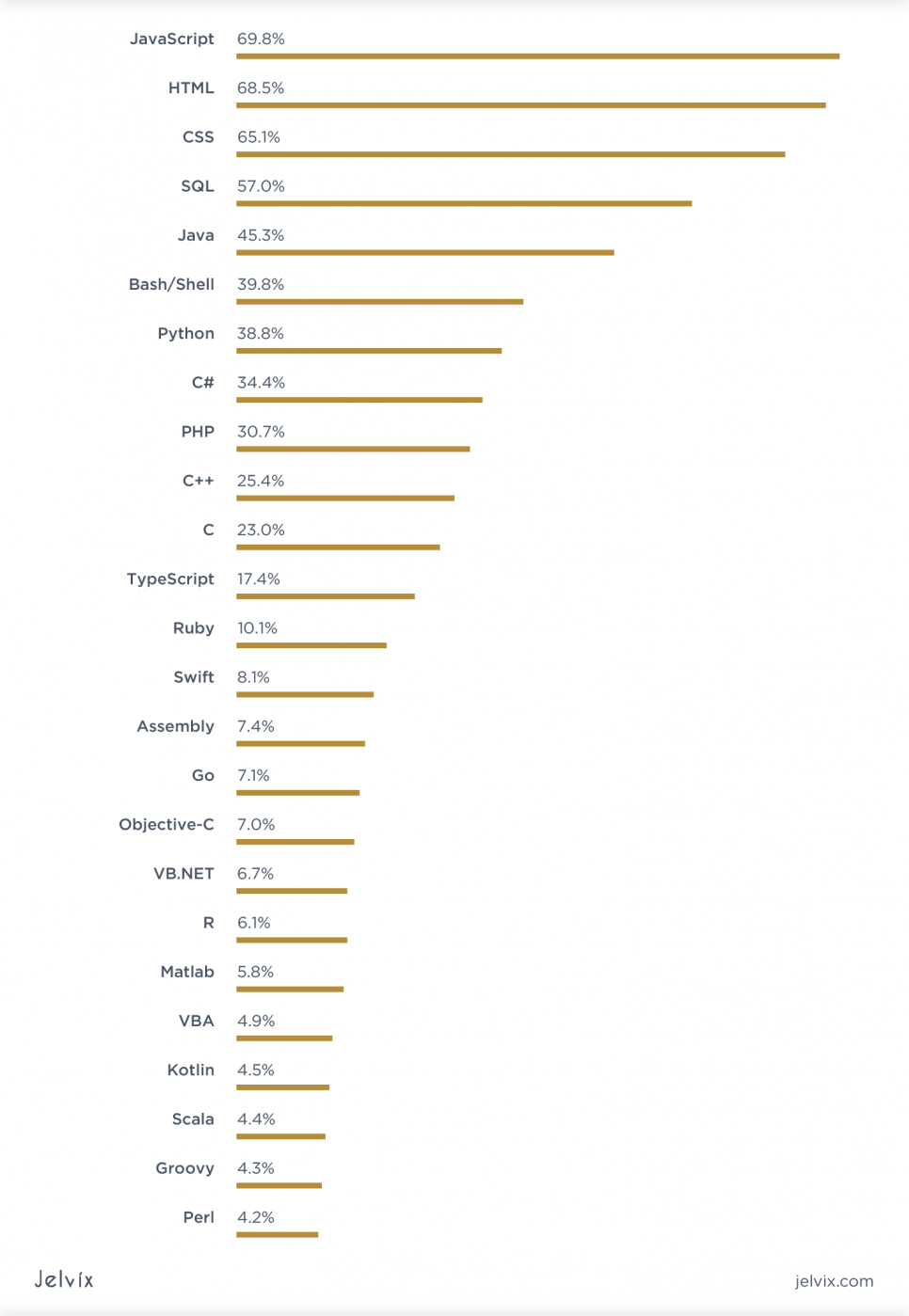 We have discussed the pros and cons of both languages and what makes one better over the other. Now let’s compare some language-rich features to make a decisive conclusion, when and why you should use Swift or Objective-C. Let’s take into account the following factors:

Swift was inherently designed to improve the safety of iOS products. It was created as a memory-safe and type-safe language. Type safety means that the language itself will prevent type errors making it very important to avoid vulnerabilities typically associated with uninitialized or dangling pointers. These types of errors are the most common in programming and the hardest to debug.

Objective-C uses null pointers, and the important thing to understand here is that pointers can cause vulnerabilities in code. They are basically a way to give developers higher access to data, and there could be discrepancies in the way pointers are handled. Swift, on the other hand, doesn’t use pointers.

If you forget a pointer in the code, perhaps, null value, the app crashes. This makes it easier for developers to find and fix bugs quickly. As a result of this, the code written in Swift is cleaner and easier to understand. Features such as optionals, generics, and type interference make sure that your app is less inclined to contain unnoticed bugs.

Objective-C was originally made from C and still depends on it when it comes to improvements and changes. Developers are supposed to manage two separate files of code to improve the efficiency and developing time and also require effort in synchronizing method names and comments.

Swift, like many modern programming languages, is easier to maintain. The LLVM compiler automatically figures out the requirements and completes the required incremental builds.

The main goal of Apple with Swift was to design a simple and understandable language. One of the core differences between Objective-C and Swift is that Swift uses all the industry standards to help write clean code. Objective-C, on the other hand, is not too famous for handling code complexity. Any developer who is familiar with modern languages like JavaScript or Python can learn the Swift language quickly.

Objective-C has an inherent complex code structure since it’s built on top of the C language. It includes a lot of different symbols, lines, parentheses, conditionals, and semicolons. One of the many reasons Swift has become popular is because of its simple and easy-to-understand syntax. This makes the language relatively simpler to both read and write.

You also need fewer code strings in Swift, and it resembles natural English statements, just like many other higher-level programming languages.

You need to write code that isn’t too hard to measure to manage your program successfully. The fewer lines of code your app has, the easier it is to maintain and scale. If we take a brief look at the Objective-C code, we will notice that it is very verbose and requires a lot of code to link two pieces of information.

Developers need to use special string tokens and provide a list of variables to replace each token, not to mention that messing up the order or using the wrong string token causes the app to crash.

One of the important benefits of Swift is that it requires less code for string handling and repetitive statements. Swift uses string interpolation so developers can insert variables directly. This also helps avoid a lot of crashes that take place in Objective-C.

Objective supports ARC (Automatic Reference Counting) inside the object-oriented code. However, the issue is that it cannot access C code and other APIs like Core Graphics. This causes extensive memory leaks and affects memory management. On the other hand, Swift is more consolidated and supports ARC for all APIs.

This allows a streamlined way for memory management. The issues with Objective-C can be solved by making ARC complete with the object-oriented code paths, thus saving the developer’s time and making them worry less about memory management.

You don’t need to get used to a new IDE if you’ve been using Xcode to write iOS apps. All the latest versions of Swift are catered to the new Xcode upgrades. Objective-C, on the other hand, has a superior runtime as compared to Swift. It’s probably going to take some years for Swift to catch up with that.

Objective-C is also your best option if you are using powerful SDKs. However, Swift is a safer option in terms of stability and the ability to handle errors.

One thing that is important to note here is that even though runtime allows programmers to remove a lot of boilerplate and to write smaller programs, it can make bugs difficult to debug. It is a double-edged sword and can cause some problems for the developers. The Swift core team is committing a lot to it and is adding powerful dynamic features to it. The ground for that has already been laid in Swift 3.

The Swift community is also putting a lot of work into developing powerful libraries to make it easier for developers to solve problems statically instead of dynamically in Objective-C. However, the main concern of the users of Swift is that Swift does not seem to provide anything comparable to Objective-C solutions.

So back to the initial question, “Which one should I pick for my project? Should I learn Objective-C or Swift?” The answer for most people will be Swift. Apple is actively pushing Swift to be its go-to language for iOS development. Consequently, Swift will only continue to become more performant as ABI stability matures over time until Swift becomes packaged with the OS itself.

Swift is also being used along with Objective-C to develop Apple products, so to use Swift in Objective-C is also a viable option. If you are looking to get a job as an iOS developer, Swift is the language you might want to learn.

Most startups and some mid-level companies are starting to write their iOS apps completely in Swift. This means that your chances to be able to apply for and secure a job can increase dramatically if you learn Swift. Even at larger companies where Objective-C is still being used heavily, interviews can still be done in Swift.

With that said, there can be certain circumstances where you may lean towards one language over the other based on your team’s familiarity, your own experience, or the timeline and size of your project. Always weigh the pros and cons of your runtime, tooling support, stability, and APIs.

All these factors must be taken into consideration when deciding which language to go with. Regardless of what you choose, Swift is becoming the go-to programming language for developing Apple products.

How to Port Android Apps to iOS?

4 Ways to Focus your Mobile App in the Right Direction