Tech Trends in the Automotive Industry

The automotive industry has undergone a serious transformation in recent years. Instead of cars that used to be superior to each other only in horsepower and design, the world became acquainted with truly revolutionary solutions, such as Tesla. It would seem that Elon Musk’s brand was significantly ahead of its time. But no. A few days ago, the public was shocked by Elon Musk’s statement that all patents that once belonged to his company now belong to all of humanity. And this means that now absolutely any brand can use its best practices in their products. This was, of course, a serious step in the fight against global warming. In the wake of this, we decided to devote our article to a review of the most current automotive industry trends.

One of the major technology trends in automotive industry is the production of cars initially created for car sharing. In particular, they include a special telematics device that captures the driving habits of each next user. This, in turn, provides maximum convenience for insurance agents. So, thanks to the insurance being based on the indicators recorded by this device, the accuracy of the conclusions on insurance claims will increase, which means that the drivers themselves will be able to count on maximum justice. That is, if you are a cautious driver who observes all traffic rules, your skills will bring you big insurance dividends, unlike those who practice a less safe driving style. For example, telematics devices will regularly record the time, duration and routes of your trips, as well as periods of acceleration and wagging on the trajectory. Thus, the new insurance format will be able to take into account all the things that traditional car insurance does not take into account today. 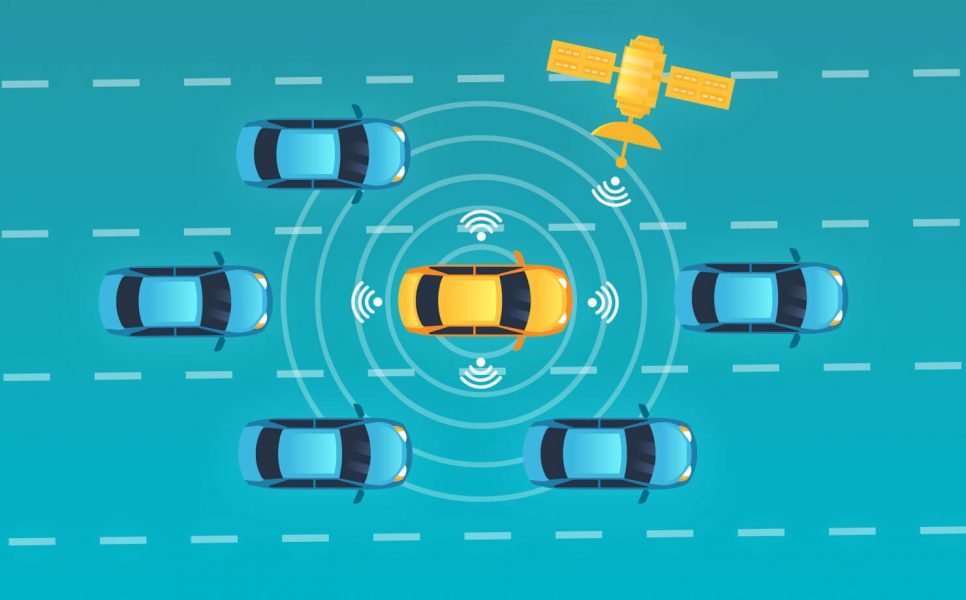 The introduction of artificial intelligence based vehicle control systems

Humanity is on its way to unmanned vehicles. According to various assumptions, today we are either in the middle of the road or at the final stage, but one thing is clear: the end is not yet close. Experts, in their predictions, designated the 2020s and subsequent years as the era of full-fledged auto-piloted vehicles emerging on the market.

At the beginning of 2017, Waymo announced a reduction in price by 90% of the main component of its unmanned vehicles: the lidar. This is very important news for the industry: previously the system of high-precision lasers was more expensive than the car itself, but now it has become much more accessible. Waymo, instead of installations costing $75,000, got those that cost $7,500.

Tesla has been working even harder on developing software for its unmanned vehicles. Previously, the company used graphics processors from Nvidia, then cooperation with AMD was in the plans, and afterwards, Musk went so far as to say that he was preparing the best AI-based autopilot in the world, relying on the efforts of exclusively his company’s specialists. As a result, at the end of 2018, the world was shocked by the news of a drunk Tesla driver, who had been moving around the city with full compliance with the traffic rules until police officers noticed him asleep behind the wheel. Is this not a success?

And now – even more amazingly – it turns out that according to research by the independent American company Consumer Reports, the semi-automatic driving system of the Cadillac brand (a member of the General Motors alliance) turned out to be more advanced functionally than the Tesla autopilot. We believe this proves that in the near future, autopilots will be able to, perhaps not completely, but largely replace human resources in the field of motor transport management. 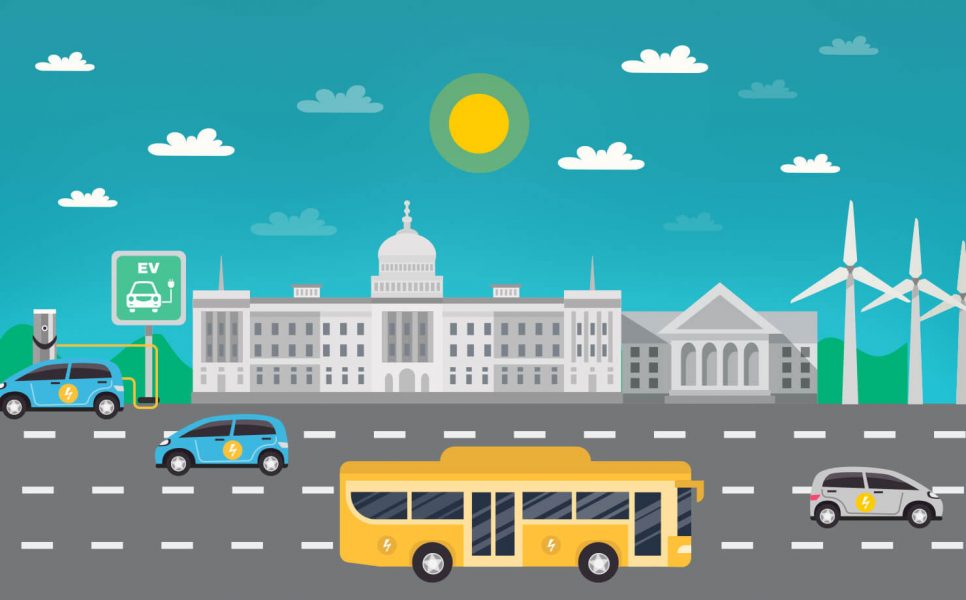 Did you think hybrid vehicles were the prerogative of world-known car manufacturers, like BMW or Toyota? Think again. In the European city of Tallinn, the mayor’s office is gradually replacing the old trolley buses with “more comfortable and environmentally friendly” Volvo hybrid buses. Hybrid buses have many advantages, one of them being, of course, speed. In addition, this type of transport does not depend on possible power outages or any other obstacles, which in the case of trolley buses will lead to the whole fleet stalling. The hybrid bus is safer and faster in this regard.

It is also equipped with air conditioning, so in the summer the cabin does not get hot, and in the winter it is better heated. The seats are more comfortable, and there are security cameras, so that the passengers can feel safer.

Besides, hybrid buses do much less harm to the environment, since they independently produce about a third of the electricity they need (here we are talking about the use of regenerative braking technology). The specificity of the hybrid buses used in Tallinn is that they use both electricity and diesel fuel. When braking, the buses save energy in batteries, and when moving from a stop or a traffic light they use electricity. This reduces air pollution in the city. At the same time, upon reaching a certain speed, the diesel engine automatically turns on.

Implementation of biometric identification of drivers

In recent years, we have seen anti-theft systems with a fundamentally new work algorithm not tied to the device, but to the person who owns the car. In addition, this technology of data transmission and modulation of the signal from the controller to the wireless relay is not yet familiar to the vast majority of hijackers, which means that the risks of car theft will be minimal. As a rule, such solutions are delivered immediately to the OS of the on-board computer, which means that their owners will not have to buy and install the application themselves.

And now about the benefits of biometric anti-theft systems. Due to their functional features, such systems exclude the most common methods of hijacking: theft or copying of keys or electronic cards from a car, as well as the seizing of a car (the systems read the fingerprints or recognize the owner’s face every time the driver’s door is opened or the brake pedal is pressed). Moreover, if the driver is forced to start the car, he has the opportunity to use an “alarm finger.” In this case, the car will start, but stall after a while. As for the signal from the controller to the relay, no one has succeeded in intercepting it yet, despite numerous attempts. It is also noteworthy that these biometric systems are mostly integrated with satellite systems. For business-class cars, this is relevant in connection with the requirements of insurance companies. 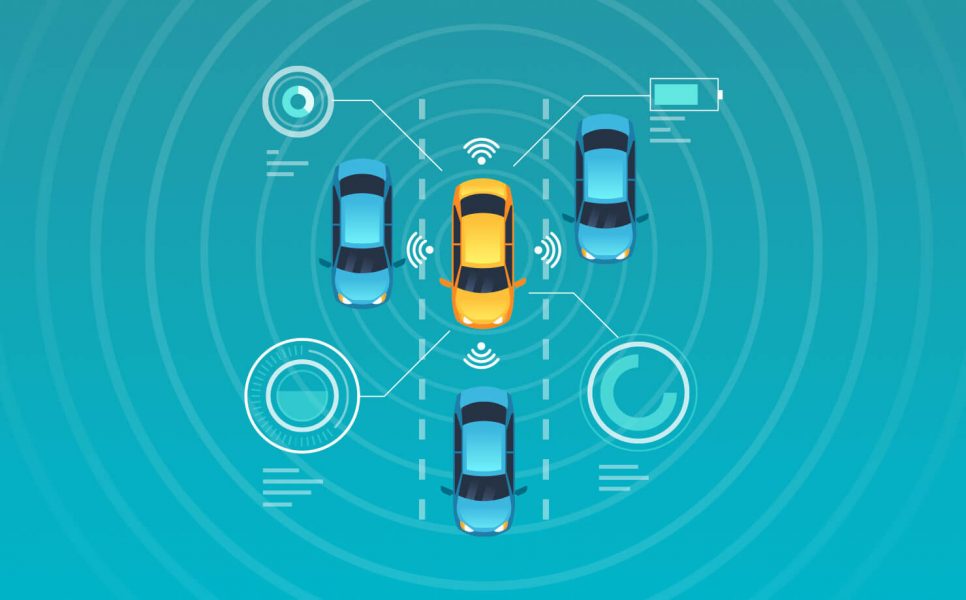 Our top automotive industry trends in 2020 are completed by V2X systems, which belong to the newest generation of Intelligent Transport Systems. They include V2V (vehicle to vehicle) and V2I (vehicle to infrastructure) tools and systems.

The latest digital systems have been designed to enable the exchange of information between cars and roadside infrastructure (for example, road signs or traffic lights), as well as between different vehicles. Thanks to the use of radio waves, data exchange is very quick. This means that the speed of sending and receiving information is much higher than when using a GPS or GSM network.

The V2V tools installed in the car and connected to its computer inform other vehicles about events such as the activation of the anti-lock braking system (ABS). This information will be displayed on the screens of other vehicles when they approach the place where your car’s ABS system initialized. Other drivers can be informed about traffic jams, accidents and other events. Using the same type of data exchange, V2I systems allow the vehicle to communicate with the components of the roadside infrastructure: your vehicle will receive a message about the established speed limit or difficult road conditions.

These solutions have already been tested on European roads: in Vienna and in Prague. In the future, they will be implemented on all roads that belong to the European Transport Corridor. Today, the real leader in the use of V2X systems is Japan, where the car manufacturer Toyota is already selling cars equipped with V2X systems.

Let's sum up. As we can see, in the coming years the auto industry promises not only to improve “on all fronts” of the current latest trends in the automobile industry, but also to find fundamentally new ones (we are all waiting for what Elon Musk comes up with next). If you have any ideas related to the field of software development for cars based on technological trends in the automobile industry, please contact us at Jelvix: a company with tremendous expertise in developing such solutions. We are happy to take up your project!

IT Trends in the Transportation Sector

IT Outsourcing Trends for 2020