MEAN Development: Choosing MEAN Stack Development for Your Next Project

There’s no wonder that we’ve already entered the digital era, and application development has become an integral part of it. Regardless of the app that you’re going to create, you’ll need a software stack that is both standardized and consistent. To create a robust backend, developers need an advanced toolset, which can optimize the development time and streamline the resources.

Luckily, the abundance of software stacks has significantly simplified this process. Developers can choose from hundreds of different solutions, including Ruby on Rails, LAMP, Django, and many more. Moreover, by effectively combining various technologies, it becomes possible to achieve better and faster results for web and app development.

In this article, we’ll uncover an excellent example of such an approach – the MEAN stack. You’ll be able to discover what the MEAN stack is, why it’s worth learning, its pros and cons, and use cases.

What Is MEAN & the MEAN Stack Development?

MEAN is a relatively new stack, that refers to the collection of four user-friendly full-stack JavaScript frameworks: MongoDB, Express.js, Angular.js, and Node.js. These frameworks are typically used for building dynamic, fast, and robust cloud-ready apps and websites. Being free and open-source allows the creation of rapid prototypes for applications of a different range. In most cases, it’s web-based applications.

What is the MEAN stack meaning? Basically, it’s an abbreviation of four different components it employs:

It’s worth mentioning that there are multiple variations to the MEAN stack, such as MERN (replacing Angular.js with React.js) and MEVN (which uses Vue.js). However, the MEAN model is one of the most popular technology concepts for building web and app full-stack solutions today.

One of the best features of the MEAN stack that made it so popular is its language: JavaScript is a single language that runs across every code line of the application. Apart from the convenience, that’s an excellent deal for making web and app full stack development more efficient and modern.

With MEAN, developers can create scalable applications, which are optimized for cloud deployment and simplify the deployment with a built-in web server. Also, it enables streamlining development using a single language across the entire application, yet effectively manages large amounts of processes and data. 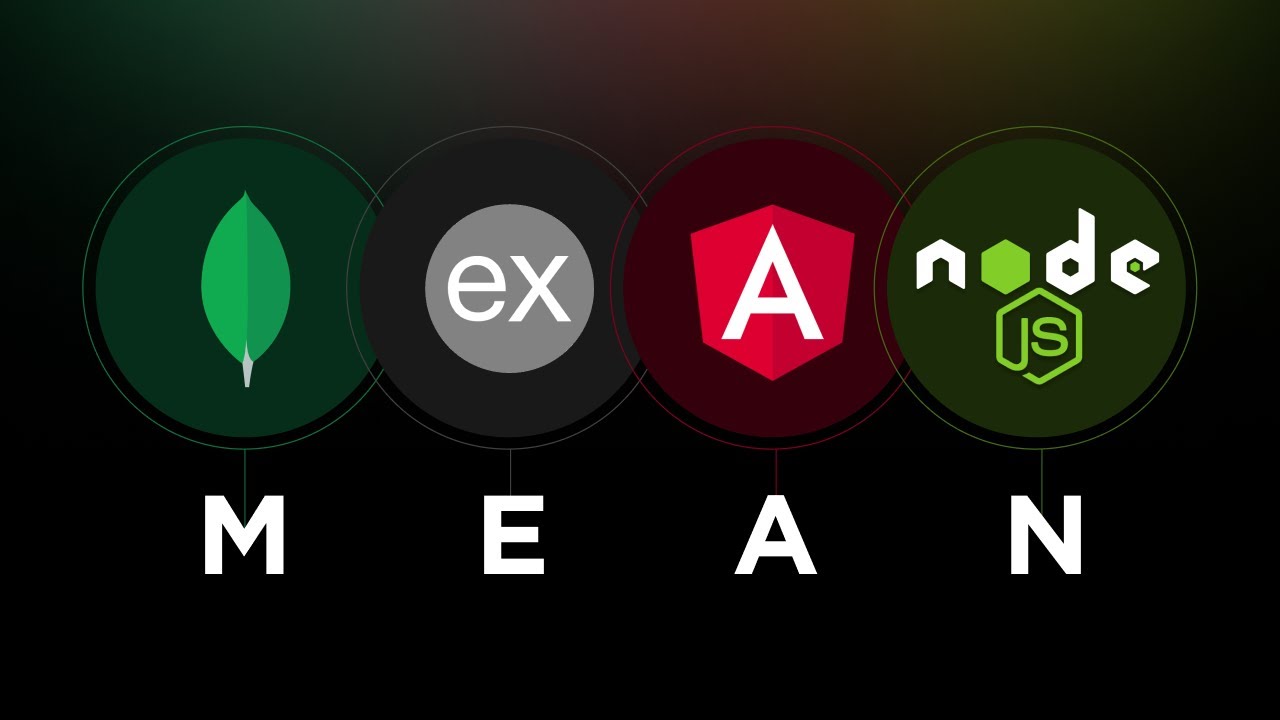 Core Components of the MEAN Stack

Having learned the definition of the MEAN stack, it’s now time to uncover the components it employs to perform various web and app development. As mentioned previously, the MEAN stack development combines a coordinated work of four JS-based components: MongoDB, ExpressJS, AngularJS, and Node.js.

MongoDB is an open-source, NoSQL database designed for cloud applications. In other words, that’s a JavaScript-based storehouse for the application’s data, which is highly scalable and excels at overall management of massive amounts of data.

Its simplicity and ease of use make MongoDB an excellent programming option for various aspects of web and app development. According to the 2021 survey by Statista, 17.9% of respondents identified MongoDB as one of the most-wanted database skills. In fact, it was the second most popular database skill across the globe after PostgreSQL, which gained under 18%.

The second essential component in MEAN programming is Express, a web application framework for Node.js. It handles core interactions between the frontend and the database, ensuring a smooth transfer of data to the end user. Express also avoids app cluttering and features excellent error handling and templating functionality to enhance the development process.

It’s worth mentioning, that as of 2021, ExpressJS stands on the top of the most used web frameworks among developers worldwide, after React.js and jQuery. The recent survey shows that 1 out of 5 respondents utilizes Express on a regular basis, which only proves its functionality in the development process.

Node.js is an open-source framework that uses asynchronous events to process many connections at a time. It is considered to be an ideal framework for cloud-based app development because of its on-demand scalability and fast data serving.

Node.js is also a so-called “backbone” for ExpressJS and is used to connect with AngularJS to facilitate the data serving, which is essential for cloud solutions. Unlike the other single-thread frameworks, Node.js can support as many as a million simultaneous connections.

How Does MEAN Stack Architecture Work?

Generally, MEAN stack architecture is based on five different stages that cover Client, AngularJs, NodeJs Server, ExpressJs, and MongoDB components. To get a better idea of the performance of each framework, below we provide a short overview of each process.

Valued for its scalability, flexibility, and consistent language, the MEAN framework can provide a wide range of advanced development opportunities. Having researched what is MEAN stack development and how it actually works, it’s time to discover its benefits for web and app creation. Below you’ll find the list of most significant advantages that make MEAN so important in development today. 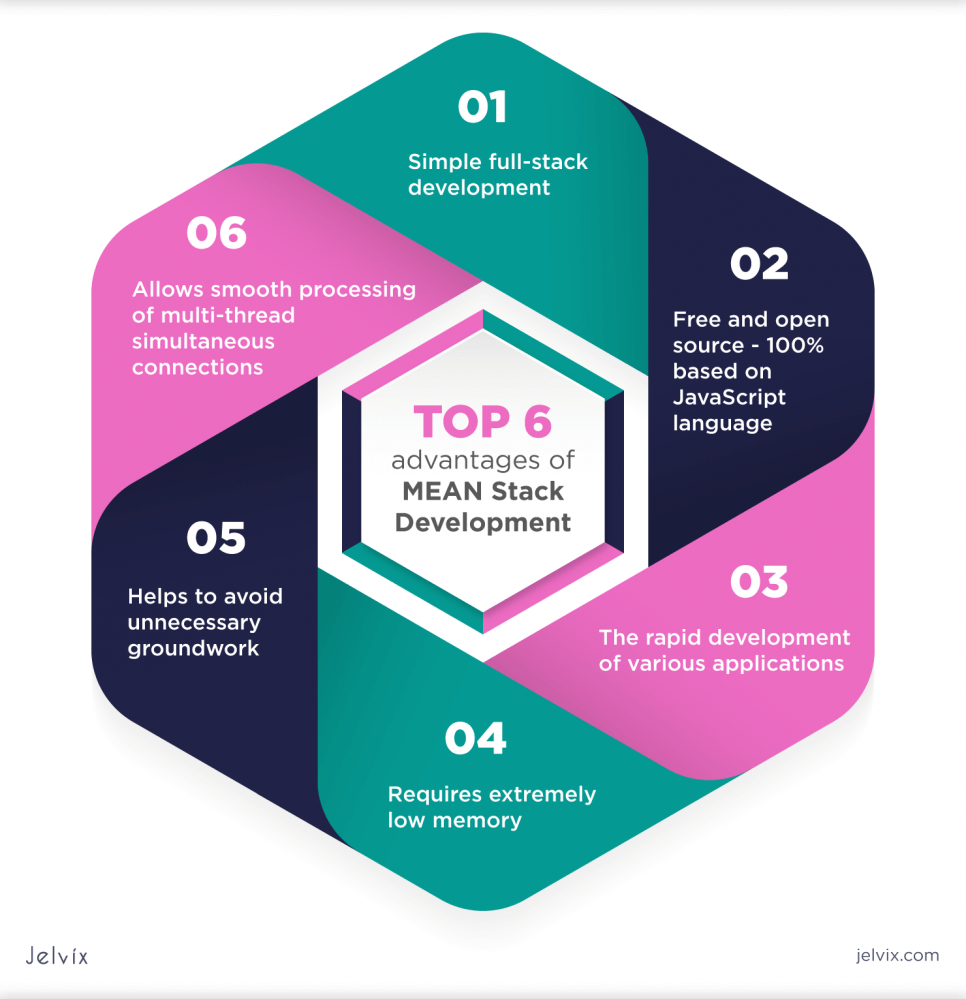 Apart from the technically-specific advantages of MEAN development, this approach is highly popular because of the first-class user interfaces: it supports MVC (Model view controller) architecture, which provides a functional and convenient UI. In terms of the last one, business owners will require fewer narrowly-expertized developers compared to the alternative stacks such as, for instance, LAMP. And its flexibility, reusability, and speed make it an ultimate solution for working with massive libraries.

Being aware of all these benefits, more and more business owners choose MEAN stack technologies as the first-priority full-stack development model for various projects across many industries today.

To be able to evaluate the full potential of MEAN for a certain business, it’s also essential to analyze the probable pitfalls it covers. The following aspects are explaining the cases in which the MEAN model might be difficult to work with:

Knowing these simple “cons” of the MEAN architecture can help business owners to better prepare for the project development in the early stage and create a well-optimized, resource-effective, and functional web or app solution.

The outsourcing industry is set to change drastically. Let's discuss which IT outsourcing trends will change the industry in 2023.

Similar to many other development models, MEAN stack technologies aren’t perfect for every application. However, there is a wide range of use cases where this model was successfully applied.

In most cases, it’s a worthwhile option for developing cloud-ready applications due to the scalability, cost-efficiency, and ability to manage concurrent users. The Angular JS frontend framework also makes it ideal for creating single-page applications, known as SPAs (used for delivering all the data and functionality within a single page). Finally, it’s an excellent option for JavaScript app development, particularly those in Node.js, high-throughput APIs, and microservices of different ranges.

According to Stackshare, over 50 brands and enterprises with worldwide recognition use the MEAN framework in their tech stacks. These include the companies such as UNIQLO, Accenture, Fiverr, AngularClass, Vungle, and many others. 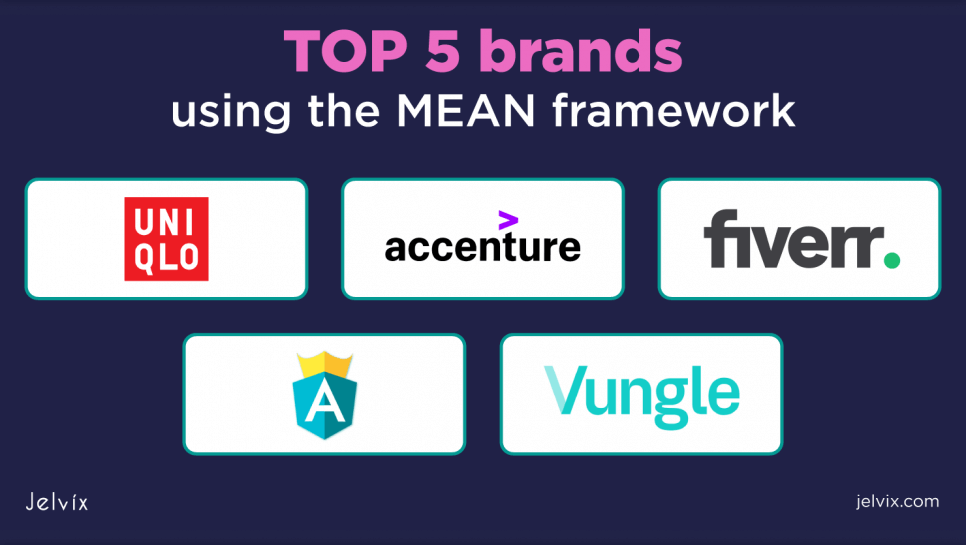 In this section, we’ll review the MEAN stack developer’s meaning, identifying the key responsibilities of this professional and how much it costs to hire a dedicated MEAN engineer.

What Is Mean Stack Developer Salary? 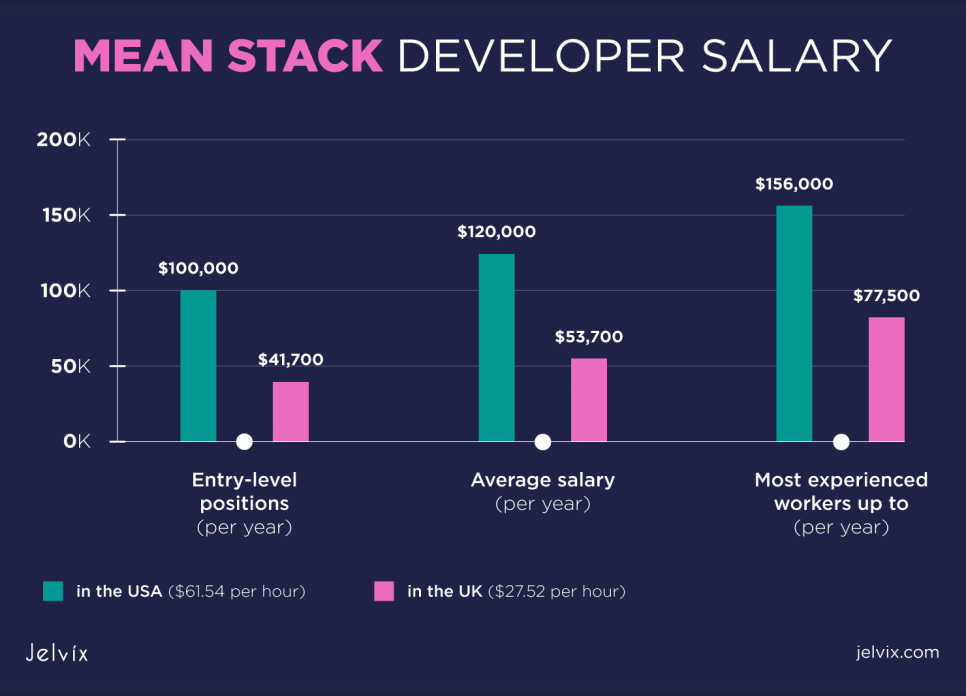 First of all, a MEAN stack developer is a specialist with expertise in MongoDB, ExpressJS, AngularJS, and Node.js components. They often have extensive knowledge of JavaScript and its associated programs and frameworks to build websites and applications. And, unlike other experts, MEAN developers typically work on both frontend and backend stages. 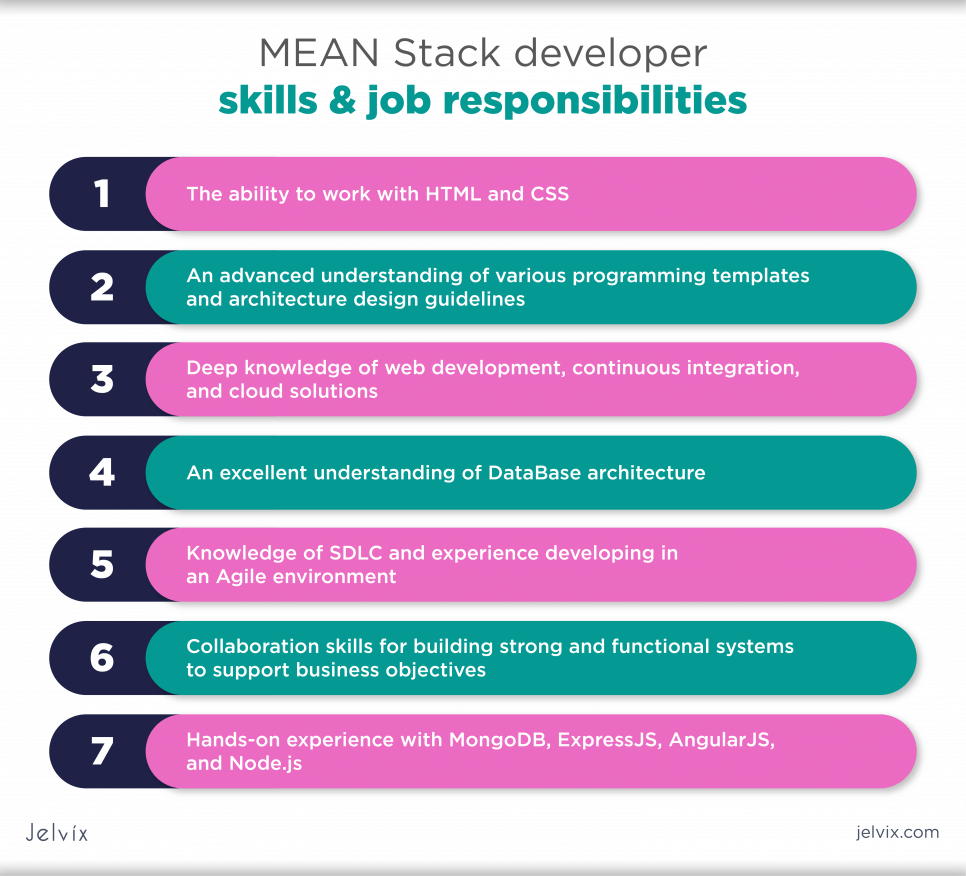 A MEAN stack developer will be responsible for quickly delivering various mobile and web solutions that can grow in size. Their essential job responsibilities also cover application testing and debugging and application hosting on various web servers, including cloud technologies.

These experts should also know the basics of DB development and maintenance, as well as how to integrate the existing apps with other software solutions and websites.

What’s the Difference Between MEAN Stack and Full Stack?

Though both models refer to multi-framework development solutions, there is a significant disparity between the MEAN stack and Full-stack development. And the first difference refers to the definition of both models. 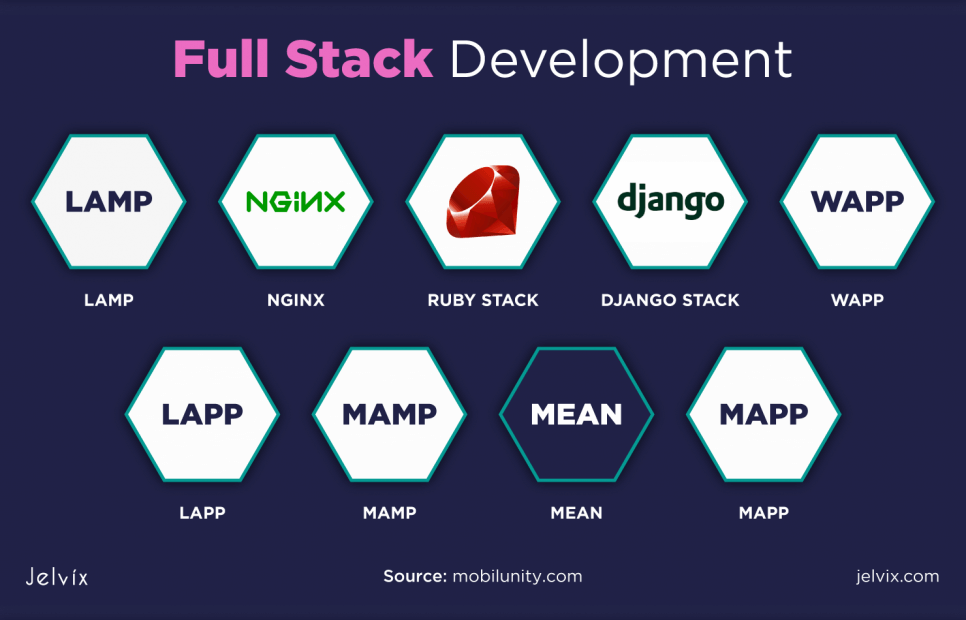 So, the MEAN stack is one of the categories of full-stack development that exclusively focuses on four key frameworks: MongoDB, ExpressJS, AngularJS, and Node.js. And, since it follows the guidelines of full stack web development, developers have access to both front- and backend development capabilities of a website or application.

The MEAN stack model is fully based on the JavaScript language, while full-stack also implies using other programming languages, such as:

Therefore, full-stack developers have a deeper experience in various programming languages while they develop their web or mobile products.

Finally, MEAN stack developers use MongoDB for scalable data storage and retrieval. Typically, it exists on the cloud, so these developers require a basic knowledge of cloud solutions. On the contrary, full-stack developers aren’t limited to the type of storage databases or open-sourced content to build their applications. Typically, they work with a wide range of different databases, like MySQL or Oracle, while with the MEAN model you cannot choose another option rather than MongoDB.

Once the MEAN stack developer skills and salary rates have been discovered, it’s time to shed some light on the future of MEAN full stack development.

As it was already mentioned above, MEAN stack development is completely built on the JavaScript language, which opens up a wide range of perspectives for web and app development. Many companies have considered the benefits and potential advantages of this method and started applying it across various projects.

The functionality of MEAN stack components has given it the ability to develop dynamic applications, which are robust, fast, and maintainable. In fact, there are many reasons why this model is worth it:

What is more, this scope has become a lucrative career option for many developers today as well. Not only does it cover multi-framework skills and deep knowledge in web and app development, but also adds to employees’ flexibility and value. Therefore, in the upcoming decade, the framework is expected to recommend itself as a lightweight solution compared to alternative models.

Having analyzed the basics of the MEAN stack development model, business owners can now get a deeper understanding of its potential for upcoming projects. Designed with four JavaScript-based components, MongoDB, Express JS, Angular JS, and Node.js, MEAN stack architecture is an excellent option for web and app development, especially for small and mid-scale cloud solutions.

However, the final outcome of your MEAN project fully depends on the experts you hire. For sure, you’ll want to engage first-class professionals with prominent experience in MEAN project development.

Jelvix has vast experience working with hundreds of organizations across the globe, helping them to develop the desired web and app projects. Don’t miss the chance, contact us today to get your best MEAN development team and launch the web or app product in the shortest time!

Reach new business objectives with a dedicated team of professionals.

What is a Full-Stack Developer? Key Skills, Role, and Responsibilities

What is a Full-Stack Developer? Key Skills, Role, and Responsibilities

Pros and Cons of Flutter Development

How to Write a Software Development Project Plan?