The Most Advanced AR Development Tools in 2023

The augmented reality technology has come to stay and change the way we interact with the environment that surrounds us. Adding digitally generated objects to the real-life environment via smart devices can potentially transform every industry, from education and healthcare to entertainment and gaming.

If you are working on joining the hype, you should know your way around what you need to make it happen. That is why we have prepared an overview of the best tools for augmented reality development. Without further ado, enjoy!

We can define several significant differences in the basic performance of most AR-based apps. Thus, some solutions focus on identifying graphic markers (like QR-codes or complex graphs), others process data received via GPS while the rest may combine both features. An emerging technology is a full-body motion tracking AR/VR solutions for those in the industries who require believable real world interactions inside their virtual world environments. 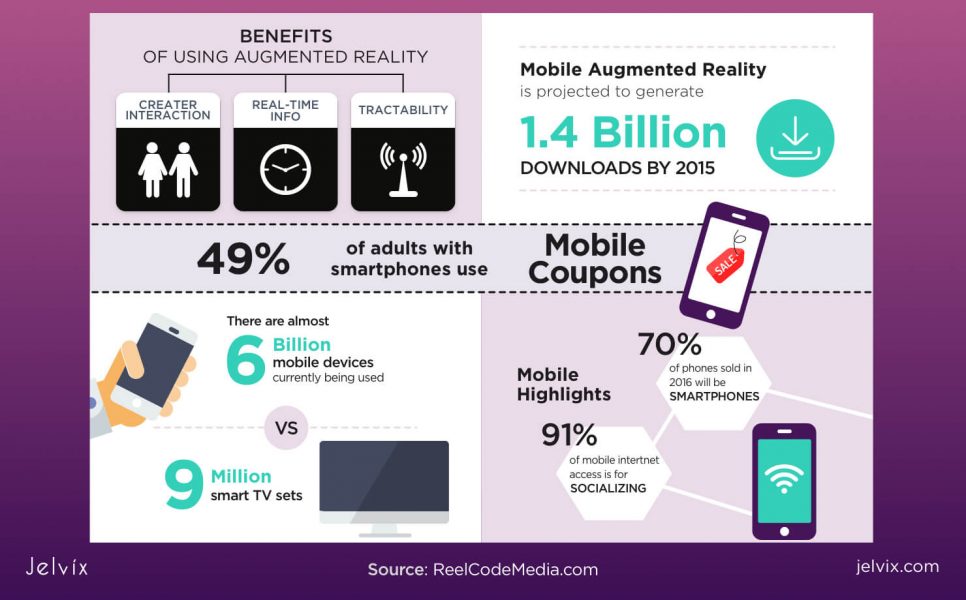 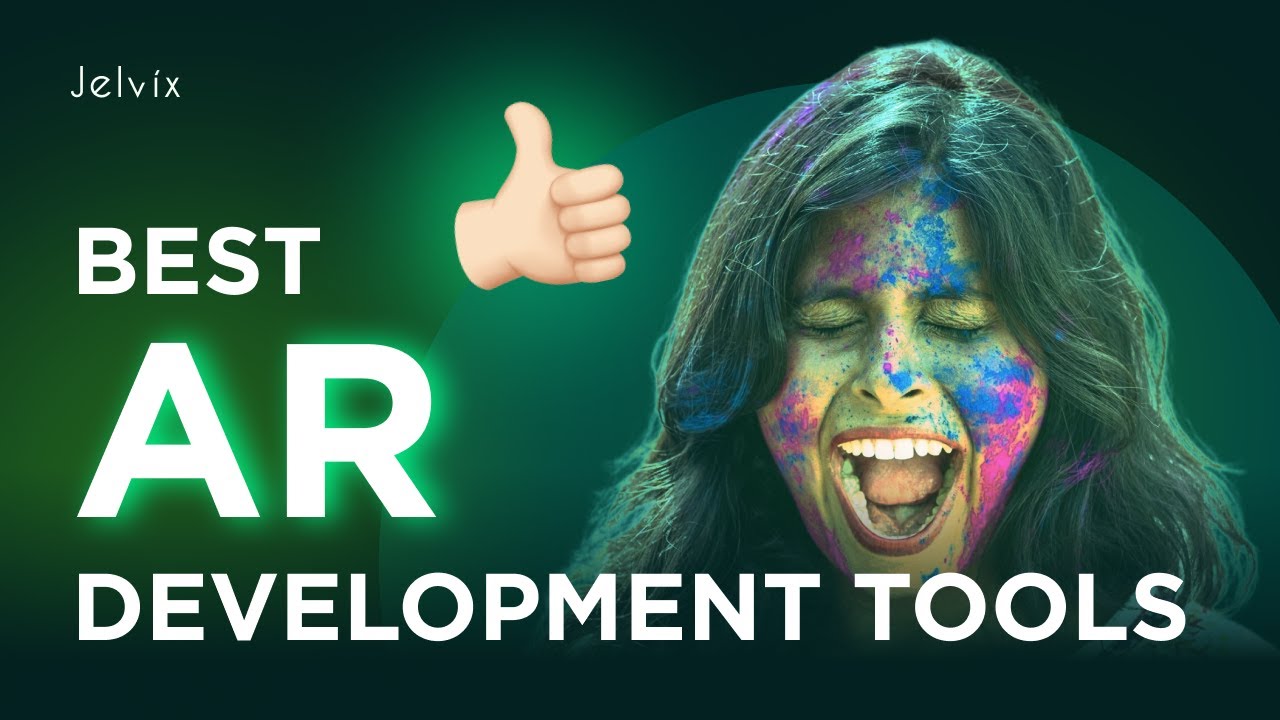 If you have already been searching for the appropriate tool for your project, you may feel lost in the sea of various SDKs out there. The choice isn’t that easy, indeed, but we are here to help you make a wise decision.

Of course, we are going to start with perhaps one of the most popular AR frameworks. This SDK for AR app development framework was introduced by renowned Qualcomm – a company that used to initially specialize in the research and development of the wireless means of communication as well as SoC electronic microchips.

In the core of the platform lies a QCAR library written in C++, which contains targets (image cube, cuboid, cylinder, word targets, and frame markers) and image rendering features. Targets in Vuforia are, basically, real objects, recognizing which, your application can array virtual objects in the needed locations and corresponding proportions.

Vuforia also features Extended Tracking (when the object remains captured even after it leaves the frame, which provides capabilities for implementing apps with augmented reality that factually surrounds the user) and Smart Terrain.

Solutions created with Vuforia are supported by:

Even though you can use it for free, this option is good only for hobbyists, because it comes with limited functionality and watermarks. The main features that Vuforia offers developers include:

Pricing: free + paid subscription plans (Classic – $499 per time, Cloud – $99 per month, Pro for commercial use, the pricing is individual)

The list of the top augmented reality SDKs wouldn’t be objective without Wikitude. Thus, Wikitude is another extensively popular framework for creating AR-based apps, which was first launched back in 2008 by an Australian software development company.

This SDK is constantly improved upon and updated – the latest Wikitude SDK 9.12.0 was released in July 2022. Up-to-date Wikitude features an array of built-in capabilities (including various rendering features) and is quite accessible as a whole.

The platform is quite flexible so that developers can create customized solutions and render objects via third-party tools while still working on it. For that, however, one has to write a piece of JS code with the help of Wikitude JS SDK or Wikitude Native SDK.

As a matter of fact, with Wikitude, you get a full-blown online studio for arraying static augmented reality objects. All that you need to employ rendering is upload an image to the studio, add AR objects, generate JS code, and paste it into the project.

Wikitude is supported by all major platforms:

If you use Wikitude to develop your application, you can:

Pricing: a free trial with watermarks + paid subscription plans (starting from €1,990 per one app)

ARKit is a package of profiled tools first introduced during the WWDC 2017 event. It offers a principally new approach to augmented reality technology. In particular, the solution is capable of identifying dimensions of the surrounding and consider lighting conditions to integrate virtual objects with real life as seamlessly as possible.

Moreover, it supports Arkit Unity and has a unique feature: there is no need to connect any additional directional markers like iBeacon for orientation and routing in this SDK.

As you may know, this toolkit for augmented reality development was created and launched specifically for creating mobile software for the iOS platform by Apple. This means you can create apps only for iPhones and iPads with this SDK, so it may be your best augmented reality SDK if you aim to make an AR exclusively for these devices.

ARKit is compatible only with Apple platforms:

Let’s take a look at its main features:

A 3D model created via ARCore can react to the changes in the lighting volume and even generate shades. Smartphone movements don’t affect the situation of the model in space in any way. A proprietary camera is used to define the parameters of physical objects and horizontal surfaces. In such a manner, created objects are being automatically ‘attached’ to tabletops, floors, and other environmental surfaces.

ARCore is supported by the following platforms:

MaxST AR SDK is yet another powerful framework for mobile software developers that increasingly grows in popularity. It is based on five major components:

MaxST is compatible with platforms, such as: 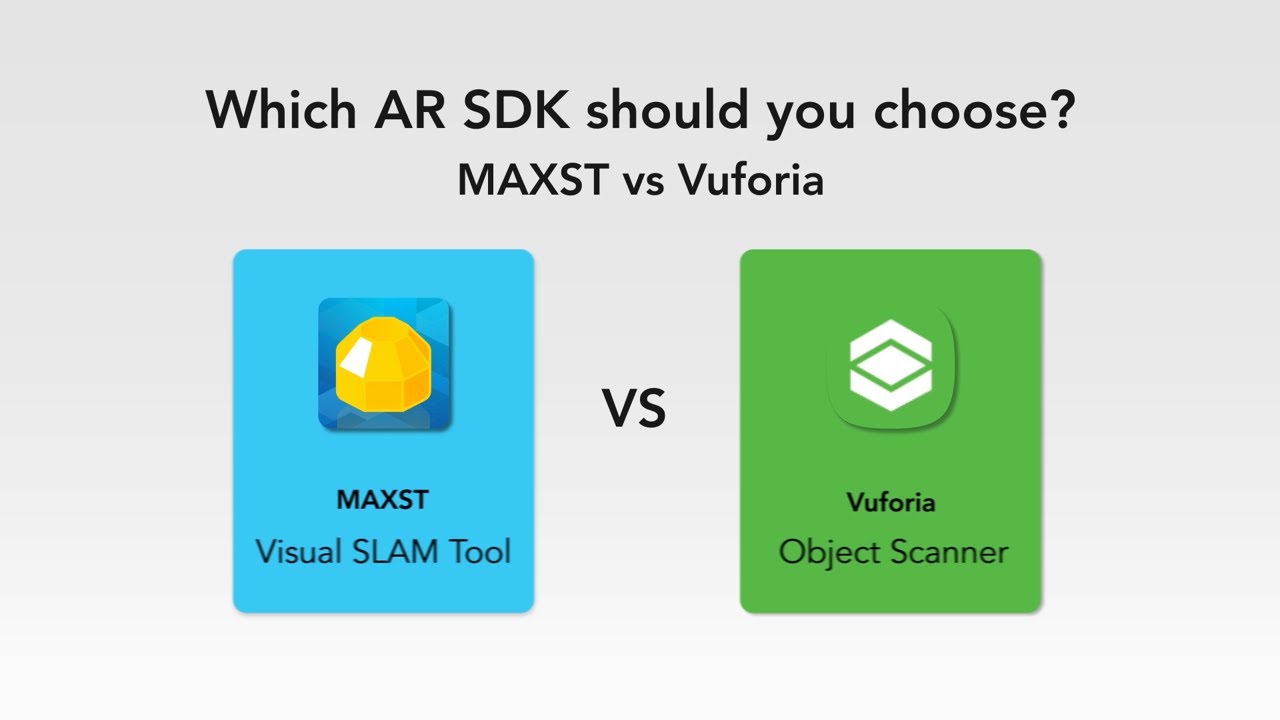 MaxST comes in two different SDKs: one is the 2D toolkit used for tracking images, and the other one is the 3D toolkit created for scanning and recognizing the surrounding environment. The latter one is more interesting for us in terms of the topic, so let’s take a look at its key features:

EasyAR is an Asian solution for creating AR apps that is heavily underappreciated by most developers. As opposed to many other tools, the solution doesn’t feature a built-in object manager. Instead, objects are identified by recreating initially predefined 3D models. Targets are generated in runtime.

Working with EasyAR, you will have to write more code than in case of most other tools, as well as go through project formatting in Unity in a bit different way. However, all this allows for building utterly flexible solutions. The only significant con of this tool is that there is no accessible documentation and tutorials on it.

The tool enables developers to:

Kudan is a SLAM tool from Chinese creators, which is similar in many features to Vuforia, being its direct competitor. On the other hand, it supports only two major platforms: iOS and Android. This can limit the developer’s capabilities to some extent. Using SLAM technology, Kudan allows recognizing simple images and 3D objects, providing simple database generation in the Unity editor.

Kudan-based solutions will be supported only by:

Kudan is quite interesting in terms of functionality, featuring:

Pricing: there is a free version for testing apps and license priced at $1,230.

ARToolKit is a package of open-source libraries for developing augmented reality apps based on marker recognition. This is an offspring of DAQRI and quite a popular tool that has loads of corresponding tutorials on YouTube.

The main principle of ARToolKit’s performance is that it processes graphic data received from the mobile camera in the runtime mode guided by the initially known square object markers. After that, the objects are displayed on the smartphone screen with the consideration of their location in space.

With ARToolKit, you can create solutions for the following platforms:

Even though this is a well-thought-out solution for beginners (it doesn’t have well-thought-out documentation with good use cases as of yet, though), its functionality is pretty impressive even for experienced AR software creators:

Select a corresponding version of this tool for your particular platform.

ARmedia is a cross-platform framework for developing software based on 3D model tracking that’s available in both freeware and paid versions. ARMedia is a product by Italian creators which isn’t that popular among wide audiences yet (which doesn’t make it worse than any existing option, though).

As for the capabilities, the tool can identify not only flat images but also complex three-dimensional ones. Thus, ARmedia efficiently handles even large objects with a complex geometrical form.

ARMedia is compatible with the following platforms:

All in all, this is a very efficient tool that just isn’t as promoted as Vuforia or Wikitude as of yet.

Pricing: there are both freeware and paid versions (the paid costs 249 Euros).

This is the last but not the least SDK on our list of the best tools for AR development. The DeepAR company was established in 2015 in the UK. Up to date, its main solution is widely known in the AR developer community. DeepAR can be considered a perfect solution for creating three-dimensional face masks and lenses (e.g., for Snapchat). It also features a patented motion face tracking algorithm and supports unique FX solutions.

DeepAR is compatible with platforms, such as:

Among the major features of DeepAR are:

Pricing: the exact price can be requested.

Are you confused about which AR SDK to choose? Fear not – we have prepared a comparison chart with all the main things you may need to know about the best tools for AR development to make your choice. Take a look: 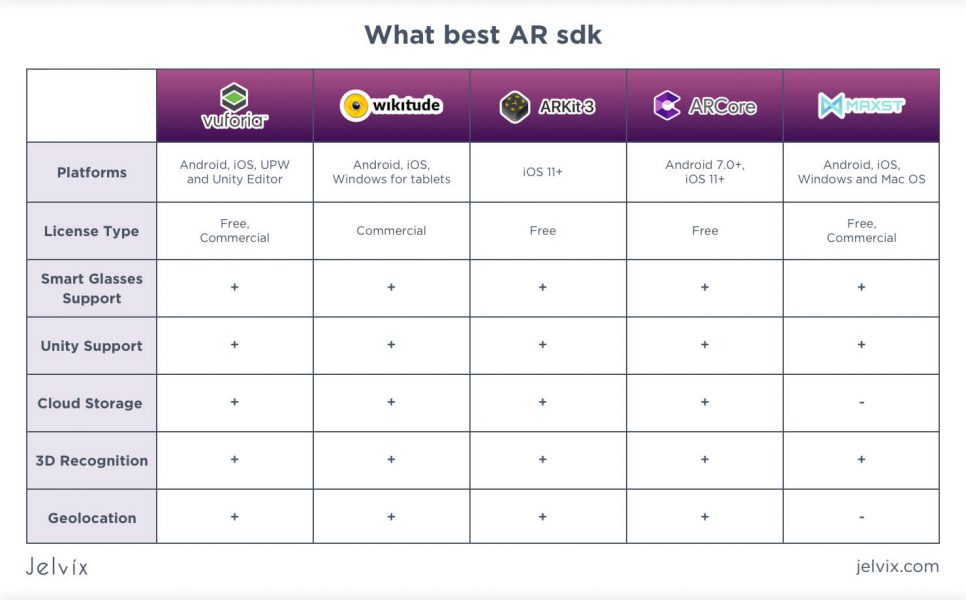 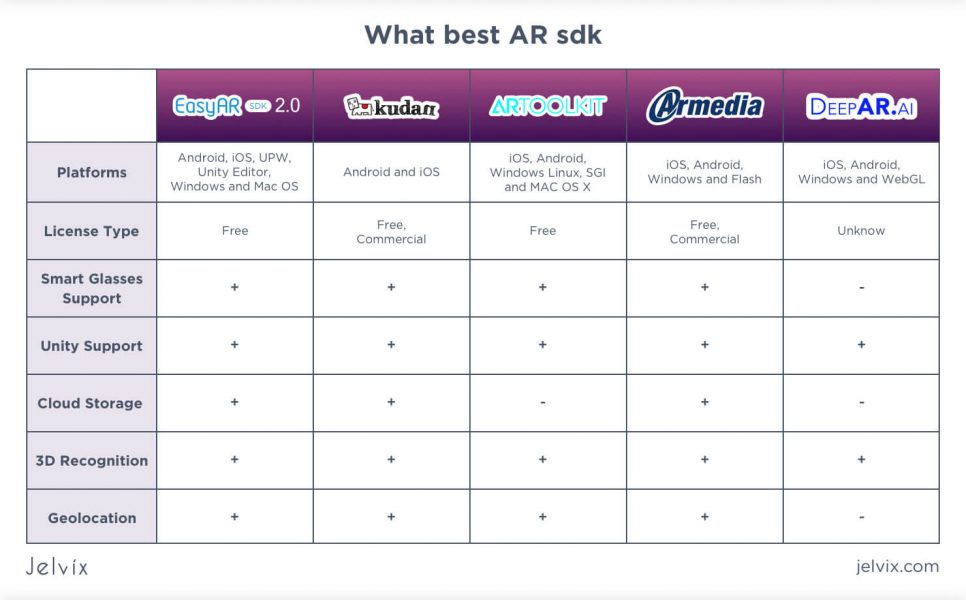 If you are still uncertain how to choose the AR toolkit that would be the perfect fit for developing your app, we suggest you turning to professionals for advice. Do you have the idea that will blow people’s minds? Reach out to us to make the first step towards your success.

The Future of Machine Learning