If you are considering building software for PC or a cross-platform software, you most likely have heard of ASP.NET vs ASP.NET Core. Both derive from .NET, a Microsoft-built framework compatible with C# and C++, but also with other less popular languages like F# and VB.NET. 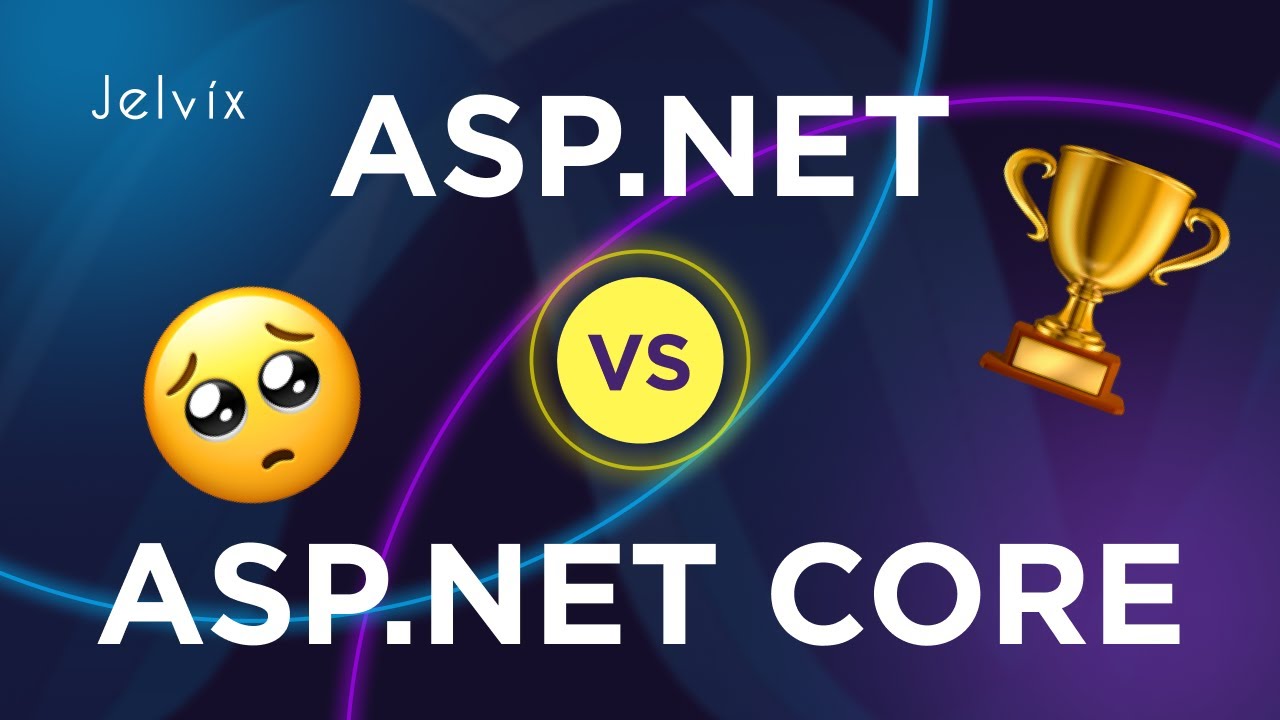 The framework is available both under a Microsoft license and open-source. It used to be exclusive to PC development only but lately became applicable to OS as well. The reason for using .NET is in its simplicity. You can quickly comply with the outfit, use library components, and manage framework classes. 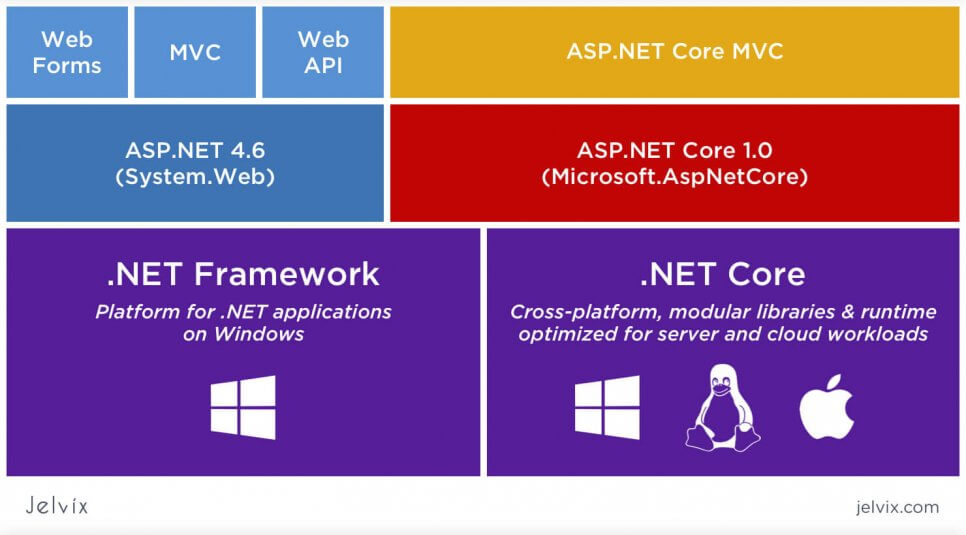 However, while .NET makes the development process simpler, graphing multiple concepts behind the infrastructure is challenging for many developers. This is especially true for distinguishing between ASP.NET and ASP.NET Core.

Clearing Out Some Common Misunderstanding

You already know what .NET is and understand its purpose. However, we still need to clarify the ASP part. Active Service Page is basically an HTML page that runs based on scripts and is used to build web applications.

Active Service Pages can be previewed from any browsers, including mobile versions. ASPs are typically used for the backend of a web application. They are used to connect inputs and outputs reserved on client and server sides. 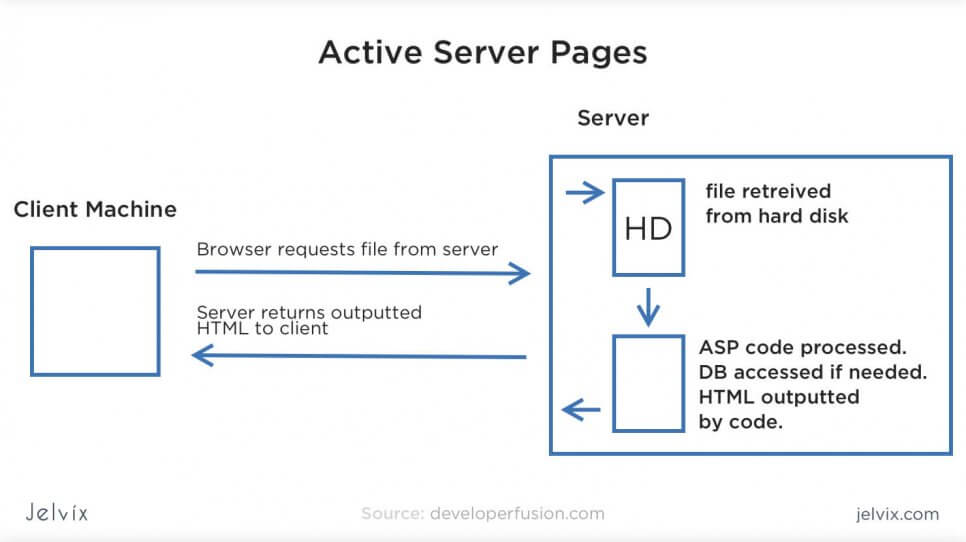 What are the Benefits of Building Web Apps as an ASP.NET?

Another question here might be what’s the reason for using a framework for C#-based backend development? What are the advantages that specifically .NET delivers?

.NET just does what all good development frameworks are supposed to do. It provides developers with a ready-to-use application architecture, libraries with patterns and page templates, ready web app functionality (like authentication, access control, page display, etc.)

How do ASP.NET Core vs ASP.NET Relate?

You already understand the distinction between .NET and ASP.NET. Just to recap:

ASP.NET is a framework that has the same functionality as .NET, only it’s adapted to writing backend for web pages and web apps.

However, it’s not the only distinction in the .NET ecosystem. ASP.NET is only one of the versions of the framework. Another one is called ASP.NET Core.

Are ASP.NET and ASP.NET Core the Same?

ASP.NET was the first version of the web-adapted .NET framework. ASK.NET Core is an improved version with richer functionality, a more comfortable interface, new libraries, and other distinctions. We’ll talk about their side-by-side comparison just in a minute, but here are the key points for now:

So, ASP.NET Core is a newer, more comfortable version of ASP.NET. Microsoft’s team understood what things could be improved in regards to user experience and improved the functionality.

Are .NET Core and .NET Framework the Same?

Similarly, as ASP.NET was broken down into a traditional .NET version and a newer Core edition, a classical .NET framework underwent the same transformation. This is why now developers see demand for two tools – .NET Core and .NET Framework.

What is the difference between the two?

.NET framework has been on the market longer, which is why it has a lot more elaborate ecosystem. It’s not just about patches, library updates, and guides – even in the job market .NET framework skills are still highly regarded, even though it technically isn’t the newest version.

So, many teams prefer to work with .NET if they are supporting tools developed before introducing the Core. Another common scenario is when a team used to .NET doesn’t want to spend time on learning Core functionality because they need to meet deadlines fast.

The issue with .NET Framework: the latest version of .NET framework is 4.8. and there will not be a new one. Sooner or later, you will have to migrate to the Core version – there isn’t much doubt about it.

If you are starting a new project and assembling a team from scratch, we definitely recommend going for a newer, core version. For one thing, it’s indeed improved. Developers who migrate from the .NET version to the Core all agree that the interface became a lot better. Even though getting used to the new feel takes some time, it’s definitely worth the struggle.

Also, though .NET is still highly demanded on the market, the situation will shift for sure soon. Microsoft might discontinue the support of all versions altogether. It’s definitely better to be moving in sync with the official updates, which means using the Core version.

The issue with the .NET Core: although this version will definitely soon become dominant on the market, it’s not the case yet. For now, the ecosystem is poorer, there are not that many educational resources, open-source add-ons, and recruiting an experienced .NET Core developer is a challenge.

So, across this comparison, we mentioned multiple times that Core is an updated version of the network, which is supposedly better. To see if that’s really the case, let’s zoom in on both frameworks’ technical characteristics.

A platform for developing desktop, web, and cross-platform applications. The first version of the platform was published in 2002 and based on the .NET framework. The platform is based on HTTP protocol for requests and communication. 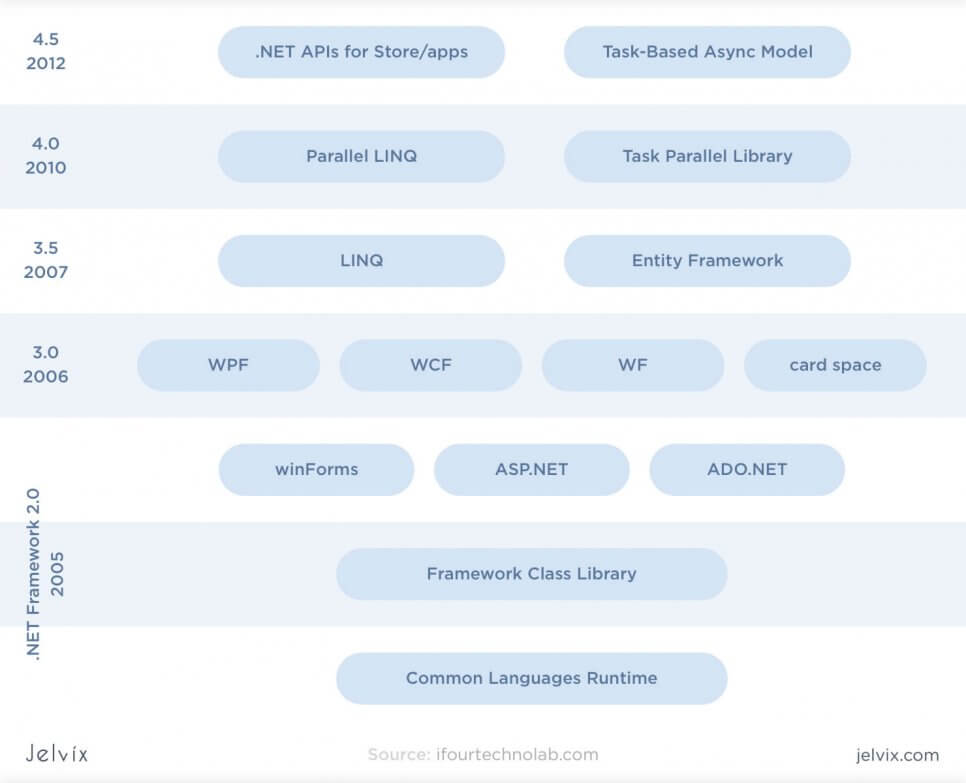 By combining these three development components, the team can easily write, preview, and manage all web application architecture components. On top of that, ASP.NET offers a variety of development styles. 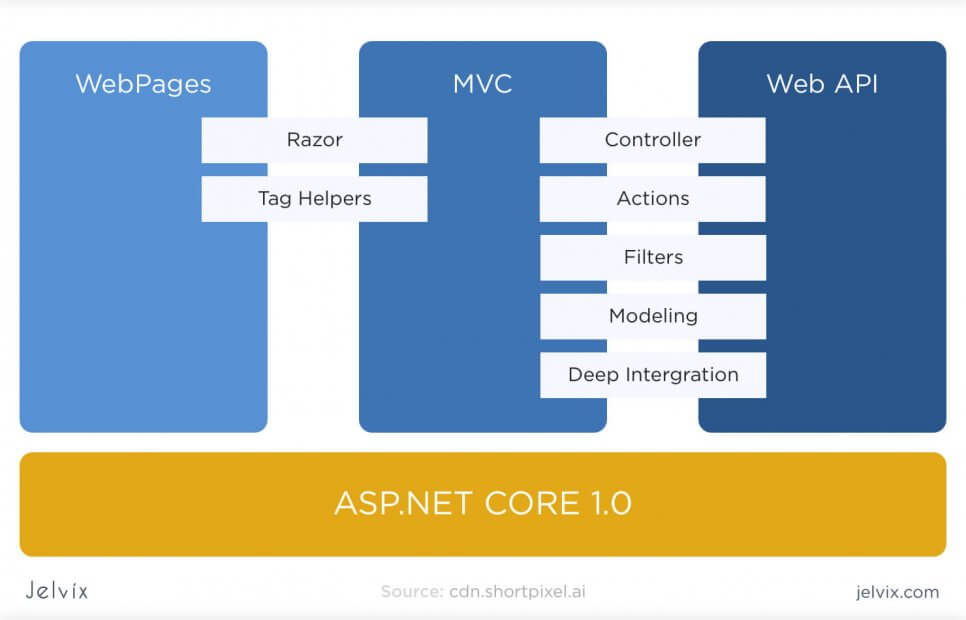 These three development models provide developers with a versatile stack for SPA, cross-platform, and PWA development. We like to combine all three to get full visibility.

ASP.NET Architecture and its Components:

ASP.NET is based on the .NET framework, which is why it shares most of its key components with .NET.

When ASP.NET just appeared, it impressed .NET developers with multiple useful benefits – now, however, they sound somewhat less promising, because Core inherited most of them. Still, let’s take a look at the main positive aspects of .NET as they will also help us understand Core’s functionality better.

Overall, ASP.NET provides a lot of great features for code editing, management, and monitoring. It connects the backend of the application to other components, giving developers a full idea of their app’s functionality and interface. 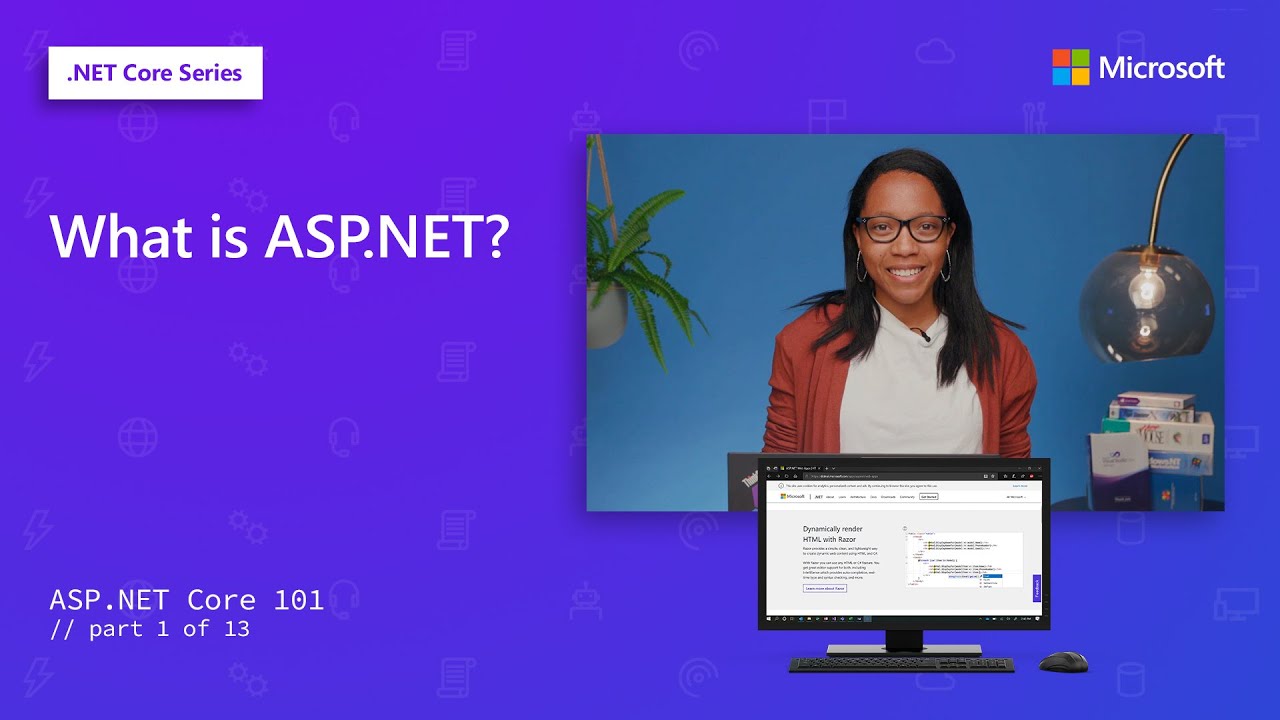 Just like we reviewed ASP.NET, let’s take a look at the Core’s architecture, components, development styles, and benefits.

ASP Core is a new version of ASP that became available open-source and can be executed not only on Windows but also on Linux and Mac. With this update, ASP.NET became increasingly more available to teams who usually work outside of the Microsoft ecosystem.

ASP.NET Core is a Cloud platform where teams can build web and cross-platform apps from any OS. This version is a combination of Model-View Controller and WEB API within a unified development system.

With ASP Core’s MVC, users can do model binding and validation for their requests, automatically establishing parameters and converting values. Additionally, the framework supports filtering that automatically detects invalid models and blocks them for future sessions.

What used to be “References” in ASP.NET, became a Dependencies folder in ASP.NET Core. Right as you start creating the application, the platform demonstrates all default dependencies and allows you to track their increase or decrease. 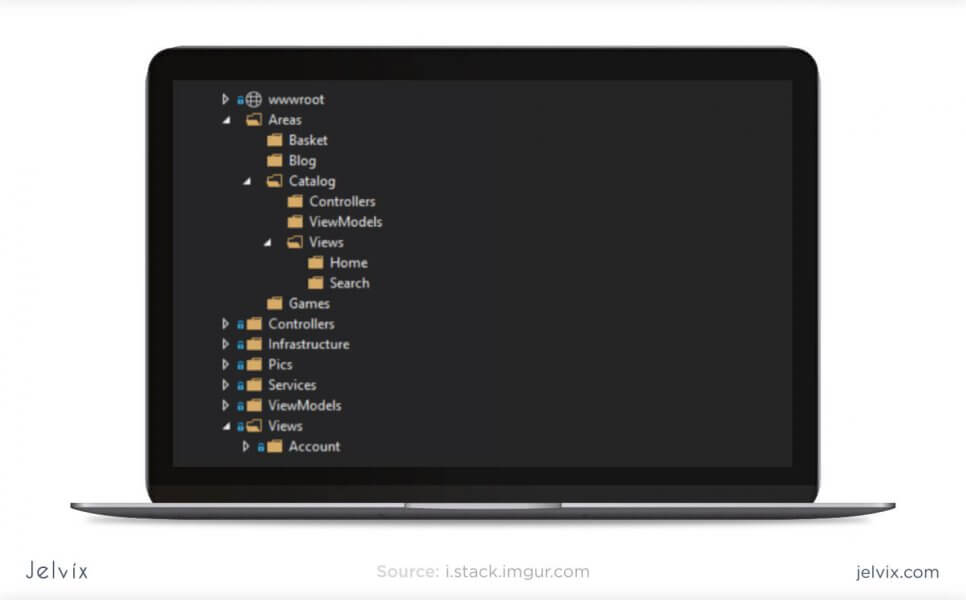 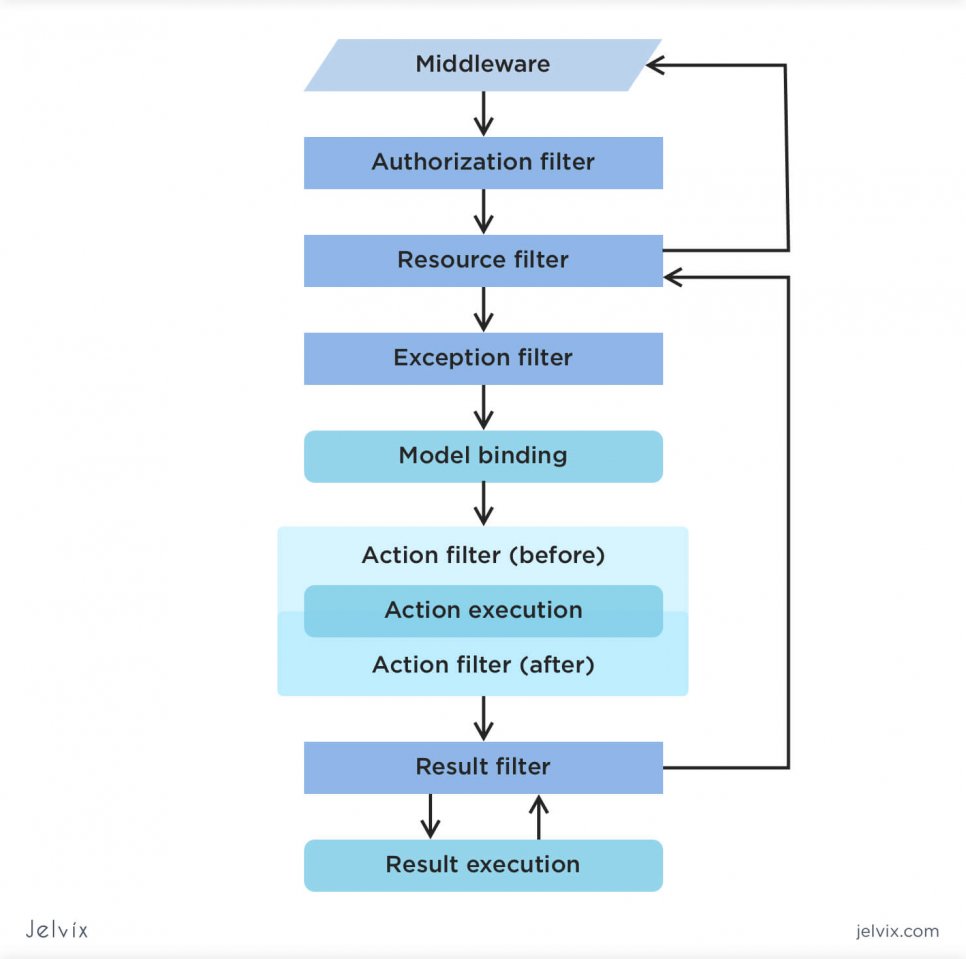 ASP.NET Core offers multiple other updates at the levels of security, token-based authentication, client communication, update control. Most importantly, this additional functionality is very well structured in the application – it’s obvious that the team focused on minimizing dependencies. You can isolate components and make standalone changes across the entire codebase.

Lastly, ASP.NET Core can be hosted in Docker, HTTP.sys, Apache, Kestrel, IIS, Nginx, and other systems. It’s a great option for Cloud and microservices development, especially well-suited for enterprise-level projects. 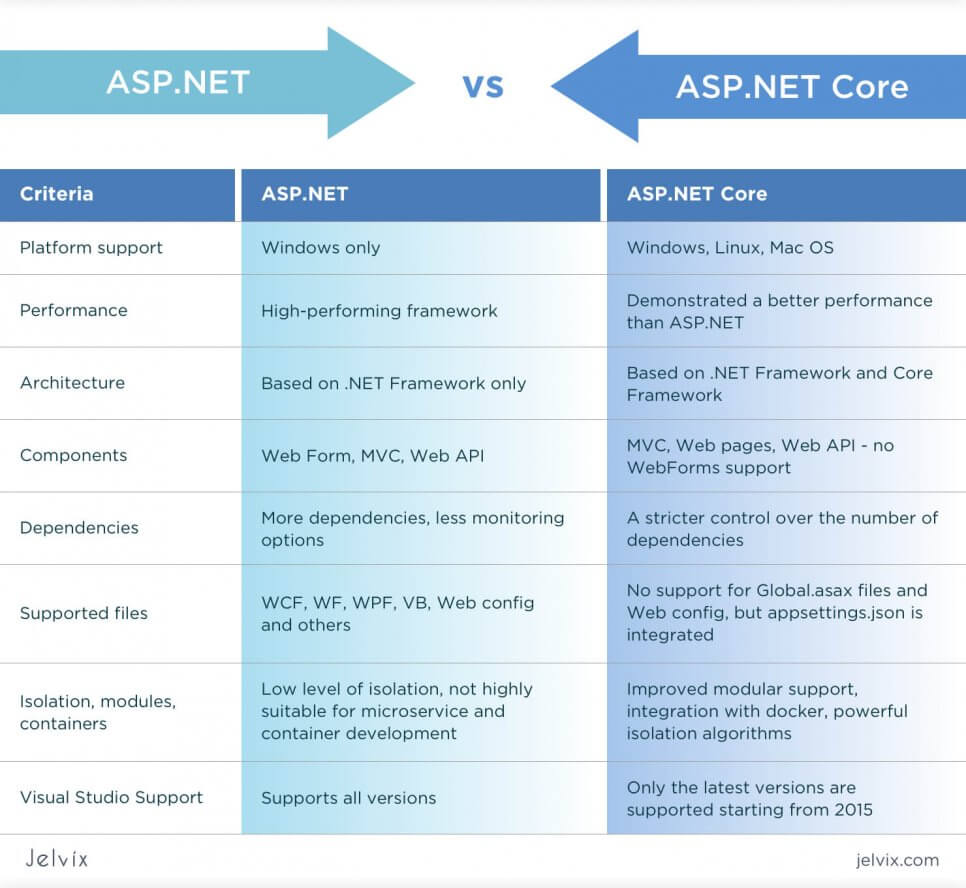 Overall, the major advantage of ASP.NET vs ASP.NET Core is the maturity of the ecosystem. It supports more plugins, has more powerful integration, and can be opened in old versions of Microsoft Visual Studio. On the other hand, this edition will likely get discontinued eventually, considering that it’s an outdated version of the platform.

.NET Core, on the other hand, stands out with its improved interface and compatibility for Windows, macOS, Linux, but it still lacks maturity in terms of the ecosystem.

Let’s recap the main advantages and disadvantages of both versions before committing to a final option.

What is the difference between ASP.NET and ASP.NET Core? 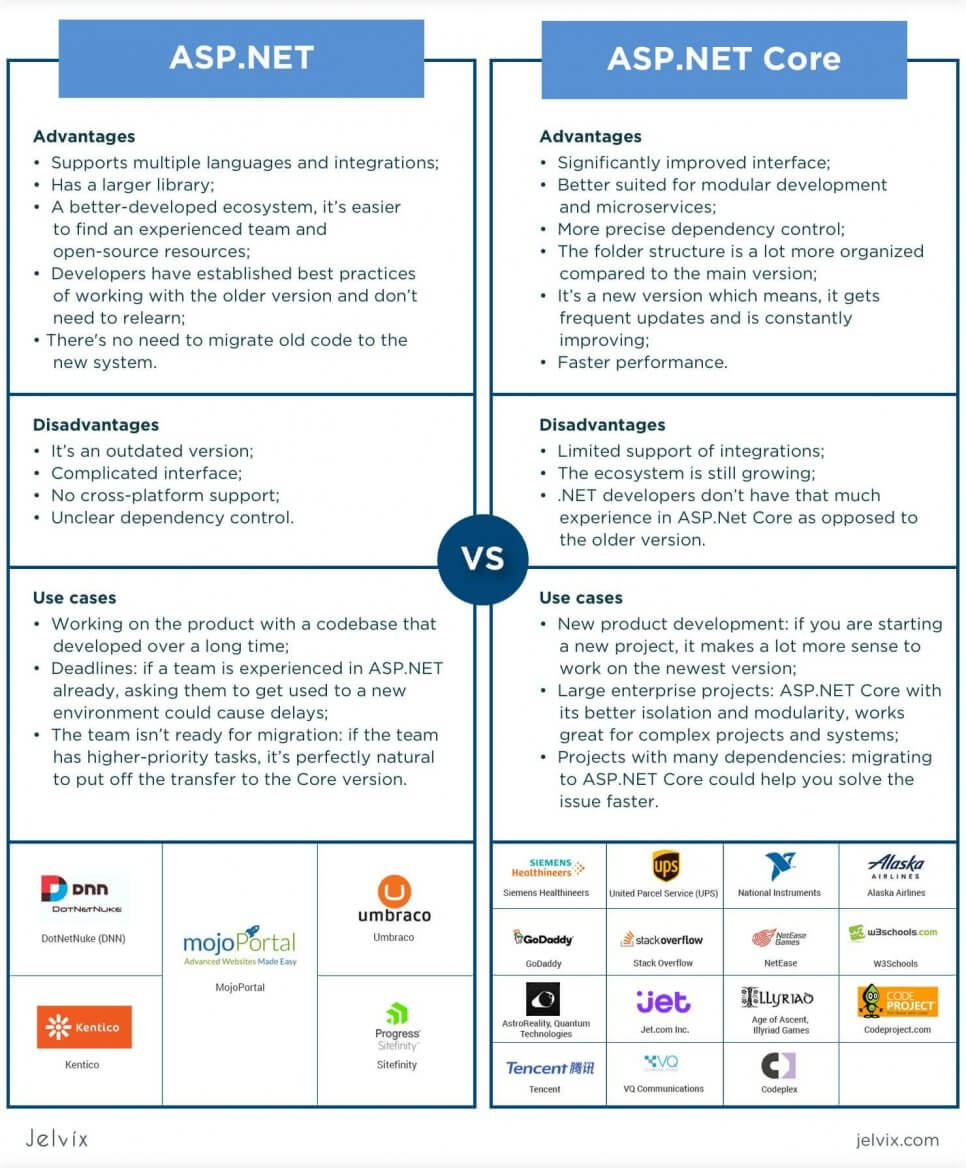 Teams who migrate from ASP.NET to ASP.NET Core need to go through the following stages:

To start the migration, you need to have a NET.Core SDK, Visual Studio (at least 2019 version), and an ASP.NET project.

Although both ASP.NET Core vs ASP.NET MVC feature an MVC, they approach it differently. The MVC will be automatically transferred to the new project, but you still need to re-register it. Here’s the list of commands that are used to upload all the MVC file to the Core.

You need to check end-points to see if application content and styles were moved correctly. The official documentation recommends rendering transferred views to the browser to check their correct display.

ASP.NET MVC vs ASP.NET Core store static files in different directories. In the first version, files were stored together with server-side content, whereas in the Core version, static files aren’t mixed with other backend content anymore.

So, you need to change a directory from wwwroot to ASP.NET Core WebApp1 projects.

For now, ASP.NET Core doesn’t support built-in bundling configuration. However, Microsoft documentation suggests using open-source plugins like WebOptimizer. If your project shows 500 errors (that’s another common consequence of the move), you can integrate a UseDeveloperExceptionPage to the ASP.NET Core. 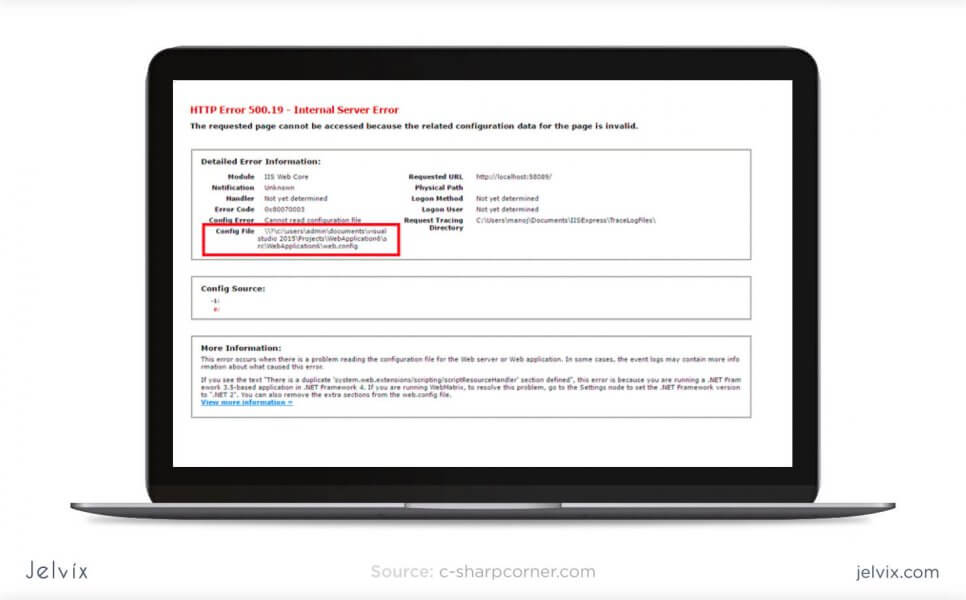 The best practice is to use ASP.NET Core, since it’s a new version that presents more opportunities to the team. Migrating to ASP Core form ASP.NET is a long-term investment – this way, the team is in sync with official Microsoft’s updates and can benefit from continuous improvements.

While there are use cases for remaining on ASP.NET, it’s generally not a good idea. You’ll be setting your business back and cutting the team off from official resources. It’s better not to wait till ASP.NET becomes entirely outdated and possibly discontinued. Instead, show an active approach and start migration.

Offshore Development Center: Point of View from the Specialists

What is C# Used for?

How We Are Choosing Between Xamarin.Forms vs Xamarin Native