CEO vs. President: How they differ

CEOs and Presidents are some of the most influential people you will find in a company. No matter what industry you are looking at, all businesses will have people working in such roles and making some of the most high-profile decisions in these companies.

Obviously, many young specialists aspire to become important executives in their industry someday. First, however, it’s essential to understand the differences between the CEO and the President positions and what these two roles entail. Hence, here’s a comprehensive guide to CEO and President titles.

This article will uncover the differences between these two major positions, their company roles, and, of course, their responsibilities. 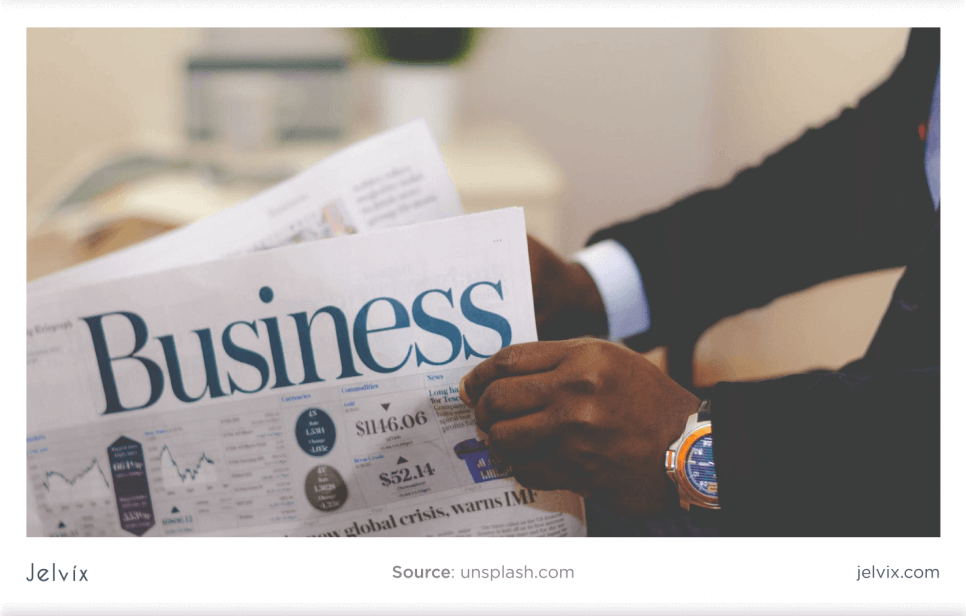 Who Is A President?

The President of a company is one of the highest roles in any business. However, if the company also has a CEO, the President will likely be second in command rather than the person in the highest position. Depending on the size, industry, and other characteristics of the company, the President can have slightly different functions and responsibilities.

Some companies have a President who also acts as either a CEO (Chief Executive Officer) or a COO (Chief Operating Officer). All of this is quite individual when it comes to different companies and largely depends on the internal organization or the corporate structure of the business. The latter option (one person performing both the role of the President and the role of the COO) is more common. 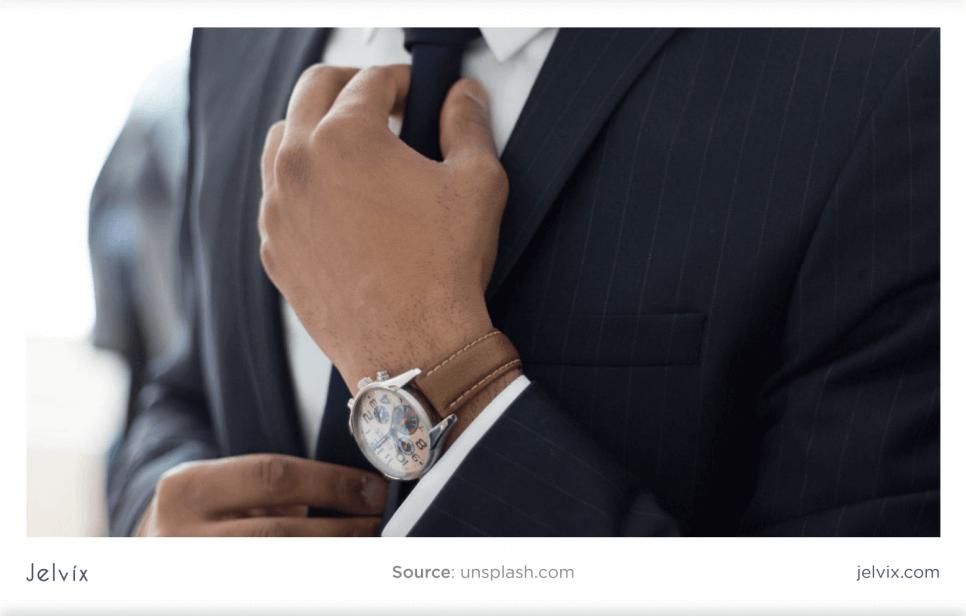 More often than not, the President of a company will be responsible for various business operations, logistics, and the like. They can also be given the task of ensuring that all the company policies are implemented correctly and effectively. If they are also performing the role of the COO, they will also be responsible for the day-to-day operations within the company.

Both Presidents and COOs often work together with the CEO, operating as a right-hand man to the Chief Executive Officer. The CEO is the one with the vision, while the President and/or COO implements this vision and oversees all the underlying processes. The CEO can also appoint additional tasks that the President or the COO must perform along with the ones they already have.

Interestingly, a company can have not one but several Presidents. This usually happens in bigger companies that have large departments. In such cases, a President will lead a single department, so each of these parts of the company will need its own President. Presidents can also have Vice Presidents appointed for their specific departments.

The structure in non-profit organizations can be even more peculiar. Depending on their size, non-profits might not even need a President (or a CEO, for that matter). Alternatively, the person performing similar tasks could simply have a different title (e.g., Executive Director). That being said, bigger non-profit organizations still tend to have either a CEO or a President (or even both).

There have been cases when a company doesn’t have a CEO but still has a President. In such instances, the President holds the highest position in the company and thus acts similarly to a CEO. There’s simply nobody above him. 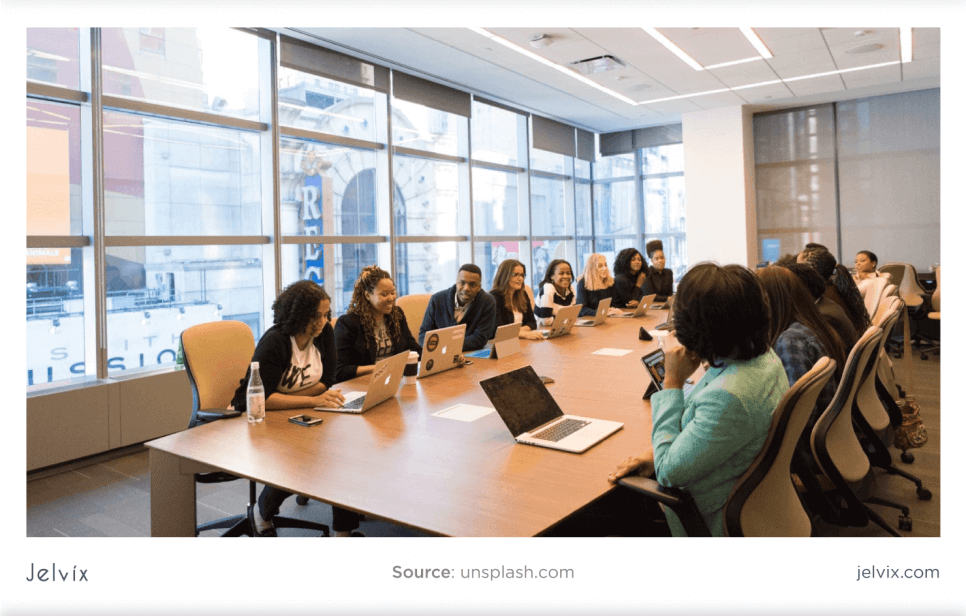 Though the President’s actual responsibilities can vary from company to company, there are still some general tasks that are commonly associated with the role of the President, including:

The President takes the CEO’s vision and implements it in practice. In addition to that, they also take the company strategy and help execute it with the help of different departments in the company. This involves setting goals and tasks for each department separately and consulting the Board of Directors to execute their vision as well.

Because the President is the one managing even the day-to-day tasks within the company, he or she also leads department heads and managers in guiding their teams.

Giving Recommendations and Feedback to the Board of Directors.

Managing and Keeping Track of Budgeting and Finances.

By taking into account the company’s business strategy and goals, the President manages and keeps track of all the budgeting and finances. They also have to ensure that each department stays within its budget limits.

The President also designs metrics to measure and analyze employee performance. Using this data, they see if the business goals they were tasked with have been achieved, and can create a more effective strategy for further actions. 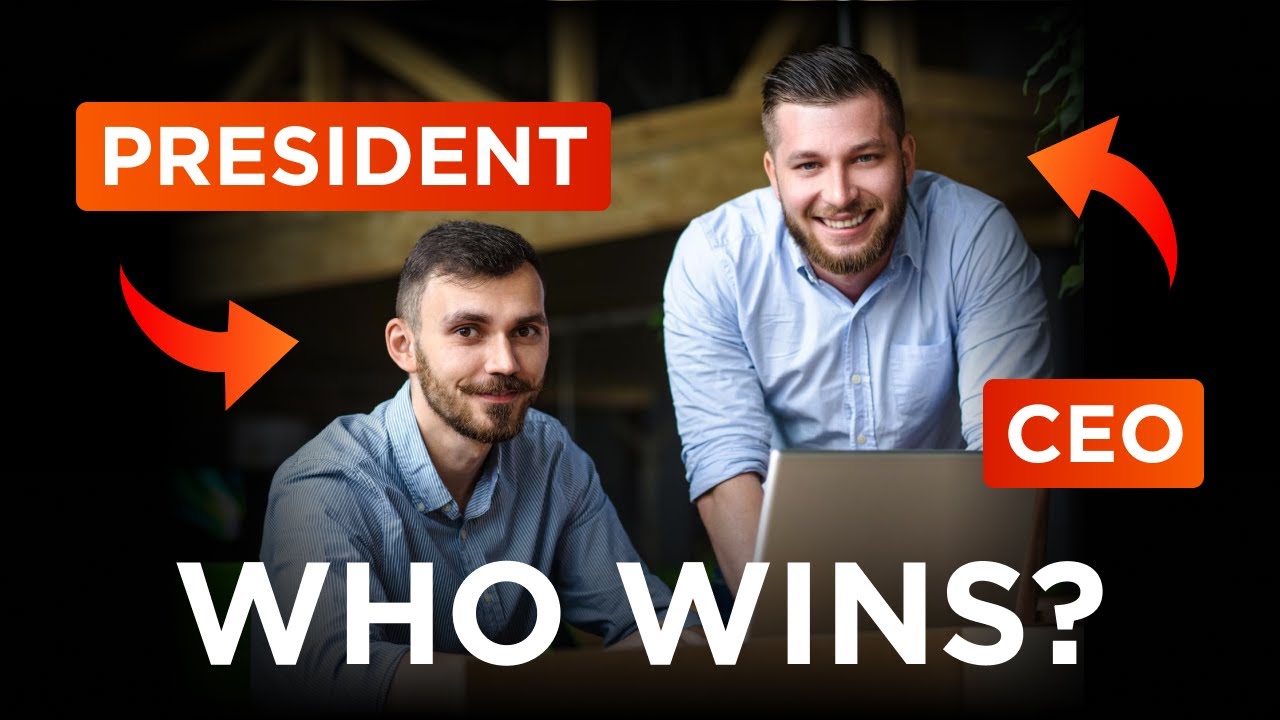 The CEO or the Chief Executive Officer is usually the highest-level position in the company. Most of the time, there is nobody else above the CEO, so they are the person making all of the biggest decisions. Even if a company also has a President, the CEO will be in command of the President, who will be the right-hand person to the CEO. 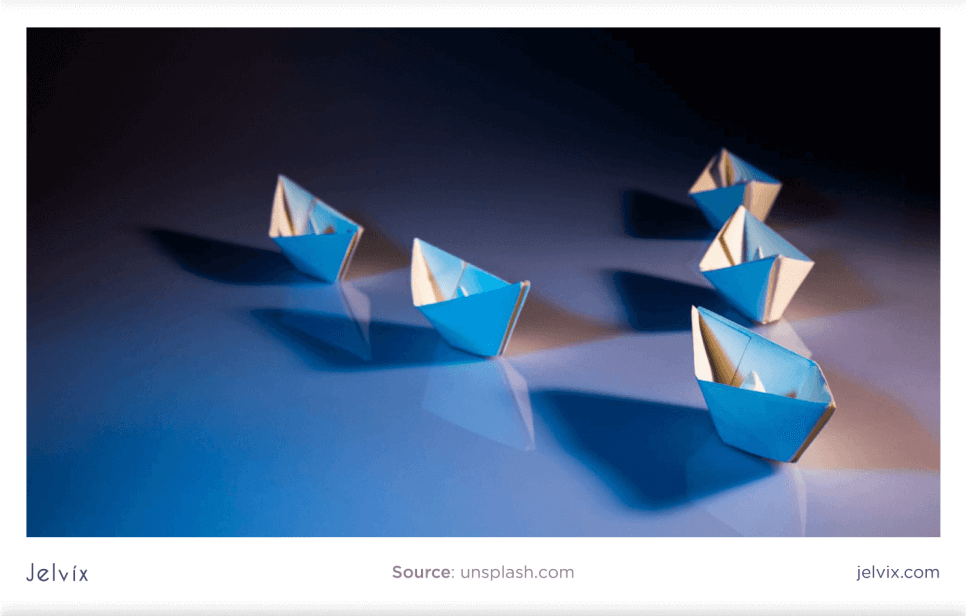 Much like with the role of the President, the CEO’s responsibilities can vary depending on the company’s size, type, industry, and so on. Apart from the CEO, a company can also have other C-suite executives, including:

While smaller companies might only have a CEO, larger ones tend to have at least a CEO, a COO, and a CFO. Though each of the C-suite executives has the highest-ranking positions in their respective spheres, they all have to report back to the CEO. The CEO, in turn, might have to report to the Board of Directors, though this depends on the company structure.

The CEO is the ultimate decision-maker in any given company. They have the authority to change the course of the entire brand and have to always look at the big picture first. They set up long-term goals and keep in mind such variables as shareholder interests to lead the company in the right direction. 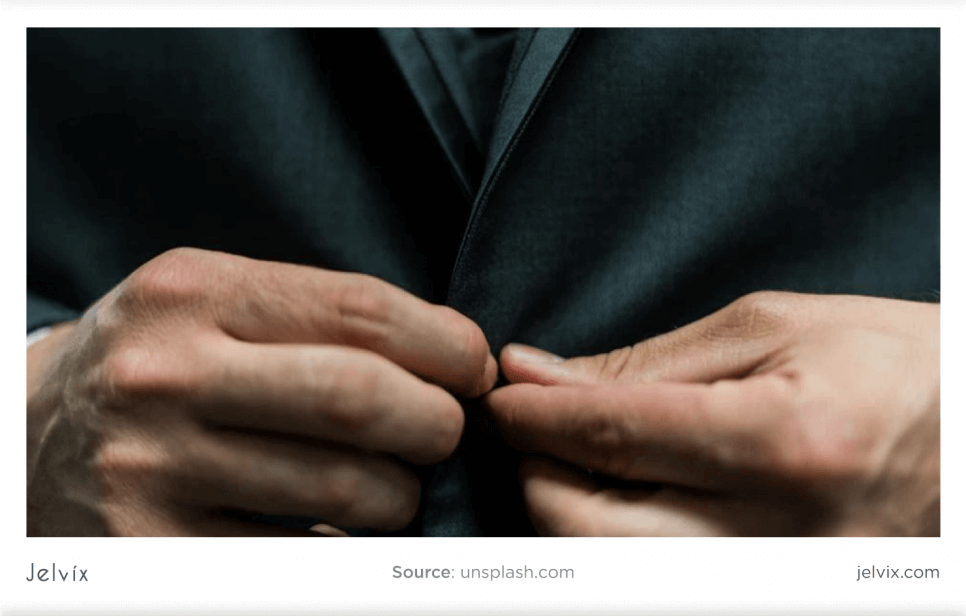 The CEO could be making decisions as big as the acquisition of smaller companies, so they definitely hold a lot of power in the company. While smaller details about their job may vary, CEOs usually have a particular set of responsibilities, including:

Determining the Company’s Strategy and Goals.

The CEO is the person who has some kind of vision for the company and thus determines the company’s strategy and goals. Usually, these are long-term goals, but they can also decide on some of the short-term goals.

The CEO also considers the company’s impact on its community and guides the company strategy to uphold a particular brand.

Because they set long-term goals for the company, the CEO also has to oversee the planning of future operations as well as the scope of these operations. This is when the CEO has to work both with the Board of Directors and with other executives.

Even after all of the planning is complete, the CEO still needs to make important decisions and changes that are usually final and are made at the highest level.

Working with and Advising the Board of Directors.

Developing the Company and Growing Its Value.

The CEO makes all the major decisions, so it’s their responsibility to develop the company and grow its value on the market. Moreover, they act as a public face and represent the brand to grow its value through its media image as well.

Comparison of CEO vs. President

As you can see, both the CEO and the President of a company are people working at the highest levels and making very important decisions for the overall performance of the company. If a company has both a CEO and a President, these two people will inevitably have to work together: the CEO has the vision, the President is the one executing it. 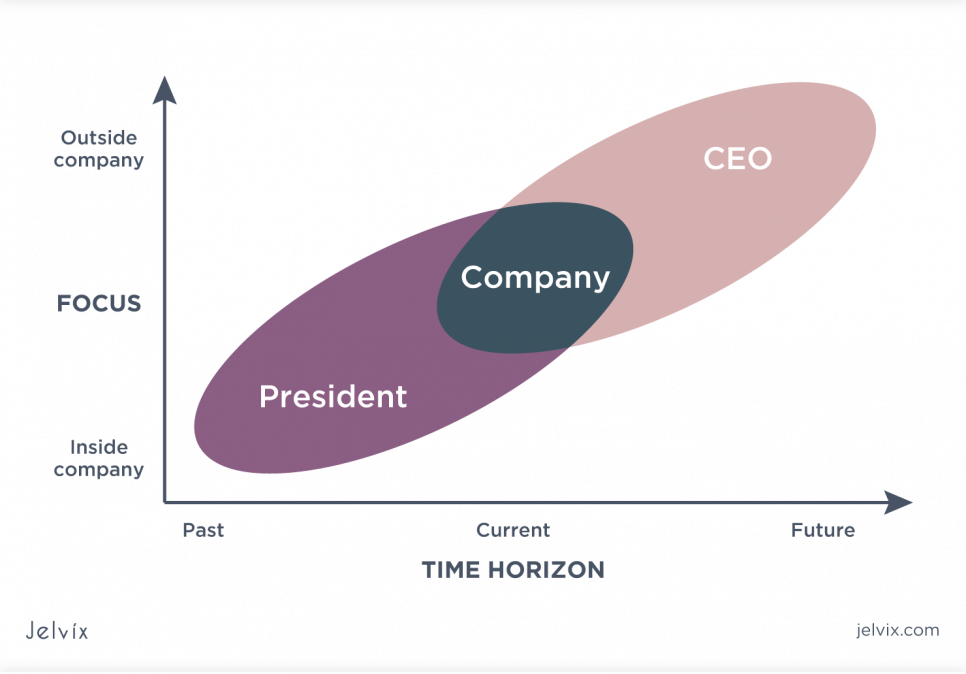 The corporate structure can impact the responsibilities of a CEO or a President. Moreover, in smaller companies, there might not even be a CEO or a President – or one person could be performing the responsibilities of both positions. There might not even be a Board of Directors in companies like these, so the CEO could be the top person who doesn’t report to anyone.

In some cases, the founder of the company could also be its CEO. This person could even be the owner of the company at the same time, so they will be performing all three roles together (founder, owner, and CEO).

If there is a Board of Directors, the CEO will likely be appointed by the Board, where these directors are actually the shareholders of the company. The Board can also hire other C-suite executives like the COO, the CFO, and the CIO.

It’s important to remember, however, that the founder or owner of a business does not automatically become its CEO or President, but they can still choose to take on the position if they feel that they can manage the responsibilities that come along with the role. Sometimes, being a CEO or a President can come under a different title, like Executive Director. 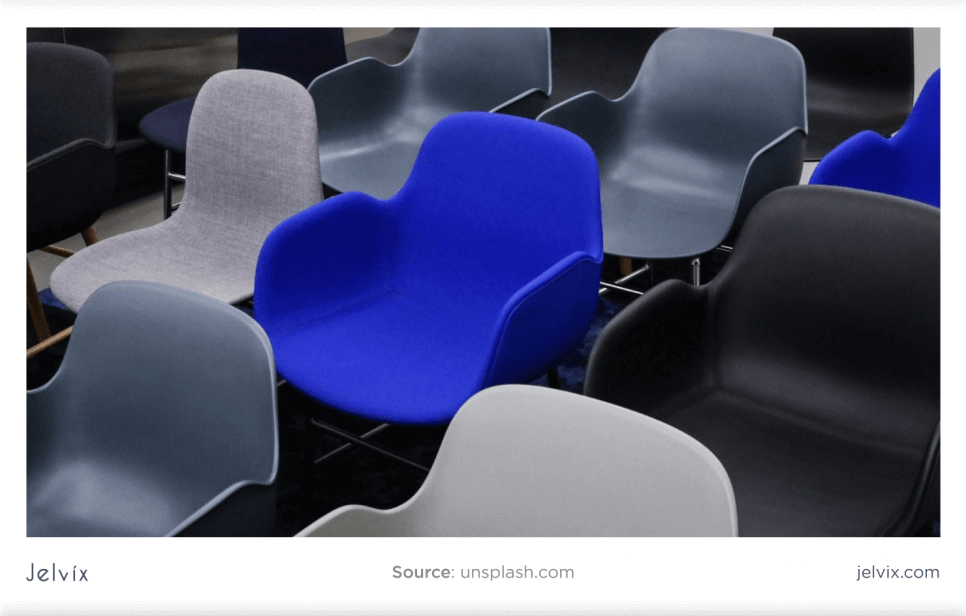 While neither a CEO nor a President might be working on such small tasks as improving email marketing or the like, they still have vastly different responsibilities working at the highest level. Here are the biggest differences between the two titles: 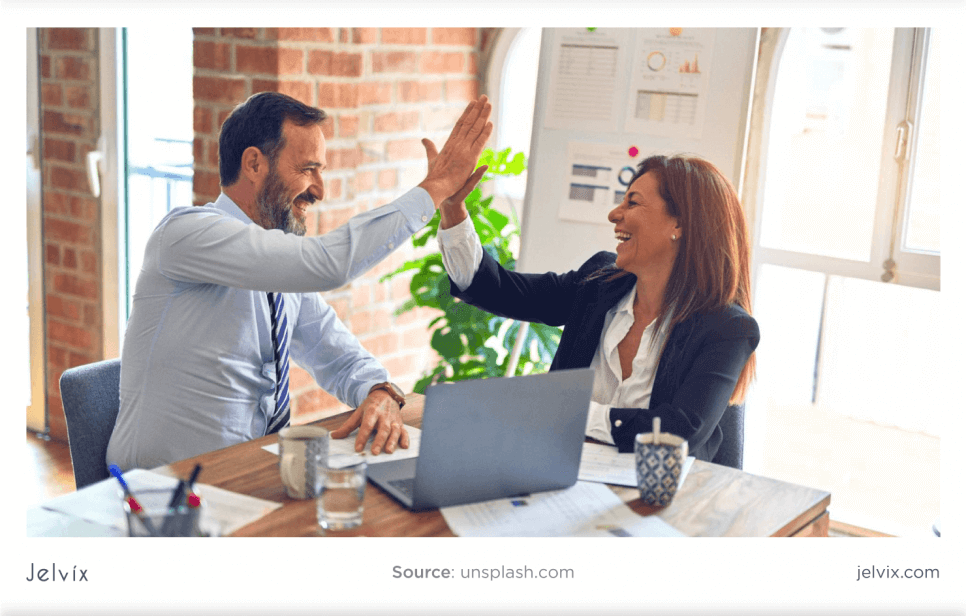 To round up everything covered in this article, it’s worth looking at some major CEO and President statistics to understand what the job market for these positions looks like: 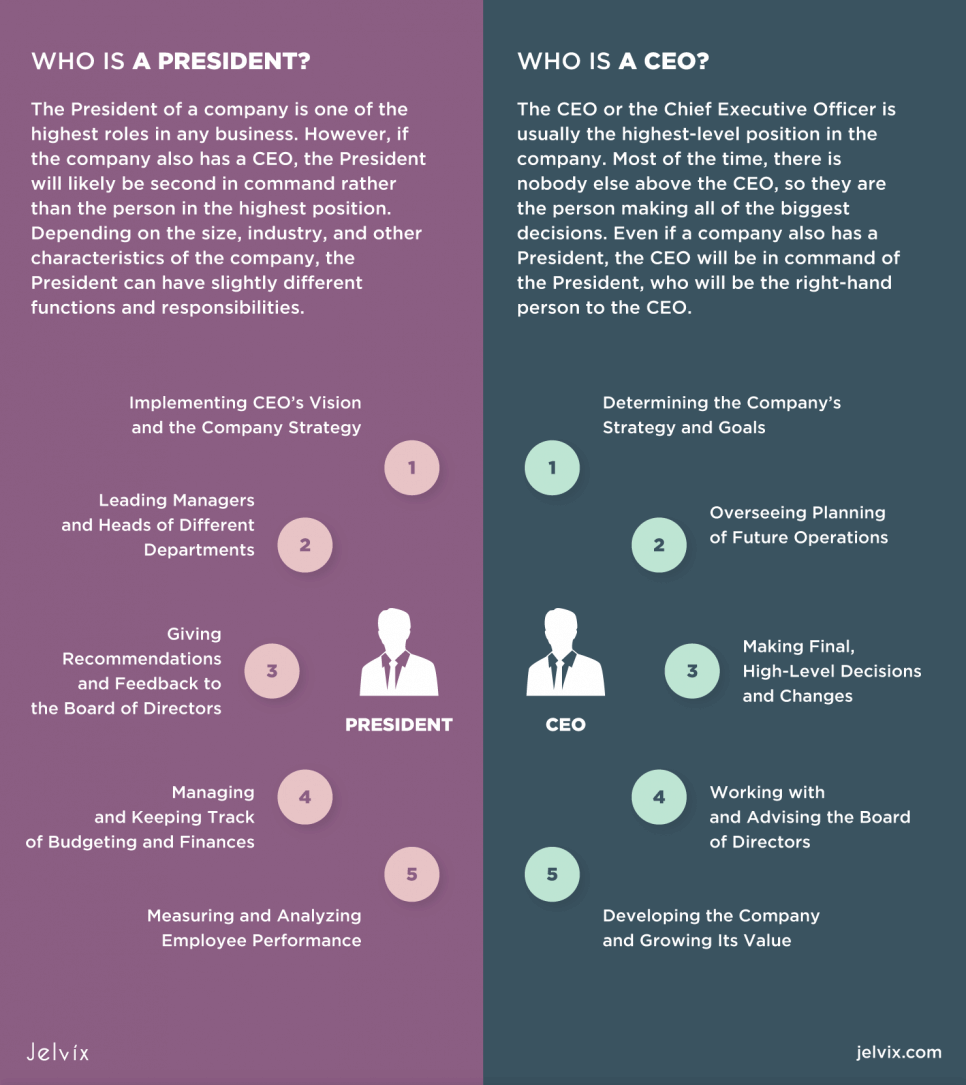 All in all, both the CEO and the President have a lot of power in the company, but these are not the same positions. CEOs have their own responsibilities while Presidents perform other tasks. Nevertheless, they work together to make the most important decisions in the company.

If you want to become a CEO or a President, you will likely first need to get relevant education and experience before you can advance on your career ladder. Use this article to get an idea of who CEOs and Presidents are and to determine which role you would like to aim for in the future.

Mary Landers is a freelance writer with a broad outlook. She currently works as an Editor at Ratedbystudents reviewing a variety of writing services websites. She is also actively involved in writing articles for the Topwritingreviews review website. The main topics of her materials are business, marketing, and education.

E-Commerce vs E-Business: A Comparison Guide

How To Implement Business Process Improvement

5 Tips to Dramatically Grow Your Business